He’s the brains behind the Monster… and he has the jar to prove it! NECA’s Universal Monsters x Teenage Mutant Ninja Turtles has just released Leonardo as The Hunchback! Ready to unleash some chaos, The Clown Prince of Crime, The Joker Titan, has been released from McFarlane Toys! Ready for battle, Sasuke, Sakura, and Naruto have joined the S.H. Figuarts line! It’s a bird, it’s a plane… no, it’s the New 52 Amazing Yamaguchi Revoltech No.027 Superman from Kaiyodo! McFarlane Toys has released the Future State: Dark Detective DC Multiverse Batman & The Next Batman Action Figures for pre-order! The Justice League has teamed up to stop the Endless Winter, and they are here to help you create the villainous Frost King with McFarlane Toy’s new Collect-to Build figures! The All-American hero has gotten a new look with the collaboration between Marvel Comics and Bandai Spirits in Tech-On series, and Captain America does not disappoint as the newest release! There are now new, epic additions to the Gundam Universe line! Bandai Spirits has unleashed a plethora of new model kits including: Gundam, Digimon, Kamen Rider, Ultraman, Pokemon, and more! Kick some Alien butt alongside Ellen Ripley with this Aliens MODEROID Ripley & Power Loader Model Kit, recreating the iconic scene in the 1986 film “Aliens”!

Recreate the epic shoot-out at the Nevarro Cantina with the just arrived Star Wars: The Vintage Collection Playset from Hasbro! This just in – more Star Wars: The Black Series figures! Pow! Batman and Robin from the Batman Classic TV Series have entered the scene, and the BBTS New Arrivals Page with the Mezco Toyz 5 Points Box Set! By the Power of Grayskull – the Masters of the Universe Castle Grayskull has arrived! Hasbo’s Lightning Collection Eye Guy from the Mighty Morphin’ Power Rangers is now in stock! The Kotobukiya lines ArtFX, Bishoujo & more are now in stock! The battles can finally begin with the newly arrived WWE Elite Collection Series 90 figures from Mattel! Newly arrived are some of our favorite Anime Heroes from Naruto and One Piece as part of the Bandai America figure line! Another 5 Points Box Set from Mezco Toyz is here, featuring Ultraman and Red King! From the MAFEX line, you can now add the Avengers: Endgame Iron Spider and Spider-Man: Far From Home Spider-Man to your cart! 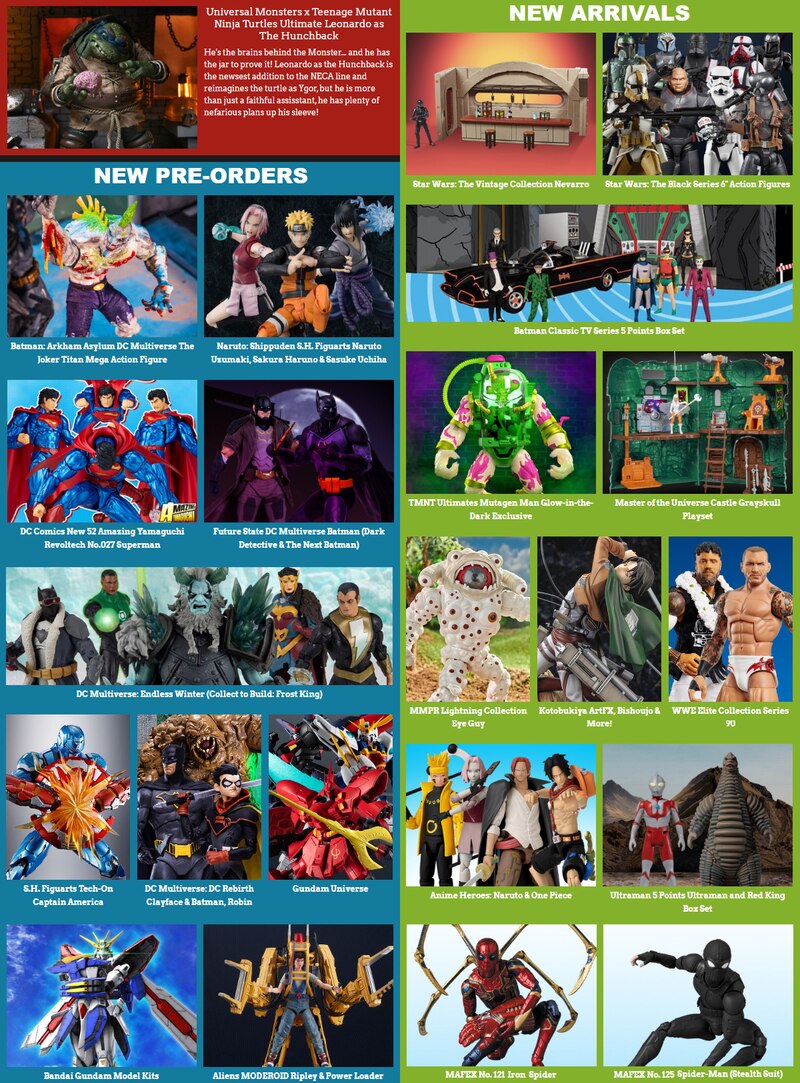