News just in from Promobricks a German fans site reporting what is said to be a LEGO branded product for the Transformers Optimus Prime. The 1508 pieces builder kit is said to include a jetpack, weapon, and transform into a truck as well. It is reported to be selling for 169.99 euros / $192 USD to be released initially in May 2022 with a wide retail release on August 1, 2022. Read on to see the translated news with product info below.

In addition to the price of 169.99 euros in Germany, we can also tell you exactly which transformer it is. We have been informed that the set will depict the leader of the Autobots, Optimus Prime. This is said to be equipped with a jetpack and a weapon, and the set will also include a data plate like in the LEGO Star Wars UCS sets. Unfortunately, we can't tell you yet if the set will be more of a classic version of Optimus based on the animated series, or if it's based on the movies.

However, we assume that the set will actually be inspired by the upcoming film Transformers: Rise of the Beasts, which is not scheduled to hit theaters until June 2023.


The Instagram shared promo shows (see below) the Studio Series SS-44 Optimus Prime stock image from what I can tell, but the report states it is likely a Transformers Rise of the Beasts version. This is definitely preferable and will be exciting to what LEGO would do with this. Read the full German-language article now at promobricks.de. 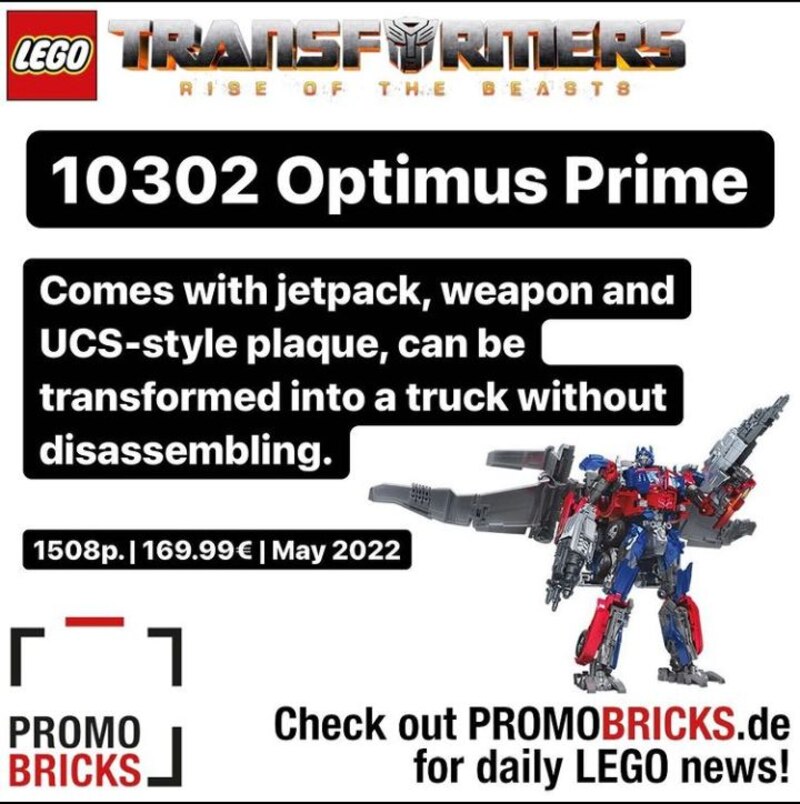