Look upon the future and tremble! – The Uncanny X-Men’s Apocalypse is now available for pre-order! The Black Series – Hasbro has released a slew of Star Wars: The Black Series exclusive figures! Bandai Exclusives feature the newly released Gamma 1 / 2 from Dragon Ball Super & more! A very judgy judge, the Chief Judge Caligula joins the PX Previews line of 2000 AD figures! Be sure to check out even more Star Wars: The Black Series and The Vintage Collection releases! Valverse is excited to present the latest Action Force 1/12 Scale recruits! Based on the original 1987 Predator film, this massive action figure marks the triumphant return of the Jungle Hunter! AzureSea Studio has unleased Windblade, Optimus Prime & more as impressive statues! "I am no longer Borg, but the prospect of becoming human is... unsettling. I don't know where I belong."- Well this Exo-6 Seven of Nine figure belongs in your collection of museum grade collectible Star Trek items! From the Vitruvian H.A.C.K.S. universe, comes the EPIC series - a realm where life is larger and filled with unknown creatures! Takara Tomy and Hasbro have released more of your favorite Transformers! Check out the latest import figures and statues like the Fire Emblem: Three Houses Pop Up Parade, The Quintessential Quintuplets Nendoroid & More! Pixar and Disney are ready to take Toy Story fans to new realistic heights with the release of 'Lightyear'! From the Tromaville Dumps to your collection! The new Super7 Toxic Crusaders ULTIMATES! figures are here to help you relive the fight against pollution and the alien invaders from planet Smogula! From the My Hero Academia anime Endeavor joins the Amazing Yamaguchi action figure series! Inspired by the video game Dark Souls comes a figure of The Nameless King!

Go Go Cowabunga! – the epic MMPR x TMNT Lightning Collection figures are here! The Bandai Spirits Dragon Ball Vs. Omnibus Super Ichibansho figures have arrived! Check out the in-stock Mattel Masters of the Universe figures! This in-stock Studio Series 86-14 Voyager Class The Transformers: The Movie-inspired Junkheap figure converts from robot to motorcycle mode in 22 steps - but it only takes one click to add it to your cart! Mattel’s Jurassic World Hammond Collection, Roar Strikers & More have arrived! The Star Wars: Rebels Premium Format Ahsoka Tano Statue is now in stock! The Iconic Batman cars have arrived as Hot Wheels! Red Sonja is known as an outlaw, mercenary, warrior, and queen – and is now in stock from Executive Replicas! He is here and hungry for a chimichanga – the S.H.Figuarts Deadpool has arrived! Add to your model kit collection with the in-stock Mobile Princess model kits! Plenty of anime & video game figures from Banpresto have arrived! Spruce up your wardrobe with a BBTS exclusive T-Shirt! Continue collecting your favorite video game characters with the in-stock World of Nintendo 2.5 inch figures! Live Long and Prosper with the newly arrived Star Trek: The Original Series Mirror Universe Mr. Spock! Beast Kingdom's Entertainment Experience Brand presents the in-stock Powerpuff Girls D-Stage DS-094 Have A Nice Day Statue diorama! All your favorite Dune characters have been brought to life – The Dune Playing Cards from Theory 11 have arrived! RoboCop’s Enforcement Droid is here to make sure you add some Hiya Toys figures to your collection! The G.I. Joe and Power Rangers Role Playing Games have arrived!

Shop ALL the BigBadToyStore Preorders and New Listings Now! 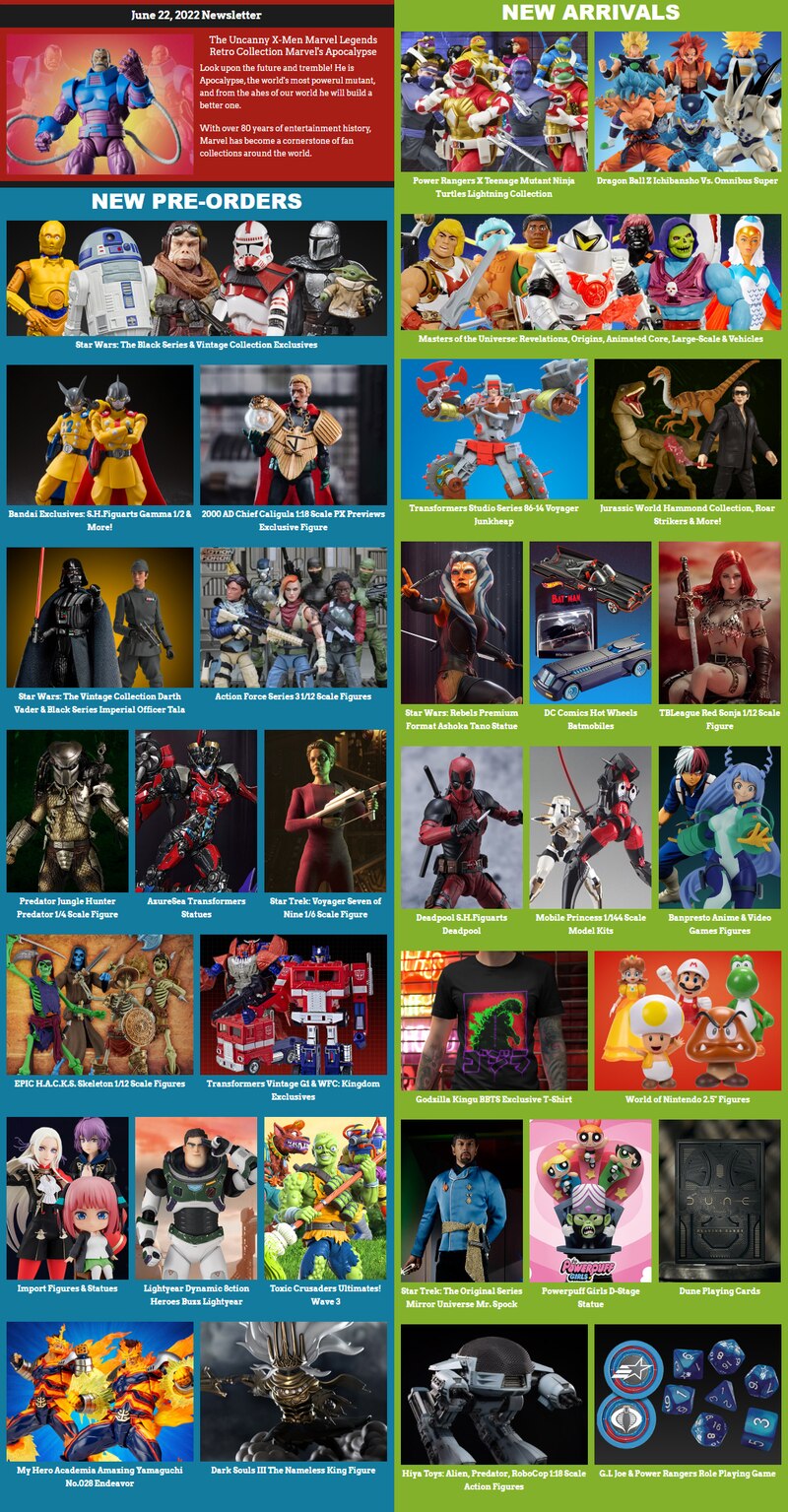