by jack on February 15, 2003
TRANSFORMERS ARMADA BY HASBRO IS A BIG SUCCESS WITH KIDS

A New Fantasy and Powerful Foe are Introduced in 2003

With soaring sales in the last two years, including a double-digit increase in sales in 2002, it is clear the re-introduction of the TRANSFORMERS ROBOTS IN DISGUISE, the authentic vehicle-to-robot action figure brand, and new TRANSFORMERS ARMADA themes have again clearly captured kids' imaginations, as the TRANSFORMERS brand has for nearly 20 years.

This year the battle rages on with OPTIMUS PRIME and the AUTOBOTS against MEGATRON and the DECEPTICONS for control of the universe and the power source provided by the MINI-CON TRANSFORMERS vehicles. But there's a new twist -- kids and adult fans alike will be thrilled with the fall 2003 return of UNICRON, the most evil TRANSFORMERS characters ever, in Hasbro's toy line and in new episodes of the animated program on Cartoon Network, "TRANSFORMERS ARMADA: THE UNICRON BATTLES."

Another new highlight in fall 2003 is the TRANSFORMERS UNIVERSE. UNICRON has devised an evil plot to harness all the "energon" in the universe in order to increase his own power. Knowing that when TRANSFORMERS battle they emit energon, he summons DECEPTICONS from all parts of TRANSFORMERS history. PRIMUS responds by building his own army of AUTOBOTS. This is building into the biggest battle the universe has ever seen.

Kids and fans will want to book mark www.transformers.com, where new facts, figures, photos and inside scoop about the latest TRANSFORMERS releases will be posted throughout the year. Here's a complete look at the 2003 TRANSFORMERS line. All figures are recommended for ages five and up.

In 2003, the hot TRANSFORMERS ARMADA segment grows with seven assortments, new trademarked characters introduced every few months and new MINI-CON figures in every package to unlock more features and activate new ways to play with TRANSFORMERS figures. The MINI-CONS, a lost race of TRANSFORMERS, are powerful robots whose energy source is sought after by the AUTOBOT and DECEPTICON robots. A universal connector system allows for any MINI-CON figure to attach to larger TRANSFORMERS ARMADA figures, to create new play patterns by unlocking new features such as lights, sounds or projectiles. MINI-CONS come packaged with every larger TRANSFORMERS ARMADA figure, and are also sold as 3-packs in a separate assortment. Kids will also get a special ARMADA surprise with each figure, either an in-pack bonus decal or a comic book. MINI-CON figures will include the comic book and all other figures will also include decals.


MINI-CON ASSORTMENT (Approximate retail price: $6.99) Collect and discover what can be unleashed! Each trademarked figure in a themed 3-pack team of MINI-CON figures changes into a robot and back again, and either combines to form a larger accessory, or has a feature, such as projectile play. The highly collectible MINI-CON figures attach to all larger TRANSFORMERS ARMADA figures. New themes and characters throughout the year include:

Each deluxe figure comes with a MINI-CON figure that unlocks new action features in both the heroic and evil character figures. For example, OPTIMUS PRIME is a heroic semi-truck that changes into a fully articulated robot. He comes with MINI-CON jet OVER-RUN, which activates a punching action when attached to the OPTIMUS PRIME robot.

The evil guys also use MINI-CON FIGURES to activate a new play feature, like WHEELJACK, a DECEPTICON sports car with wheels that pop open to reveal projectiles when WIND SHEER, the stealth fighter MINI-CON figure is attached. Thirteen new trademarked deluxe figures will hit stores throughout 2003, including:

August:
WHEELJACK with WINDSHEER
HOIST with REFUTE
AIRAZOR with MINI-CON.


MEGA FIGURE ASSORTMENT (Approximate retail price: $19.99) Attach MINI-CON figures to unlock sounds in the Mega assortment, which features six new trademarked figures in 2003, including SCAVENGER (available in January), a bulldozer with ROLLBAR, an off-road custom car. In robot mode, the SCAVENGER figure's feet will stamp, making a stomping sound. ROLLBAR can sit in the cockpit of the bulldozer to create the sound of a starting engine. In August, the assortment features OVERLOAD, a weapon base, complete with electronics and MINI-CON ROLLOUT figure, that can be pulled by the OPTIMUS PRIME truck cab or carry the JETFIRE shuttle. Also, combine the OVERLOAD weapons base with SUPER OPTIMUS PRIME to create new armor for OPTIMUS. The other new MAXCON figures include:

August:
SKYWARP, a jet, with MINI-CON

One of the largest and most action-packed of the TRANSFORMERS ARMADA figure assortments, ultra figures are super-enhanced with electronic lights and sounds and MINI-CON storage areas. Kids will love combining future shuttle JETFIRE (available in January) with the SUPER OPTIMUS PRIME figure (sold separately) to create an awesome new OPTIMUS PRIME flight mode.

The villains are in on the action too, with the DARK FLEET (available in August) a three-vehicle set that combines to form TIDAL WAVE a massive warship. Each trademarked vehicle in the DARK FLEET can combine with the MEGATRON or GALVATRON figures to become added armor for the DECEPTICON leader. Also available in the ultra assortments:


DELUXE ARMADA ROLE PLAY (Approximate retail price: $14.99) Boys can act out the TRANSFORMERS ARMADA fantasy with two kid-sized role play swords featuring changing colors and sound effects available in August. The AUTOBOT STAR SABER SWORD and the DECEPTICON DARK SABER SWORD play an important role in the program as both the AUTOBOTS and DECEPTICONS battle for control of this powerful weapon.


SUPER BASE ASSORTMENT (Approximate retail price: $39.99) A new design for the OPTIMUS PRIME truck, this stupendous base has two parts -- a truck cab that changes into a robot, and a trailer that opens by itself to become a MINI-CON base station. Combine the two parts to form the super robot, POWERLINX OPTIMUS PRIME. Complete with a new MINI-CON figure, it is available in August.

The evil UNICRON, who first appeared in the TRANSFORMERS movie, is a huge 16-inch robot -- one of the biggest TRANSFORMERS character ever created! ARMADA UNICRON is one of the major highlights of TRANSFORMERS ARMADA -- THE UNICRON BATTLES line in 2003. UNICRON is a planet that changes into a robot, trying to take over control of all TRANSFORMERS. Available in August, this most evil character can hold up to 24 MINI-CON figures, and has projectiles, light-up hands and eyes, traps and hiding places for MINI-CON figures and much more.

October:
2-pack of TANKOR and OBSIDIAN 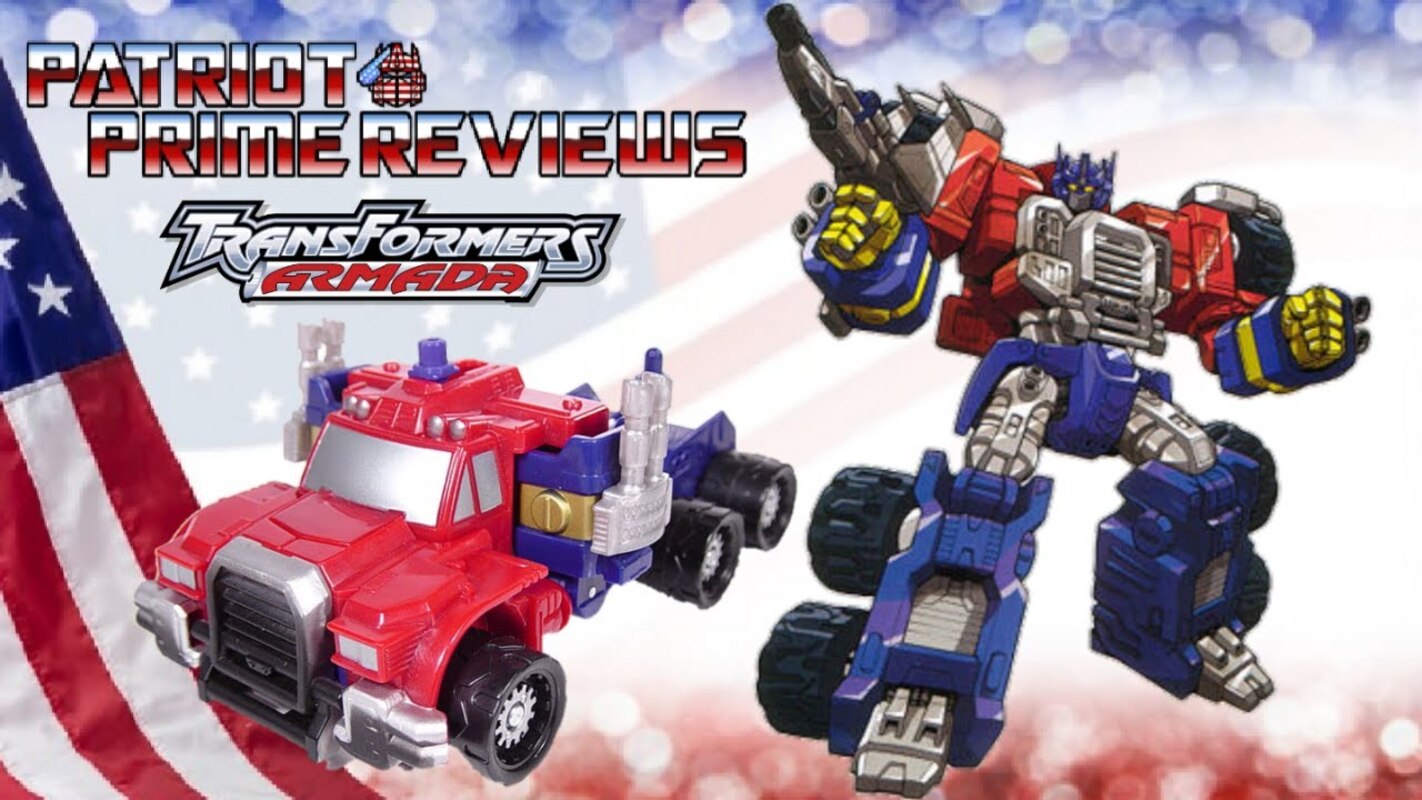 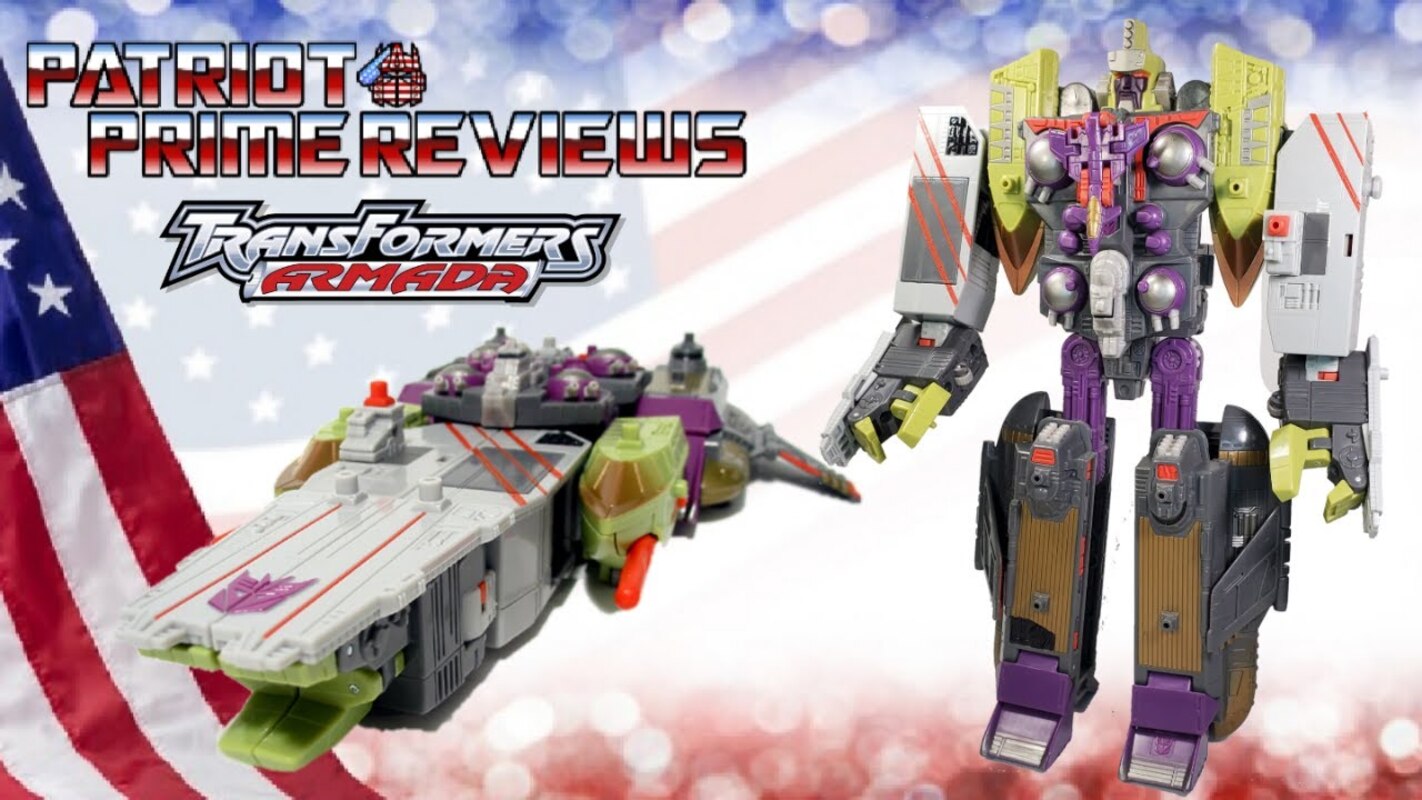 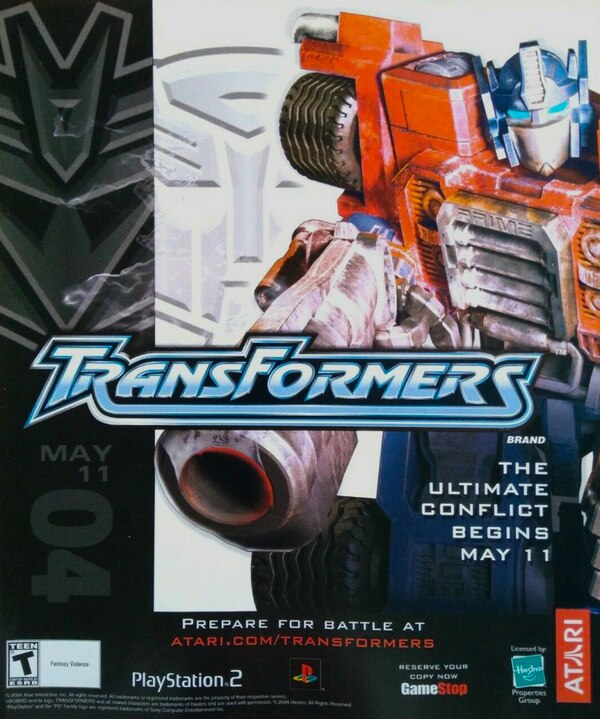 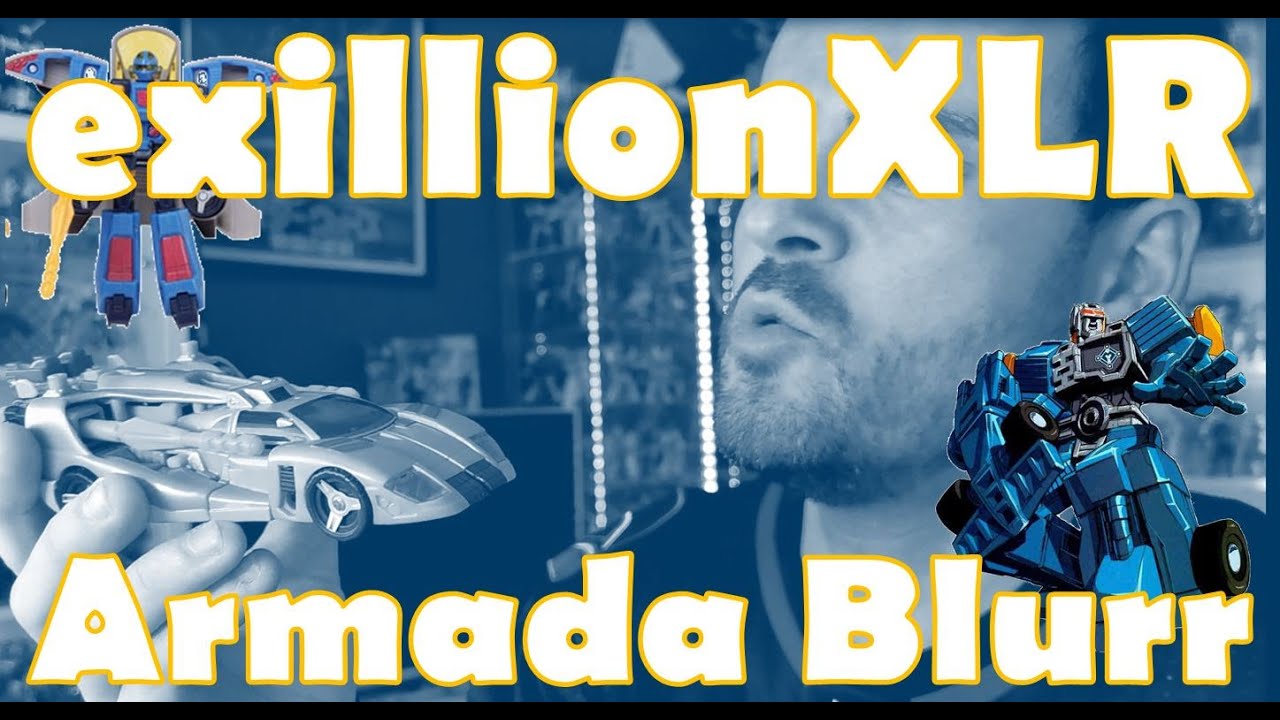 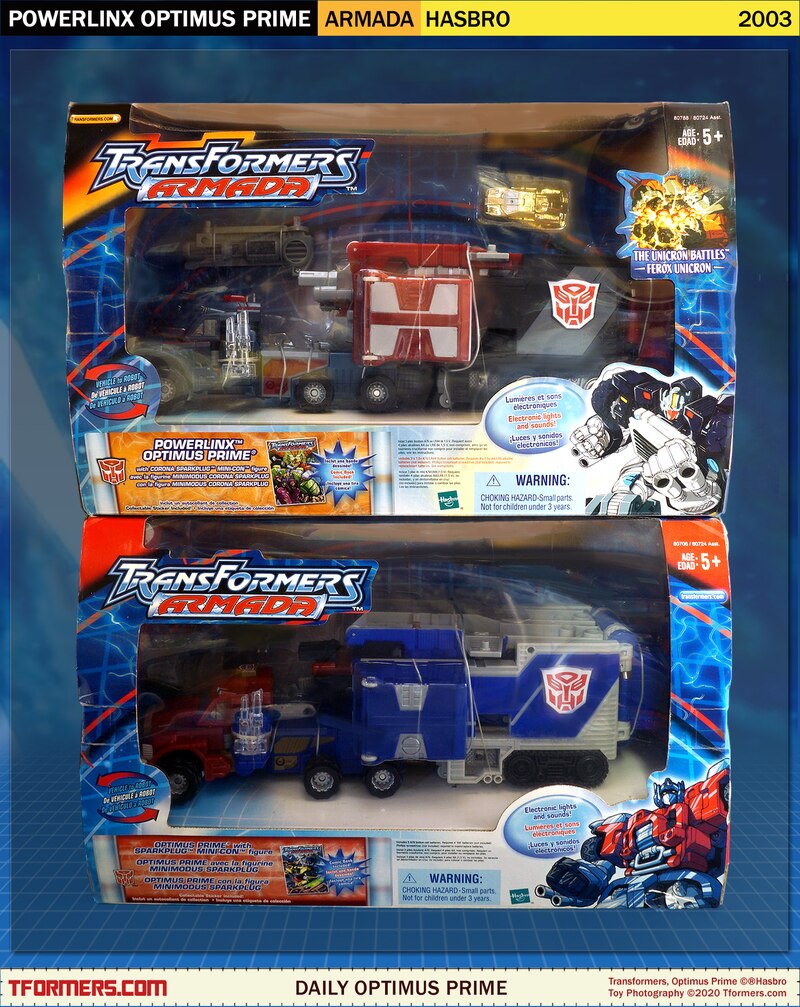