by Primus on December 30, 2008
Following up with the Empire Magazine Online image previews, the magazine article offers up quite a few details on what we are going to see in the Transformers: Revenge of the Fallen film itself. According to the magazine Michael Bay and Shia LeBeouf are quoted giving us some hints at the origin of The Fallen, how the Pyramids tie into the story, Megatron and more! 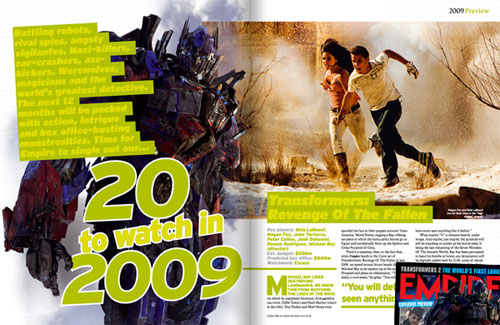 According to the article, Michael Bay and Shia LaBeouf have both confirmed the Fallen character is a separate individual. Bay used the term "Apocalyptic" to describe him.

The movie scenes at the Pyramids in Egypt are actually part of the trilogy's story. It is discovered, we can assume by Spike and Mikaela, that those mysterious hieroglyphics mankind has wondered about for so long are really illustrations telling a story of giant robots who visited Earth long ago.

According to Michael Bay, Megatron really is dead. The Decepticon leader Megatron will NOT return in Revenge of the Fallen. The images going around are for a new action figure Hasbro is releasing.

The article states there will be approximately forty robots in the film.

The budget for sequel, Transformers: Revenge of the Fallen was stated to be $200 million.

The human seen holding onto pole while cars hurl through the air in the Empire Magazine images, is actor Ramon Rodriguez. He's been seen most recently in the movie "Pride and Glory" starring Colin Farrell.

He will play Leo, as confirmed in a previously-leaked call sheet.

We have seen Mr. Rodriguez in spy shots during the filming of the sequel.

The article confirms the appearance of the Devastator character who will show up somewhere in the Pyramid sequence (read past spoilers). The article goes on to state Devastator is roughly 50 feet which corresponds to the height of the camera crane used during filming.

Stay tuned to TFormers for more details as they become available.