Here at Toy Fair, Hasbro, Inc. and Activision Publishing were nice enough to team up and give us a preview of three stages from the publishing studio's upcoming video game Transformers: War for Cybertron. We were originally scheduled a hands-on preview, but Jason from Activision put a caveat out there that what was being shown today was not final at all. That being said, he also said that he really wanted to show us the game.

First of all, the game play. He says that is you have picked up Gears of War or Gears of War 2, then when you pick up the controller for this game, you will feel right at home. The feel of this over-the-shoulder third person shooter will feel "instantly recognizable," which he said it two or three times just to drive the idea home.

The game is also designed to be a co-op game and friends may jump in and out of the game as they please and it will not effect your progress in the game. The example given is that when a friend who is playing the game with you needs to leave to eat dinner, s/he may choose to do so and jump in after s/he has finished his/her dinner.

Today's preview of the game showed off three locales: Iacon Under Seige, Jetfire in space, and Megatron fighting (oh yeah) Omega Supreme. It was also revealed that each mission will one of three locations on Cybertron: on the surface, in the core of, or in the surrounding space (as was featured in the Jetfire game play).

Iacon Under Seige
The first stage shows off Iacon in a very bad place. The defense systems of the city are failing and Optimus Prime, Ratchet, and Bumblebee are coming down an elevator to another room.

The three are speaking about how Megatron wants Iacon and reveal that Zeta Prime is dead.

When they arrive at their destination, Jetfire appears in a holographic feed reporting that they need to get defensive guns operation in order to fend off the Decepticons. Optimus Prime informs him that Zeta Prime is dead and he as assumed "temporary" command.

After Ratchet checks the computer to see where the controls are to turn on these guns, the three Autobots head towards their destination and fend off the drones that they encounter.

In this area of fighting, we see Optimus use his gun in vehicle and robot modes while using his axe as a melee weapon in robot mode. 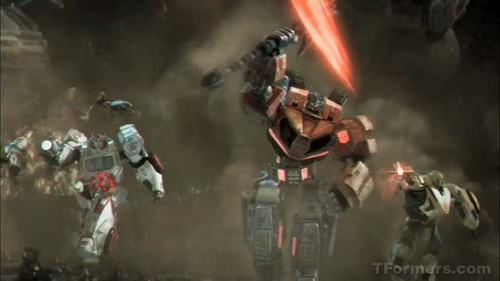 Outer Space
The next board has the player taking on the character Jetfire. He, along with Silverbolt and Air Raid, must make it to a certain area. Throughout this board, the player flies Jetfire through treacherous air space, riddled with mines and explosives, and avoids them by shooting or performing barrel rolls. 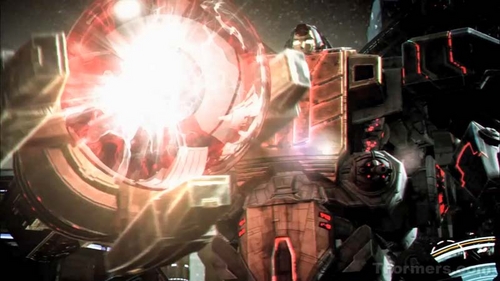 The Decepticons are going to have to fight this bad boy

The player is informed to shoot Omega's chest, but the player had some issues with this - with the rockets raining down on him and large blasts coming right at him. At the same time.

We could only catch Breakdown as one of two Decepticons that accompanied Megatron, as the player was very busy running away from Omega Supreme behind some walls. Walls that were easily blown away as soon as the player ran away from that section.

Overall Impressions
Overall, the game is looking very good. It is obviously still has some kinks to work out, but it seems to be progressing along quite well. While the reveal trailer is pre-rendered to awesome quality, the video game's graphics looked comparable. The video is cleaner and crisper than Transformers: Revenge of the Fallen: The Game and seems just as seamless most of the time.

We are obviously anticipating the arrival of the game that High Moon Studios claims that they have been waiting for 25 years to play.

They also teased that there will be quite a few announcements, including ones asked for by the fans!

We hope that we can get some hands-on time soon enough and judge for ourselves.