by BaCon on May 7, 2020
I have been wanting to take this shot ever since Takara TOMY announced the new Transformers Masterpiece MP-39+ Spinout, so here's one for Throwback Thursday. The homage to the original Diaclone Lamborghini Countach LP500S figure has an interesting history. Many fans will be surprised to know the toy along with a selection of other Diaclone toys was actually released in the USA before the Transformers were even an idea.

In 1983, Takara opened a USA office in New York and began selling their own toy lines directly. One of them was the "DIAKRON Robot/Car of the Future" toy line. With just 3 toys in the initial release, the first of them was the nameless DK-1, aka the Diaclone New Countach LP500S No. 15 from Japan. The same mold would appear in yellow for the Transformers 1984 toy-line as the Autobot, Sunstreaker. Who, incidentally is described as the Brother of "Spinout" in the Marvel Transformers Production Bible. That explains the new Masterpiece MP-39+ Spinout reissue name for those of you wondering why there is a Red Sunstreaker.
Image (click to enlarge) 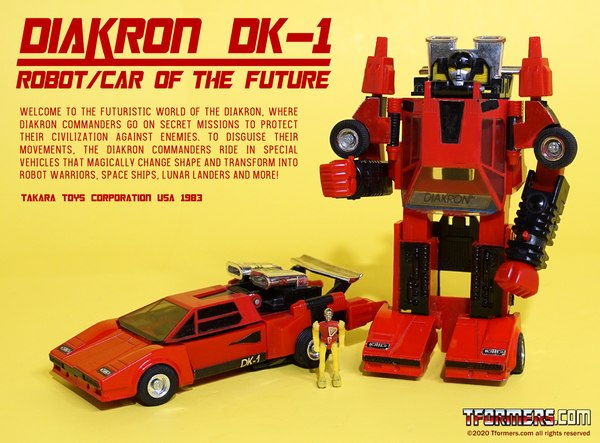