On Sunday afternoon, the Art of Transformers panel took place, though more accurately it could have been called "The Artists Of Transformers" as it took place in the form of a question and answer session with the artists of both linework and coloring in the Transformers titles. Click through and keep reading to check out our rundown of the events of the panel!

The panel started half an hour late because the "So, You Think You Can Voice Act?" panel ran long with lots of auditions. The panel is hosted by Robbie Musso, Josh Perez, Josh Burcham, and Casey Coller. After a quick introduction, they started directly taking questions from the audience. Aside from the standard fare of how to break in to the comic art industry, there were some interesting interesting questions, and some that generated entertaining responses.

Q: What's been your favorite thing to work on?
-Musso: Spotlight Ultra Magnus, plus toys like Bot Shot and Angry Birds.
-Perez: Getting to work with Naoto Tsushima.
-Burcham: Timelines online comic that was the follow up to Machine Wars.
-Coller: Combiner Wars covers, getting to see toys before anyone else for reference material.

Burcham then added that one page of MTMTE could take four hours to color when he was working on it, though longer when Alex [Milne] was being Alex and filling pages with crazy detail.

-Coller: As long as it takes to send an e-mail (he doesn't color).


Q: Is there pressure to work faster now?
-Perez: No editorial directive, but personally wanting to do more faster to get the work where everyone can see it.
-Coller: With Combiner Wars coinciding with toys, there is more of a pinch to get something done far ahead of when it will be seen.


Q: Do you have a favorite character to draw? Comic world inspiration?
-Musso: Any of the G1 characters.
-Perez: Bumblebee, but any Transformer with a fun shape
-Burcham: Optimus Prime, but anyone with a faceplate, because of the challenge to make them expressive. He's inspired by Geoff Senior.
-Coller: Jazz. He likes guys with faces and clear personalities. Inspired by lots of TF artists, especially the guys named Josh.


Q: First professionally drawn (or colored) Transformer?
-Coller: Megatron for a comic cover.
-Burcham: Not sure, but someone from a profile book.
-Perez: Shatterd Glass Steeljaw for FunPub, and the first colored was Wheeljack.
-Musso: Spotlight Ultra Magnus cover


Q: How much freedom do you have in color or design of the characters?
-Musso: With the earlier series, every book kind of had its own visual style, and when a new character was introduced the artist had pretty much free reign.
-Perez: The artists usually have a set idea of the coloring, and while there's some variation allowed, it doesn't go too far.
-Burcham: IDW is cool with them doing their own thing, and everyone brings their own style. And freedom in colors is given, within reason. If it's not specific in the script, coloring details are basically up to the color artists.
-Coller: It's pretty rare to see any feedback to change things. The only time Coller remembered getting a note back on from Andy Schmidt, it was the Ironhide book, when Coller was trying to homage more creative layout styles.


Q: What is the most challenging part of the job?

-Coller: Obsession with detail. Never satisfied with his own work.
-Burcham: A battle between detail and being satisfied with the work to get in on deadline.
-Perez: That obsession competing with a hard deadline can also be positive, because you learn to start accepting your flaws a little better.
-Musso: There is a balance between doing best work, and getting it in on time. And getting ahead to have buffer space built up just in case.


Q: Funny stories from working professionally on Transformers?
-Perez: From Dreamwave, working on the Energon issue with Tidal Wave vs Ironhide. Tight deadline, trying to stay awake, up for three days and using caffeine pills. After he was done, he went and started watching TV, until someone asked him what he was doing. When he replied that he was watching TV, the other person informed him the TV wasn't even turned on.
-Coller: He thinks he's too straightlaced, so any stories he would have would just be tragic. He said it was funny when they made him redraw half an issue. Hilarious.
-Musso: Spotlight Ramjet - Drew two pages of Skywarp in classic body, when character was supposed to be in a different design at the time, so he had to redraw it separately and Photoshop the art back together.

At this point the panel was cut short so the script reading could still take place according to schedule. 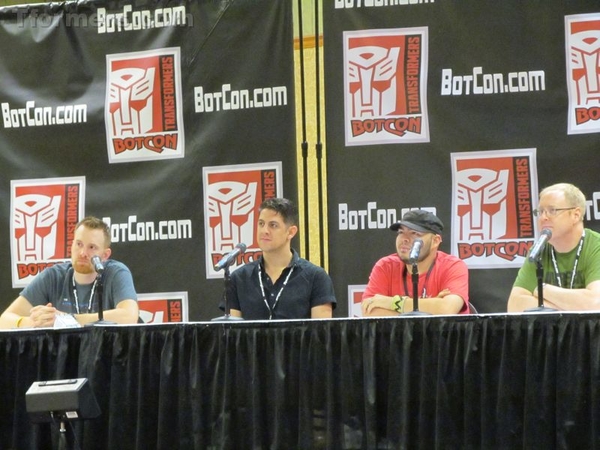