BotCon 2016 - BotCon Over The Years: The Last Panel Of The Last BotCon

We were on hand for "BotCon Over The Years," the last panel of the last BotCon! Pete Sinclair led the presentation, reminiscing through his personal collection of BotCon photos and asking fans to share their own stories about the 22-year history of the social core of the Transformers fandom as it came to a close. Keep reading for details! UPDATED with some more details provided by longtime BotCon attendee Tim Finn!

We opened with a letter from Jon and Karl Hartman, who expressed gratitude to Pete and the Fun Publications staff for their efforts as the caretakers of the BotCon name and experience, and for maintaining a place for Transformers fans to meet and make friends. At the close of the letter reading, the pair (who were in attendance) received a standing ovation. 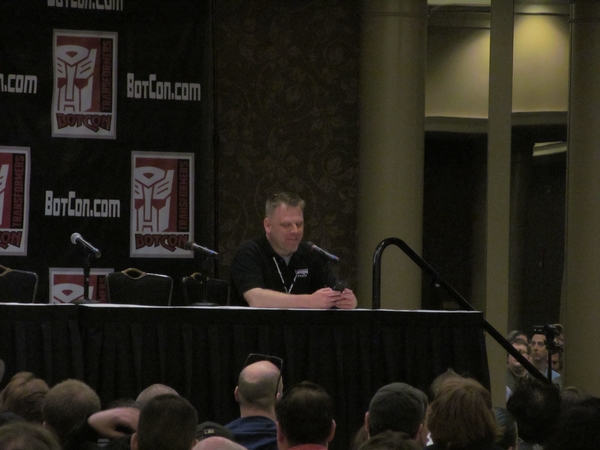 Sinclair had been a bit late to the panel as he had to see to his other responsibilities throughout the con. As such, there'd been no chance to digitize his entirely analog photo collection, and so we continued with an impromptu slideshow. 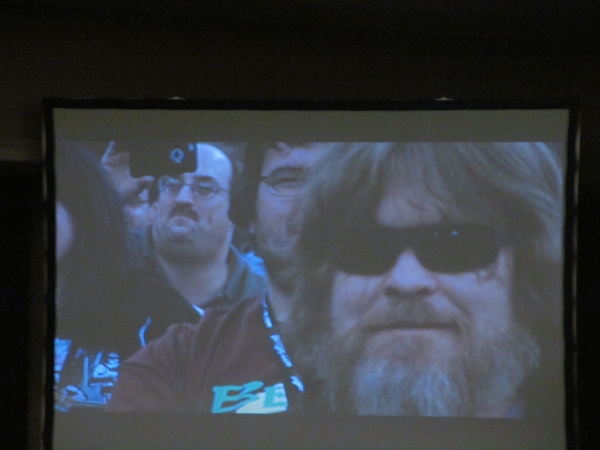 In between slides, we were treated to the antics of a shaggy gentleman as well as the visage of fandom fixture and Radio Free Cybertron member "Headmaster" Don Ferguson (left, with camera). 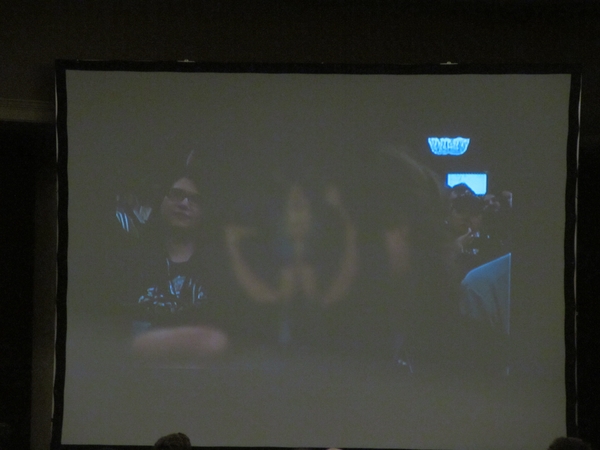 Sinclair recalled that when the prototype for G1 Unicron was shown at an early BotCon (shown here during focusing issues with the panel camera), there was a constant refrain of "can we fix the arm?" But seemingly either nobody was permitted (or brave enough, and who can blame them?) to adjust the one-of-a-kind prototype. 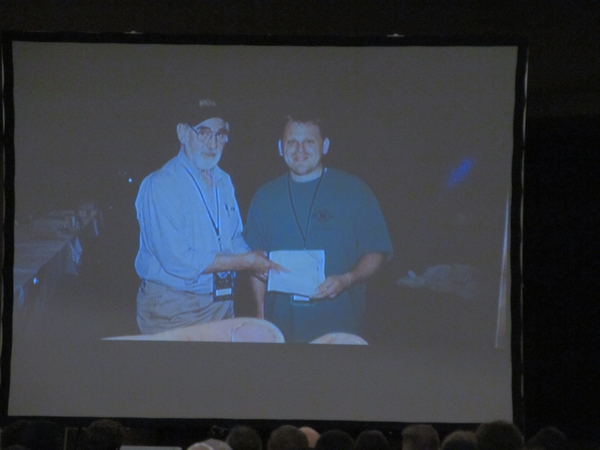 Legendary voice director Wally Burr and the script reading he directed were among the highlights. Sinclair was unsure if he should mention it, but said that Burr - who he has remained friends with - is in shaky health and asked if we would all send positive thoughts his way. Speedy recovery and good health to you, Mr. Burr! 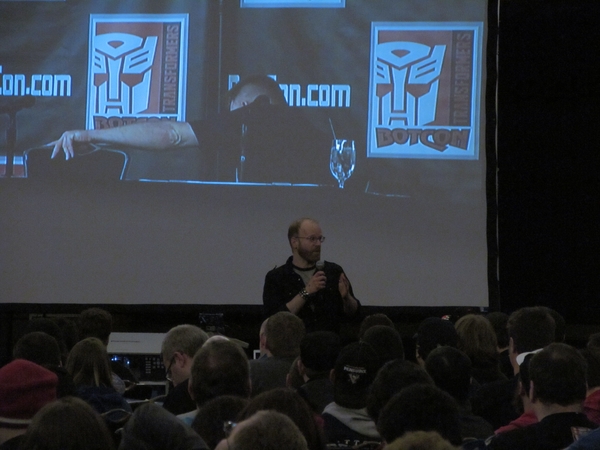 The first BotCon lasted a single day, boasting 125 pre-registrants and 50 walk-ins. It was said that the entire convention fit in the space of the conference room the panel was taking place in. Attendee Tim Finn got up and spoke about his trip at the age of 16, and how his father made him propose a detailed budget before allowing him to go. He arrived late and the showing of the Hartmans' collection had already ended - but he got in to take photos after all. It was an interesting story - and I wish we'd gotten to hear more stories of the early shows like that.

A video titled "BotCon 2001: Above and Beyond" was shown, showing off the dealer room of the year and interviewing a few of the attendees. The video was originally included on the Rhino The Transformers Season One DVD Box Set, released in 2002. Fan David Mack (who appears in the documentary, along with Finn) happened to have a copy ripped to a thumb drive, and he and Brian Savage elected to show it to the crowd. Glad he did - as someone who had never attended a BotCon before it was interesting to get a closer look at the history of the show. One young woman recalled meeting her boyfriend at a BotCon. The person next to her opined "That is so creepy. But so cool!" To which a member of the audience responded "It is NOT creepy!"

Then Pete took a moment to thank all of the helpers and volunteers and support staff that help FunPub - a company with a permanent staff of 7-8 people - to make BotCon happen. Without them, a con of this scale would be simply impossible. 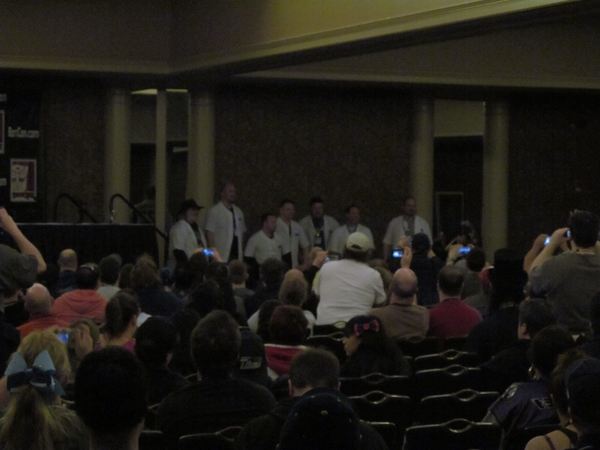 Next, at the audience's behest, Sinclair led the audience in an exercise where everyone rose from their seats and were instructed to sit down via the number of BotCons that had been attended. In the end, only six people in the audience and Pete were still standing: the only seven people to have attended all twenty-two BotCons. As members of this exalted few, they were all presented with custom jerseys with the number 22 on the back. A round of applause was given for the band as they posed for a photo together.

Running long, Pete opened the panel up to questions from the floor. Most expressed gratitude to the past and present operators of BotCon for being an important part of their lives. One man said that BotCon had been his honeymoon destination - as well his post-divorce vacation. ("Separating couples since 2007!" Brian Savage joked.) 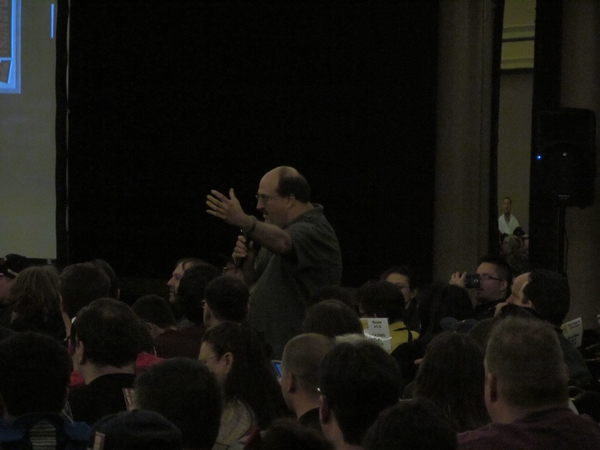 Headmaster Don had already given his thanks quite eloquently the previous day, however, and so asked if there were any unproduced figures that Pete regretted. Sinclair said that with 220 toys just since he'd come aboard on the toy-production side, there wasn't room for much regret - but that he wished that two upcoming ideas had time to be produced: a remold of Generations Armada Starscream as Beast Machines Jetstorm, and a Shattered Glass Rodimus from the Generations Springer mold. (Essentially, Shattered Glass Cloud Rodimus.)

Afterwards, Pete thanked Brian Savage for the opportunity to work for FunPub and spoke of how kind Savage had been to the Sinclair family, providing a very generous donation for a much-needed therapy dog for Pete's son. He wished that the internet at large could have a better sense of Savage, a man who is fiercely loyal to his employees.

Jon Hartman closed out the panel, just as he had opened BotCon in 1994. He expanded on an anecdote Pete had begun earlier: the first time Peter Cullen was a guest of BotCon, they rented a Dodge Magnum to pick him up. Cullen politely declined and elected to drive his own Porsche to the con, drag racing with the rental car along the way!

Hartman was beginning to feel the return of the bittersweet feelings of the previous Last BotCon in 2004. He opined that even Star Wars doesn't have as close-knit a fandom as Transformers, since Star Wars cons only happen every few years or so. He thanked everyone and hoped we'd all meet again. He joined Brian Savage in exhorting us to meet up wherever we can, whenever we can, and not lose the chance to meet each other face to face.

And that was it. The last panel of the last BotCon.

It's remotely possible that this will not hold the status of the final BotCon forever, but it's difficult to see how that would change anytime soon. FunPub retains the rights to the BotCon name, and Hasbro has trademarked "CybertronCon" - the name used for official Transformers cons in other territories - for use in the US. And Hasbro isn't yet prepared to announce any concrete plans.

There are any number of Transformers conventions of the unofficial persuasion but, barring an unforeseen transfer of rights of some variety, the long era of BotCon being the event for a large part of the fandom is officially over. It's still unknown what comes next... but whether we find out in 2017 or not, "nothing" is an unlikely answer in the long term.


Thanks to Tim Finn for providing some important clarifications and identification as to what was shown at the panel and who spoke! 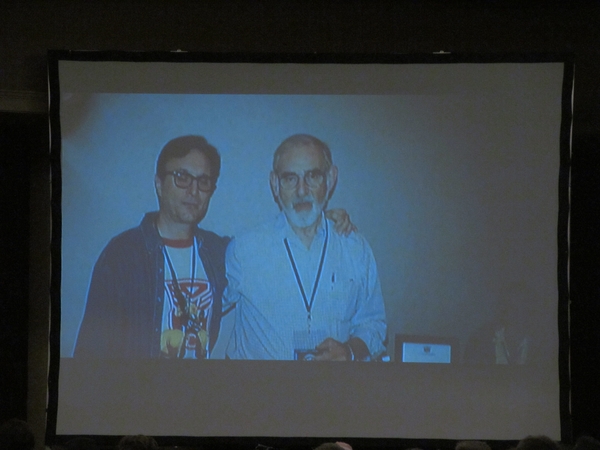