The 7th Beijing International Film Festival is underway in China, and Paramount was there to promote Transformers: The Last Knight! In the process of doing so, China.org reports, Paramount Chairman Jim Gianopulos and President of Worldwide Marketing Megan Colligan revealed the location for an upcoming 10th Anniversary Celebration as well as the Chinese street date for the TF5 toyline. Keep reading for more info!

The 6 million votes in an online poll pointed to the city of Guangzhou, Guangdong Province, as the location to mark the anniversary, unveiled Jim Gianopulos, the new Paramount Pictures chairman, and Megan Colligan, the president of Paramount's worldwide marketing and distribution at a press conference held during the 7th Beijing International Film Festival.

Colligan thanked Chinese fans' support for the franchise as the previous four installments grossed 3.8 billion yuan (US$551.84 million) in China. The fourth installment, shot partly in China and starring Chinese star Han Geng and Li Bingbing, raked in 1.97 billion yuan (US$320 million) and was once the biggest grossing film ever in China until it was dethroned by later films like "Furious 7" and "Mermaid."

The worldwide total of the franchise reached US$3.8 billion.

Megan Colligan also revealed an exclusive long trailer of the new installment, "Transformers: The Last Knight," in front of Chinese press members and guests, featuring a typical Michael Bay styled explosion and robots fight on a grand scale. The new film will arrive in June alongside its brand new edition of Hasbro toys which will hit the market since April 28.

The Transformers: The Last Knight toyline hits US toystores this Monday, April 24th, with the film following on June 23rd. Paramount's presence at the Beijing festival would seem to assuage fears that distribution of the film would be impeded by financial troubles on the part of the Chinese distributor of previous films. 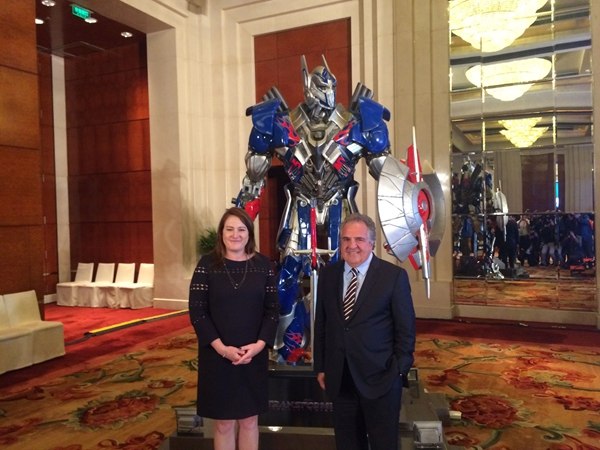