Black Friday is a great day to look at white Optimus Primes. It has been hit or miss when Ultra Magnus had to share his mold with the Prime, though Hasbro and Takara have been better about giving him his own more recently. Ironically, Combiner Wars had both a white Battle Core Optimus Prime for Optimus Maximus and a totally separate design for Ultra Magnus. Shown here are some other white Optimus Prime editions we have seen over the years, left to right: 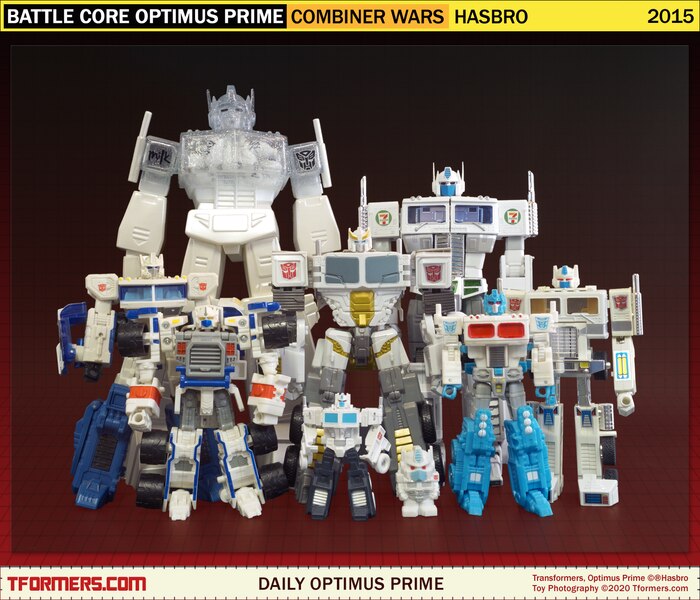 Last 10 comments - ( Read All Posts )
BaCon - 2020-11-28 @ 2:44 pm
HA! Yeah, it is a long standing issue from how the figures were carried over from the Diaclone toys for G1. IDK why they didn't switch them around. As the leader, Optimus Should have been Powered Convoy, and Magnus Battle Convoy. Oh well, we have Delta Magnus to patch things up.
TerranIV - 2020-11-27 @ 11:38 pm
I LOVE that Ultra Magnus is a white repaint of Prime. I think that is so cool. It make the fact that he is always walking around with his armor on so interesting. He is probably doing it because he either feels self-concious about looking like Prime or angry at being upstaged by his fellow mold-brother. I wish Hasbro would make more Prime white-repaints at Ultra Magnus, but just sell him at a higher price point and include his armor/trailor as an accessory.I get that Ultra Magnus usually has his armor on in the cartoon and TV show, but Ultra Magnus was originally a white Prime with armor and that is what he will always be to me. I agree we should demand that he come with his armor, but I don't understand when fans continuously harp on Hasbro making white Primes Ultra Magnus. It is like being angry that Sideswipe and Red Alert share a mold - Yeah! That is how they are supposed to look!End rant!
Post Your Comment Now! (membership required)