Mixmaster is the Constructicon of choice for Devastator Week Day Four! A crazed chemist, Mixmaster makes for a solid and striking leg for Devastator - but his Combiner Wars design has led to some controversy. Read on to learn why! 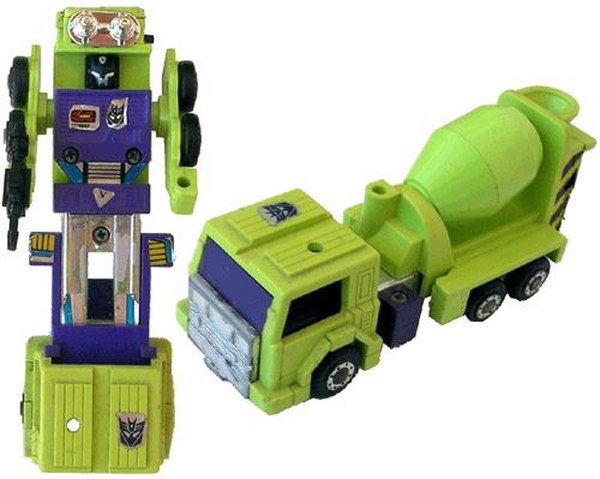 "How strong the steel, how quick the conquest."

Nothing is safe from him... he will use anything from unliving rock to living robot in making new materials. Uses acids and bonding agents to reduce and recombine almost anything inside mixing drum... a chemistry lab on wheels. As left leg module, combines with fellow Constructicons to form giant robot "Devastator".

Mixmaster is a very rectangular cement truck which becomes a very rectangular robot. He's got one of those classic G1 transformations where the cab of the truck flips around to become feet, and the arms pull out from the sides. In addition to his personal gun Mixmaster came with Devastator's Magna Laser, which thanks to a 2-stage peg he can use just as easily as the combiner can. In addition to that, he has chrome drill missiles, both a single and a double, which shoot out of the launcher above his head. This is another launcher which has been weakened relative to the Diaclone version, and would be removed entirely for Generation 2.

Mixmaster's character model is what can only be termed an over-simplification of his toy design. Excepting for his face, all silver has been removed from his design, and the tires on his arms have been reduced to a set of weird lumps. To simulate the overhang missile launcher created by the back end of the truck on the toy, Mixmaster has a very large hat with a couple of guns on it.

Mixmaster got to use his chemistry skills in the cartoon at least once, concocting an acid to try and break into the Ark. But since that's about the extent of his individual accomplishments, this is a good time for...

In season 2's The Secret of Omega Supreme, it's shown that the Constructicons - previously established as having been built on Earth as Decepticons - were in fact present on Cybertron four million years ago, and were a group of peaceful builders. They built the Crystal City and had a friendship with its Guardian, Omega Supreme. But Megatron used a device called the Robo-Smasher to make the Constructicons into Decepticons, and while Omega tried to rescue them they ultimately betrayed him and fed him to the Robo-Smasher, which deadened his emotions but was unable to convert him to a Decepticon before he escaped.

Surely, this completely irreconcilable piece of information would be the final word on the Constructicons' origins. 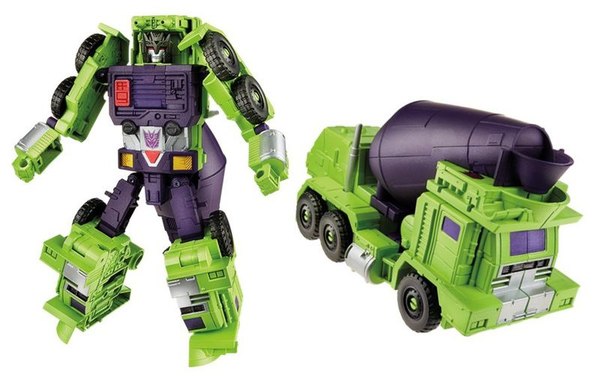 Mixmaster is based more on his animation model than his toy, though he adds back in some details from the figure. The two black circles on his midriff get slots to approximate the screws they were on the original toy, and the yellow detailing on the original's leg-blocks (the stops for Devastator's foot) get moved up to the actual hips. As with the animation, the forehead parts are, of course, drills.

In a move somehow less controversial in some circles than whether or not Scrapper has elbows, Mixmaster's Vehicle Mode has been dramatically changed from his G1 appearance, becoming a front-discharge mixer. The back end has enough details to look sort of like a cab, but it's not. Naturally, a third-party upgrade kit is in the works to make the back end of the mixer look more like the G1 cab. 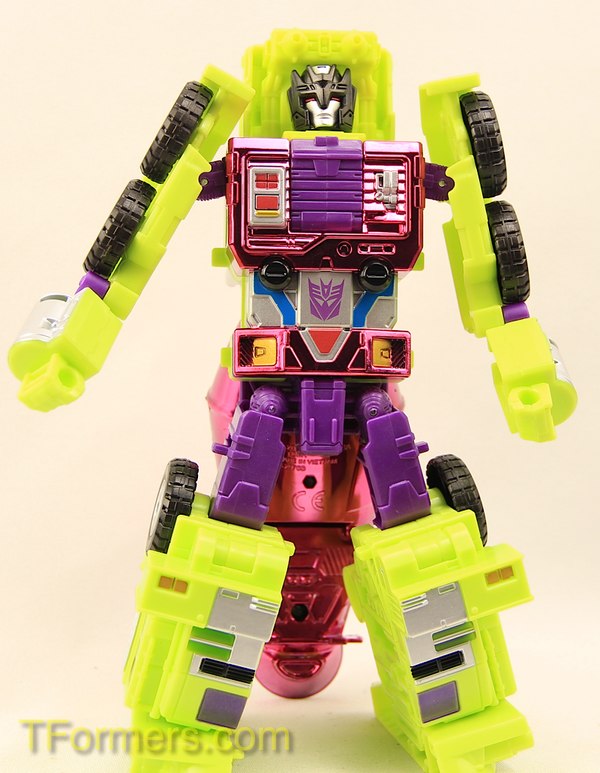 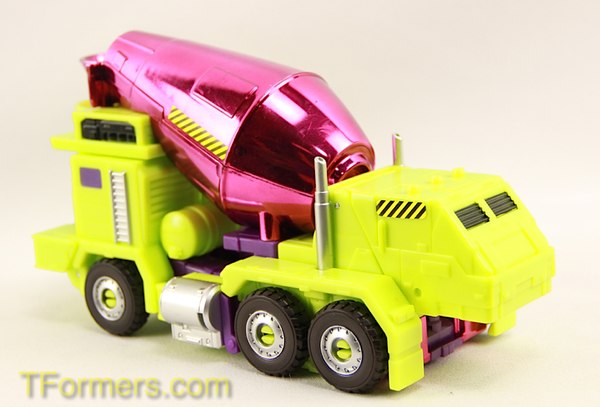 The SDCC version gains the usual Vehicle Mode silver on the ladders as well as hazard stickers, but more notable is the extra paint on the robot mode. It gets a lot of extra paint on the torso to bring it in line with the original toy. Unfortunately, it also gains the heartbreak of chrome mismatch, with the magenta chrome juxtaposed with the deep purple unchromed parts. The real tragedy here is that they could've gone that extra mile and made his thighs silver, bringing his deco fully in line with the toy and preventing most of the mismatch. 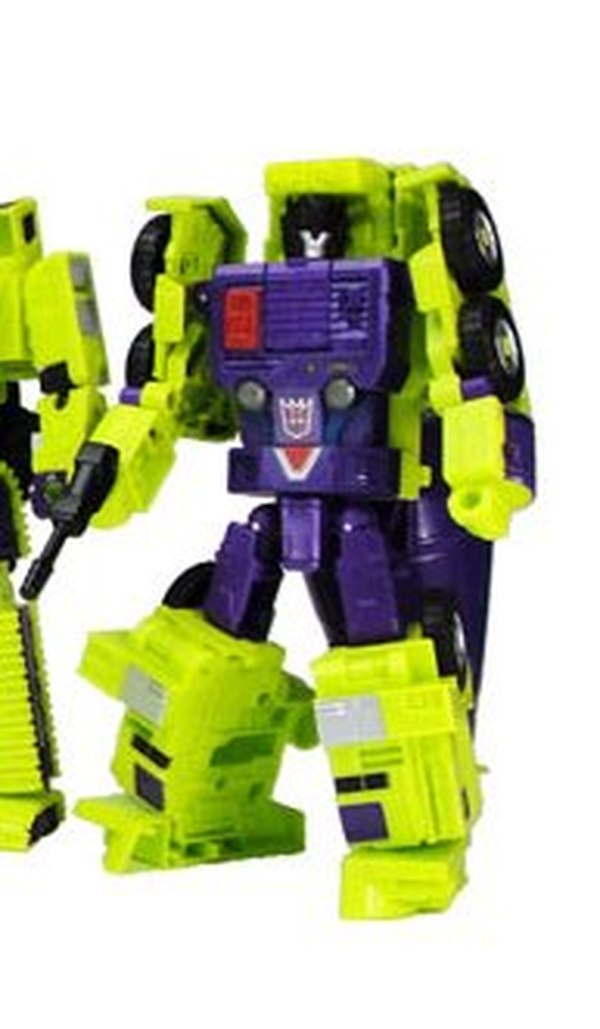 TakaraTomy's Unite Warriors Mixmaster does away with silver for the most part, just as the G1 character model did. Even the gas tanks on Mixmaster's arms are now purple! But otherwise, outside of gaining a gun, UW04 Mixmaster has no physical changes - making that Perfect Effect cab cap equally usable and arguably needed for either country's Devastator. 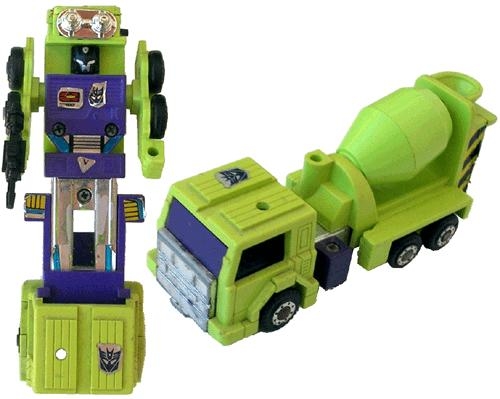 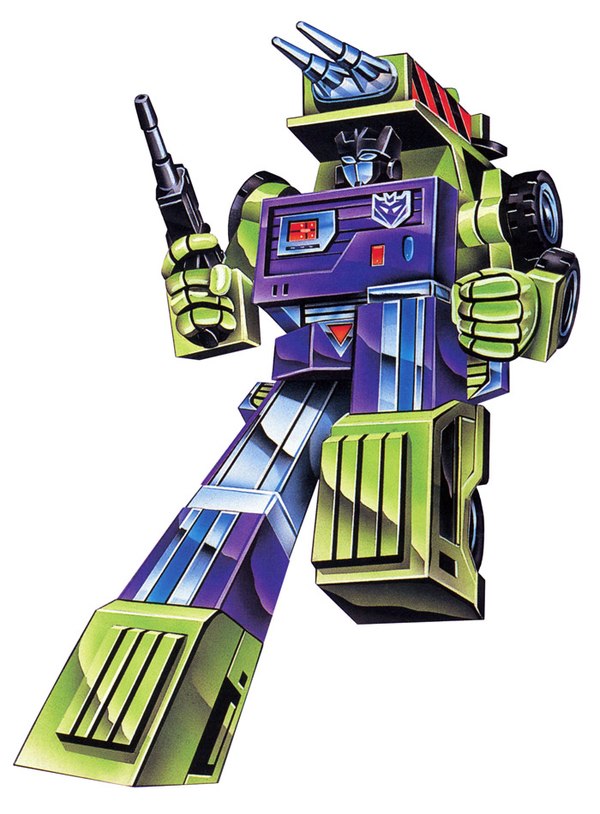