by BaCon on June 28, 2018
We have seen many many attempts at a real-life transformers. From giant robots, to the tiny nano-bots, and many radio-controlled hacks in-between. However, none of them has left the ground as a functional robot, functional vehicle, or were literally able to fly.

That's all changed with the JSK Lab "DRAGON: Transformable Mulilinked Ariel Robot" invented by scientists at the University of Tokyo, Japan. Extra cool, considering Japan is also where the Transformers toys were made by Takara Tomy. Even cooler, the DRAGON is actually a team of four Dual-Rotor robots that combine.

What's quite magical, is the DRAGON does more than fly. It can manipulate the array of dual-rotor robots to change shape. Albeit basic, the DRAGON really can Transform from a string into a square formation while hovering in mid-air.


DRAGON is made of a series of linked modules, each of which consists of a pair of ducted fan thrusters that can be actuated in roll and pitch to vector thrust in just about any direction you need. The modules are connected to one another with a powered hinged joint, and the whole robot is driven by an Intel Euclid and powered by a battery pack (providing 3 minutes of flight time, which is honestly more than I would have thought), mounted along the robot’s spine. This particular prototype is made up of four modules, allowing it to behave sort of like a quadrotor, even though I suppose technically it’s an octorotor.
Read the full article at IEEE about the DRAGON the flying robot for more details at spectrum.ieee.org
Image (click to enlarge) 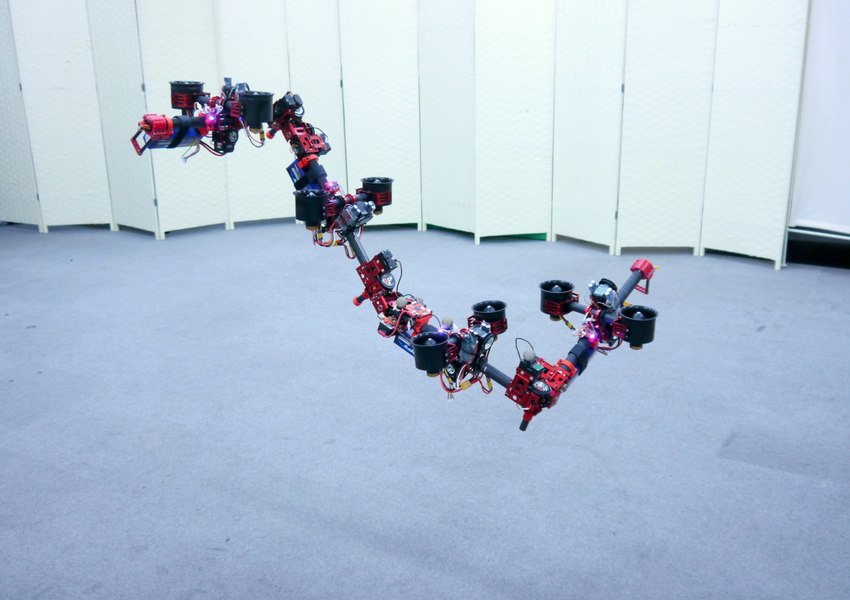