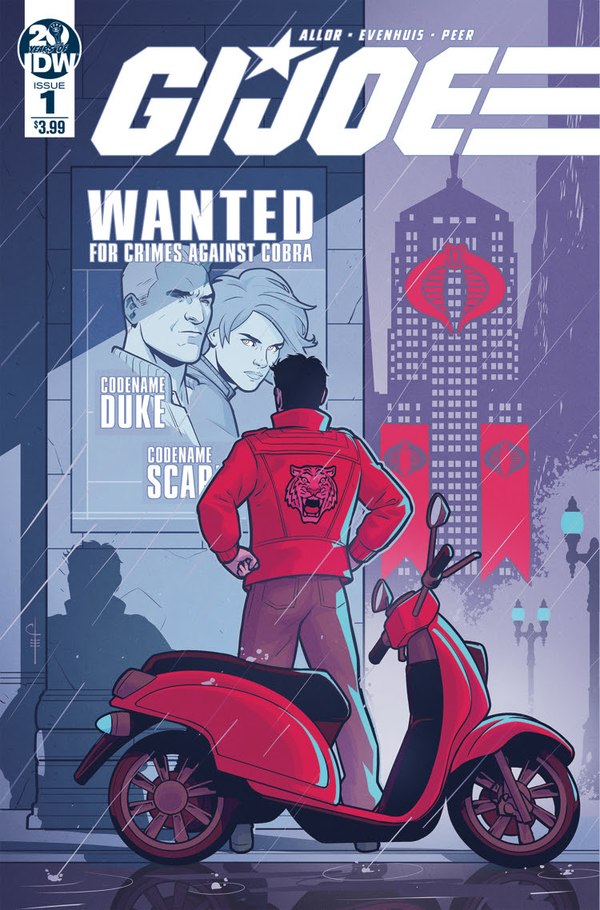 The new G.I. JOE series, debuting in September 2019, introduces the concept of civilians being recruited to face an overwhelming Cobra takeover -- a premise proposed by Hasbro itself.

Could you share some insight into the genesis of that idea?

We’ve been wanting to bring a new G.I. JOE story to life for quite some time now, but I was looking for a fresh angle that would honor the origins and essence of the brand, while at the same time providing a story that would be relevant to a new generation of readers.

For those of us who grew up during the Cold War, the story of G.I. JOE vs Cobra served as a proxy for the world we lived in, which could certainly be scary at times.

A story about a group of heroes who fought for freedom against what was in many ways a familiar foe rang true for us, and I believe in some ways allowed us to channel the anxiety of living in those times through a grand adventure story.

Today we are faced with new anxieties, in an asymmetrical world where nothing seems to be as simple as a different flag and a far-away nation.

A different world calls for a different story, but still one in which good will ultimately triumph over evil.

As I considered a basis for a new G.I. JOE story, I became aware of an organization during World War 2 that sparked my interest and curiosity: Great Britain’s Special Operations Executive (SOE).

This unique organization recruited everyday civilians and turned them into spies, saboteurs and, when required, assassins.

Dropped behind enemy lines in Nazi-occupied Europe, they had to rely on their wits, their training, and their courage to survive and succeed.

Also unique for the time, both men and women served in the SOE. Their actions, though still largely unknown by many people, are credited with shortening the war by as much as 6 – 9 months.

This then became the inspiration for a new G.I. JOE story.

A story about everyday people thrust into extraordinary circumstances, where hope, and the indomitability of the human spirit can overcome the most powerful and well-resourced enemy. 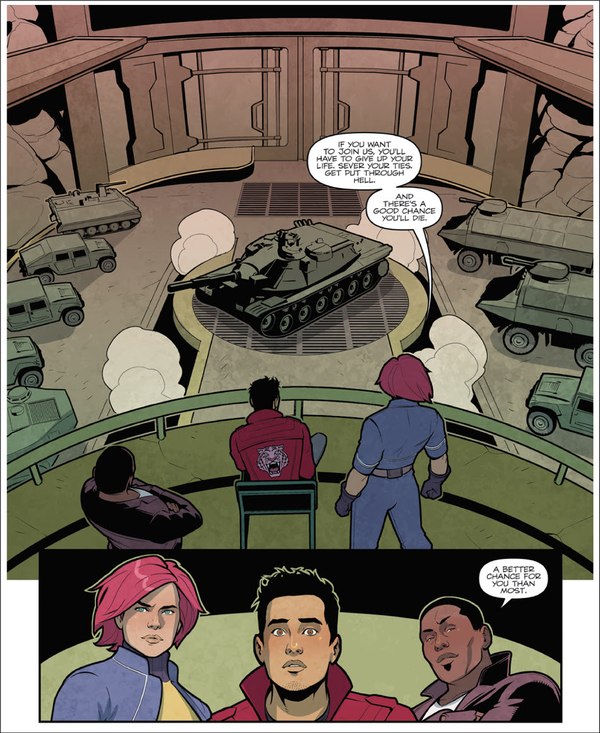 What are you enjoying about how the project has taken shape?

I’m really excited by what I’ve read and seen so far. When I proposed the new direction to IDW, I wasn’t 100% sure if they’d be on board.

Of course, I could have forced the issue, but I don’t like to work that way, because I find the more you dictate, the more creative opportunities you actually miss.

So I was really glad when IDW saw the value to my pitch, and even more so when I saw what Bobby, Paul, and Chris have achieved.

They’ve taken it to a whole new level, building in tension, action, and even humor on an amazing scale.

Let's take a step back to talk a bit about your own history with the G.I. JOE brand.

We know you personally to be a big fan of the franchise. What appeals to you about the "daring, highly trained, special mission force", and do you have a favorite moment/memory that you can share?

The thing about G.I. JOE that I’ve always loved is that literally anyone can be a member of the team. You don’t have to have been exposed to radiation, or mutated, or come from another planet. G.I. JOE is certainly made up of super heroes & super villains, but their powers are based on their intelligence, their courage and ingenuity, and their mental and physical abilities. You can actually train yourself to be a member of this team without any artificial augmentation. It’s inspiring.

As for a favorite moment? It has to be the day in 1982 when I received the first Cobra Commander figure in the mail after saving up my Flag Points.

The G.I. JOE: A REAL AMERICAN HERO comic, originating at Marvel and continued here at IDW, maintains a steadfast following after hundreds of issues of continuity (the ongoing series, plus spin-off series, miniseries, and specials).

What are your thoughts on the fandom that keeps coming back for more?

Well, we wouldn’t be where we are today if it weren’t for the fans of the original G.I. JOE: A REAL AMERICAN HERO comics. Their passion, dedication, and loyalty to G.I. JOE is both inspiring and at times daunting.

And for them particularly I want to make one thing very clear: as long as Larry Hama wants to keep telling G.I. JOE stories, he is more than welcome to as far as I’m concerned.

This new G.I. JOE story isn’t meant to replace REAL AMERICAN HERO; it’s meant to live alongside it as a separate continuity. So, if you are a huge fan of Larry’s run on RAH, you have nothing to worry about: as long as Larry keeps writing you can keep reading.

At the same time, I do ask our fans to recognize that we have a responsibility and an obligation to keep G.I. JOE alive and try new things, in the hopes that we can give a reader today that same experience that our fans had when they first picked up REAL AMERICAN HERO.

And even if it isn’t the JOE story for them, I respectfully ask for their support. After all, I’m hoping people will still be enjoying G.I. JOE many generations from now. 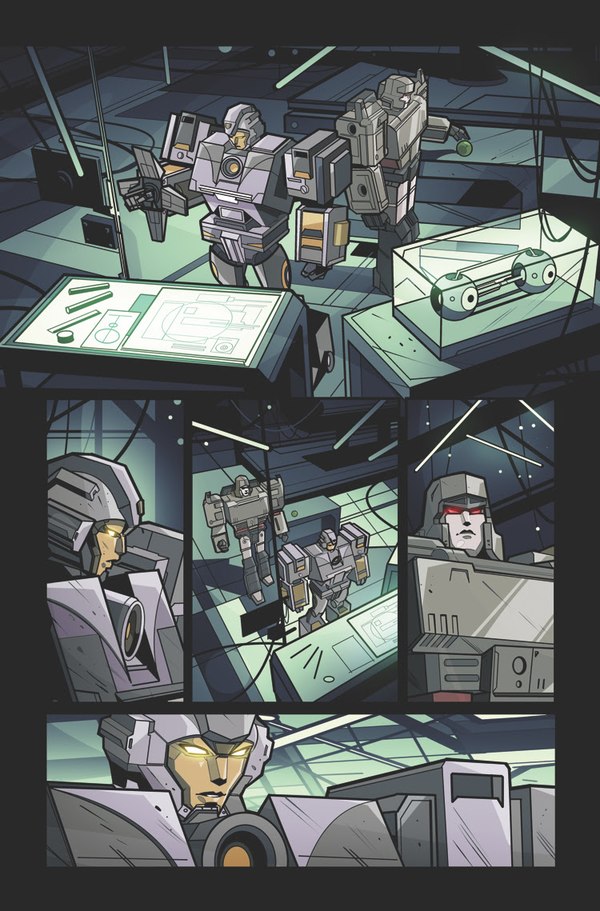 Hasbro has welcomed various incarnations of G.I. JOE toys, cartoons, movies, and comics throughout the years. Can you talk about the evolution of this key Hasbro brand, and its continuing appeal in 2019 and beyond?

G.I. JOE has a great origin story, going back to the 1960s. From a historical perspective, it’s certainly one of Hasbro’s most important brands. And the influence it has had is immeasurable. It’s too long to tell here, but there’s a really interesting story about how G.I. JOE led to the creation of TRANSFORMERS. It’s worth looking up.

What is particularly interesting about G.I. JOE is that it has evolved to become different things for different generations.

From the original Action Figure, to Adventure Team, to REAL AMERICAN HERO, and now today, Hasbro has allowed G.I. JOE to reflect the times we live through, and that keeps the brand both exciting and relevant.

Switching directions, IDW's TRANSFORMERS comics line entered a bold new era in 2019 -- a story set in Cybertron's halcyon days, with a smaller cast of characters setting the stage for global upheaval. In your mind, what sets this incarnation apart from other TRANSFORMERS media?

We’ve told stories about Cybertron before the war before, but usually as an aside or flashback. This is by far the most time we’ve spent in pre-war Cybertron, and I think that tone really sets this book apart.

Also, the smaller cast allows us to dig more deeply into personalities, motivations, and aspirations.

And while I know the TRANSFORMERS are not human, it’s my goal for this book to highlight their humanity, which I believe is universal in all sentient beings, even if the word itself sounds species specific.

I want readers to feel empathy for these characters, even some of the Decepticons, especially as events begin to spiral toward their inevitable conclusion.

A second series, TRANSFORMERS: GALAXIES, hits stores in September, with short story arcs that not only spotlight fan-favorite characters that exist on the periphery of the core storyline (like the Constructicons), but fill in the gaps of Cybertron's origin and societal structure.

Are there any mysteries that you personally are eager to see revealed?

There are too many to list. For example, I’m eager to learn more about the relationship between Megatron and Tergamax.

There’s something there that I find particularly intriguing. And I’m really interested in the various species that have chosen to settle on Cybertron.

There has to be an interesting backstory to an organic species deciding to move to a metal planet, and the fact that most of the Cybertronians seem to accept their presence and for the most part welcome them.