Just How Tall Are The Combiner Wars Combiners, Anyway?

by ExVee on December 6, 2014
Despite quite a bit of in-hand photography of individual toys and finally an assembled combiner, there's been very little to demonstrate the final height of the super robots. To date the only time we've seen any of these toys alongside an already released figure has been when they're displayed with upcoming Legends recolors. But that's enough for us to work out an answer. So until someone takes a ruler to Superion and gives us concrete numbers, keep reading to see what we've learned!

Thanks to the new photos from the Singapore unveiling of Combiner Wars, we have something to base a measurement on. One photo shows Superion and Ultra Prime on a table with Legends Thundercracker - naturally a recolor of Legends Starscream, a toy many people currently possess. From its feet to the top edge of the wings is 9 centimeters, or just a hair over 3.5 inches. We have to do a little estimation since Superion is a little bit behind Thundercracker, we can't simply stack Thundercrackers until we reach Superion's head. We have to scale a little, so there's going to be a margin of error, but this is only a basic estimation of height so that's okay for now. So as we take our adjusted Thundercracker and place it one after another until it matches the top of Superion's head, we find that Superion is about three Thundercrackers tall. That's 27cm, or 10.6 inches. And that is within a quarter of an inch of the head-height of Fall of Cybertron Bruticus, a result close enough that I'm comfortable concluding Combiner Wars combiners match the height of Bruticus, and our measure coming up just slightly short is probably due to not scaling down our meter quite enough to match the perspective in the photo.

But how is a combiner made of a Voyager torso and four Deluxes the same height as one with a Deluxe center? Because Fall of Cybertron Onslaught lost no individual height in going from robot to combiner mode. If anything the figure gains just a little in the switch. Meanwhile Silverbolt and Optimus aren't able to use their full robot height as part of the combined form. They compact down, but they also fill out some mass which Onslaught was very much missing. The basic height of the torso modes can be demonstrated well in this very same photo, where arm mode Drag Strip represents more or less the full height of a Deluxe figure, and equals the height of the torso component of either combiner.

So in summary, the new combiners are between 10.5 and 11 inches tall. They're the same height as Fall of Cybertron Bruticus despite a larger toy making up the torso because they're made to transform in to torsos in a different way. But they will definitely have a greater central body mass than Bruticus did!
Image (click to enlarge) 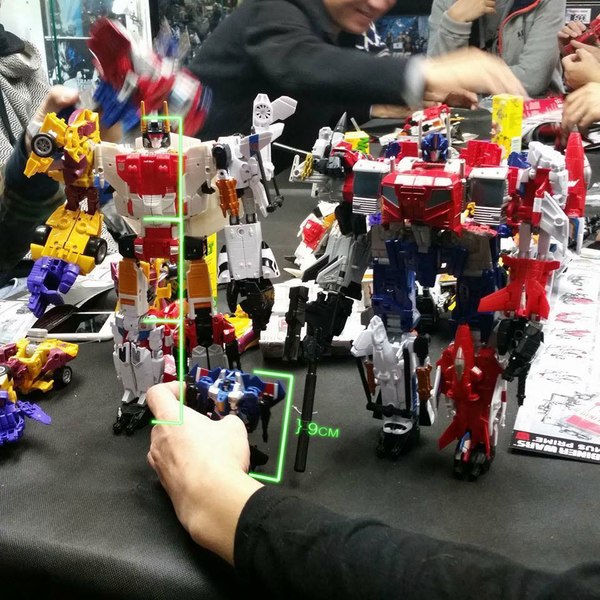