The Transformers Generations panel took place this evening at New York Comic Con. Among the topics covered were the Prime Wars trilogy in the comics, the animated series being produced by Machinima, and of course the toy reveals featuring a thing or two we hadn;t gotten to see at the media event Wednesday night. Thanks to Radio Free Cybertron's diecast, Anthony from TFU.ino and Ben Yee from BWTF we got a lot of info out of the panel, so click through to read the minute-by-minute!

Talking about wanting to make good entertaining media for everyone, acknowledging all the RID fans before moving to talking about Generations.

Starting off with Prime Wars trilogy.


They want to make a robust, and immersive universe. Want to give the fan a deep and wide variety of experiences.

Machinima producer introducing the concept by saying that he thinks the US audience is ready for a kind of animated story they're not getting right now.

"There's stakes, there's consequences, and nobody is safe."

Machinima producer: "We want to be faithful to ourselves as original G1 fans, but also recognize that there are new fans as well."

John Warden talking about a "corporate retreat" to get everyone on the same page with the Transformers and their various expressions and backgrounds.

Machinima producer: "We love the comics." "Our story is going to be original, but if you're a fan of the comics, you'll find a lot of inspiration and adaptation from there."

Pursuing a "Japanese production model", which apparently means the whole production staff is used to working on adult projects.

One rule George wants enforced: every frame will have one combiner punching another combiner!

Had some issues getting the Japanese team members to understand the phrase "badass".

The return of Sentinel Prime.

John Barber, James Roberts, and Mairghread Scott will all three be working together to write Titans Return.

Talking about how far back Combiners were being set up, and that Titans return has the same kind of early seeds planted already.

Livio Ramondelli will be working on at least the opening issue of Titans Return. John Barber loves working with him.

Laying down the blueprint for the trilogy now, to help make the universe feel cohesive across the various media and toy ends.

Coordinating toy waves as being part of the experience of their story telling.

They're still referring to The Transformers as "Former Robots in Disguise".

Talking about the main titles hitting issue 50 and how it's been a stable creative team and how excited they are about plans they have going forward from here.

"Not a lot of love for Sentinel." "What kind of person is he?"

Not a nice person!

Silhouettes of Galvatron, Blaster, and Hardhead.

Talks about "even bigger Transformers" having compatibility.

Nightbeat being used to explain the basic construction of the Titan Masters and what their vehicles do.

Terri-Bull, Crashbash, Loudmouth. John Warden is making "subtle" puns with the old names whenever he can.

Rewind, pointing out the "wallpaper" on the "screen" looking like a micro cassette.

Warden pointing out "Cybertronian feel" of the toy styling.

Recognizes from fan interaction how "underserved" some of the 86 and later toys are.

Vague teaser of two other silhouetted headshots, not showing.

Galvatron, talking about Nucleon looking like Megatron as a "hidden easter egg".

Third mode is "tank", which they;re being very unsubtle about being Astrotrain later.

Titan Masters in the story can bring unusual powers.

Explaining about bringing back base modes, and how they'll connect together to make a big world.

Presentation is wrapping up. Plugging Hasbro Pulse, talking about how everything will come together in the fiction like the comics and the animation "not for kids".

-Like to observe anniversaries, but no promises. Going to "honor the history" over the next 18 months.

Why change how Headmasters work?

Will faction splits be more even?

-They love Sideswipe too, and he'll have a big role in issues 46-49 of the comic.

Question about how accessible the new animation will be to non-comics fans.

-They want it to be accessible to everyone.

-Calling two per year typical. They're thinking about the line, but haven;t made or changed any plans yet. 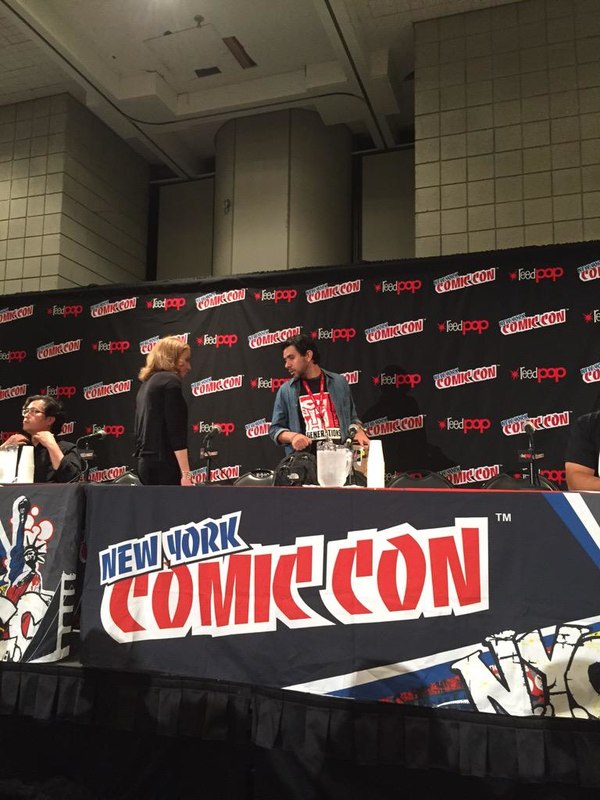 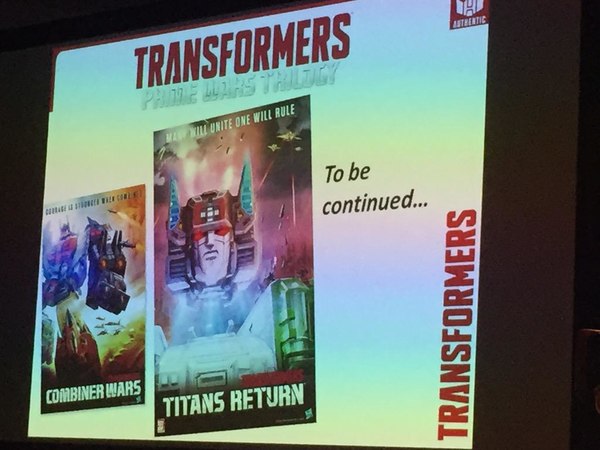 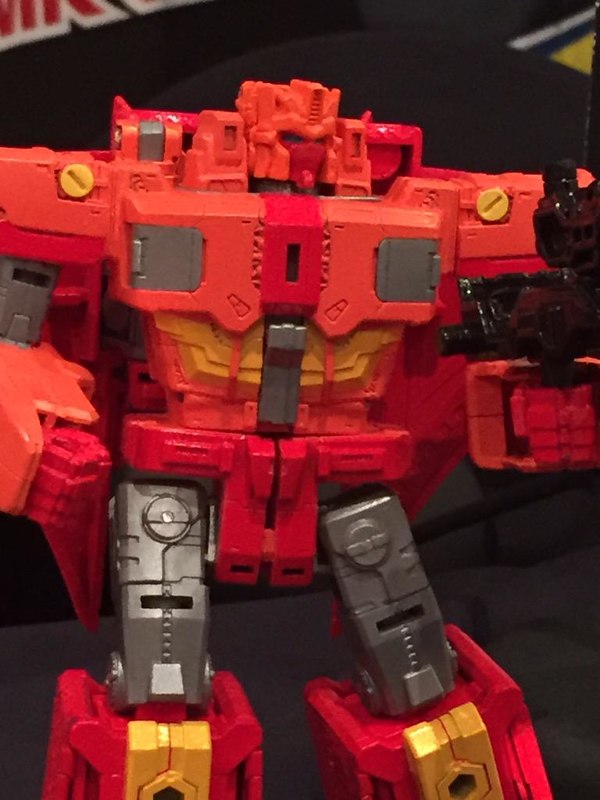 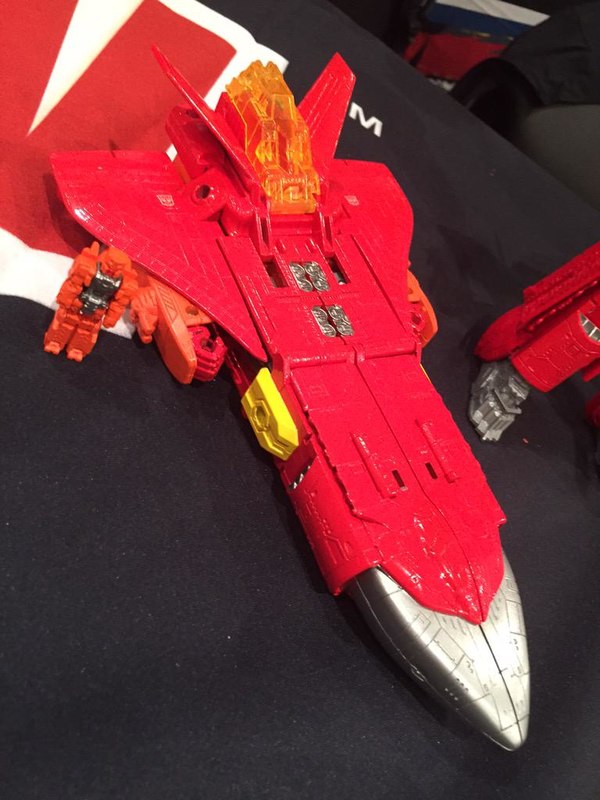 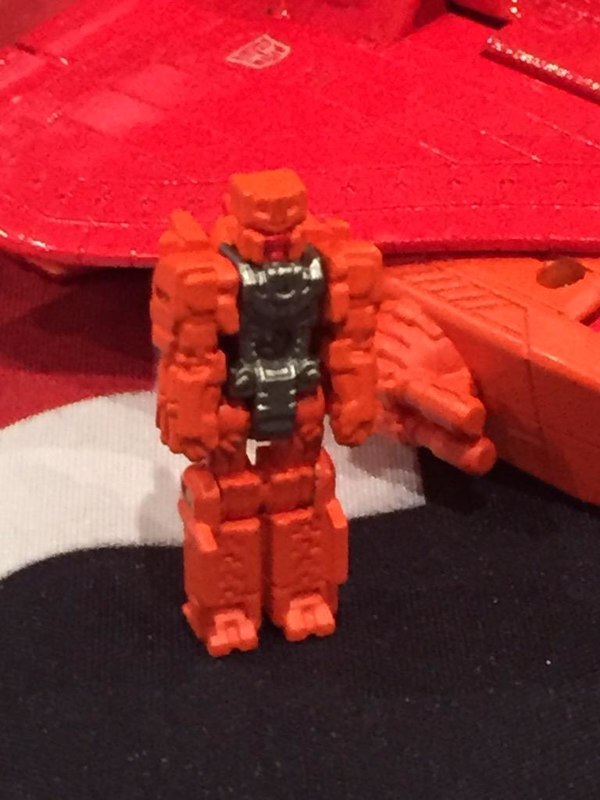 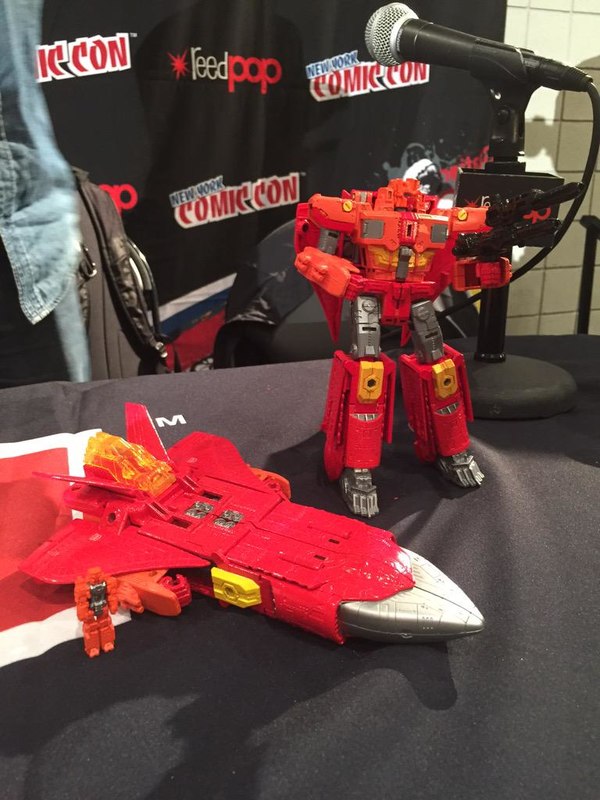 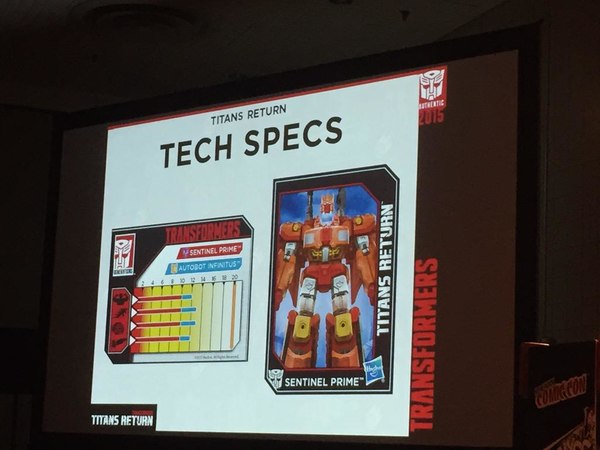 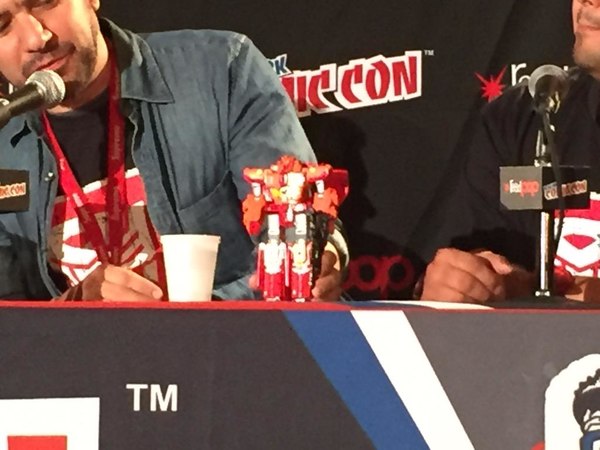 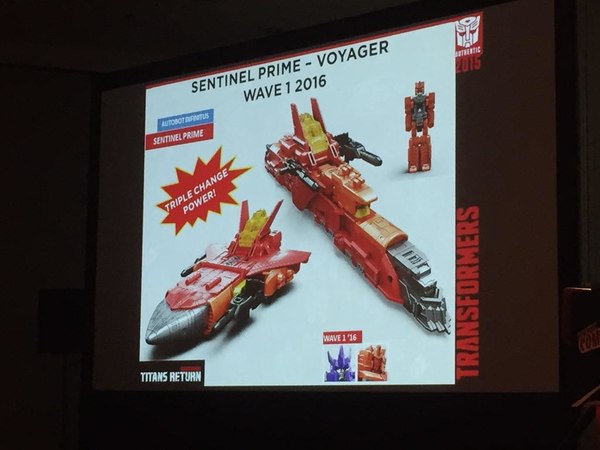 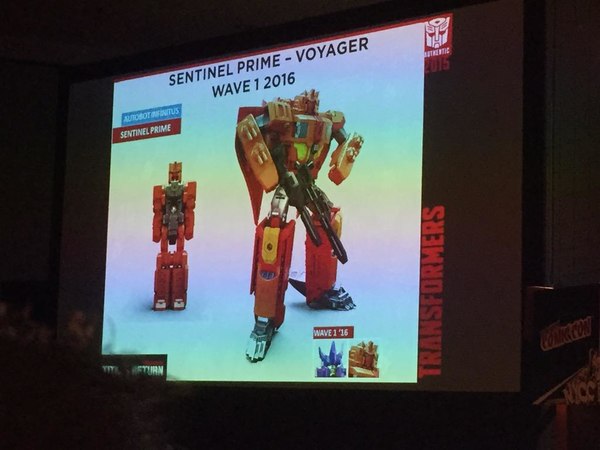 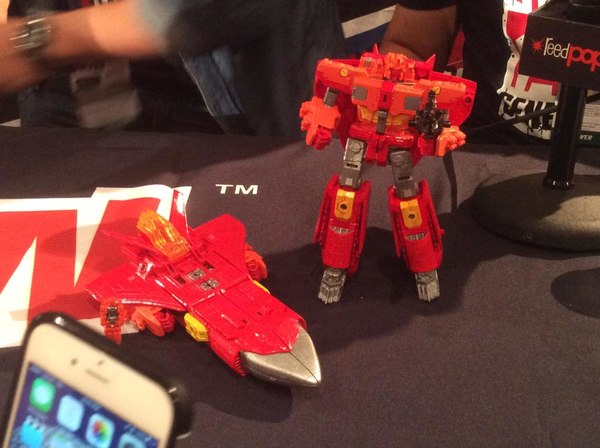 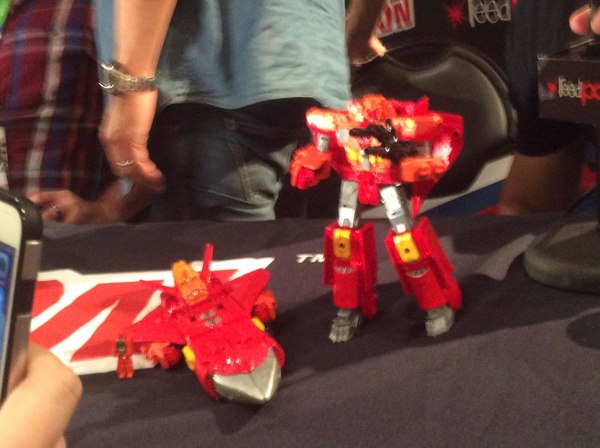 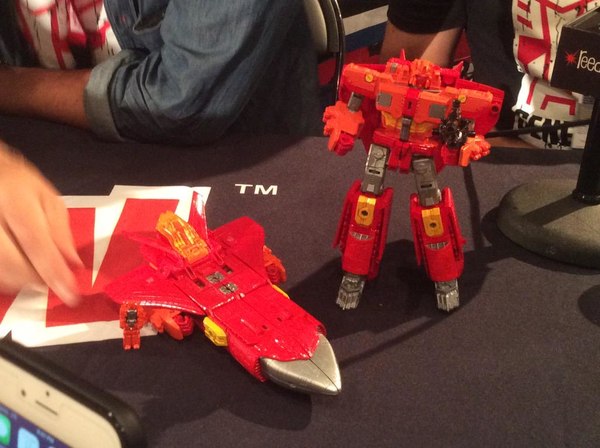 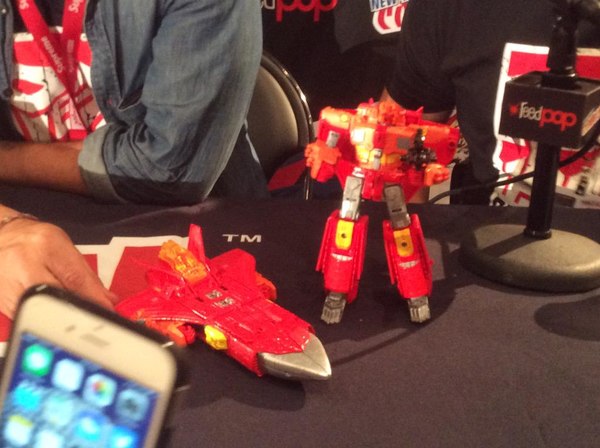 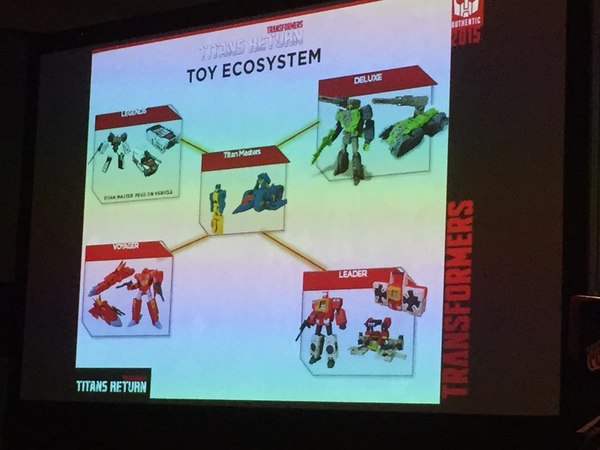 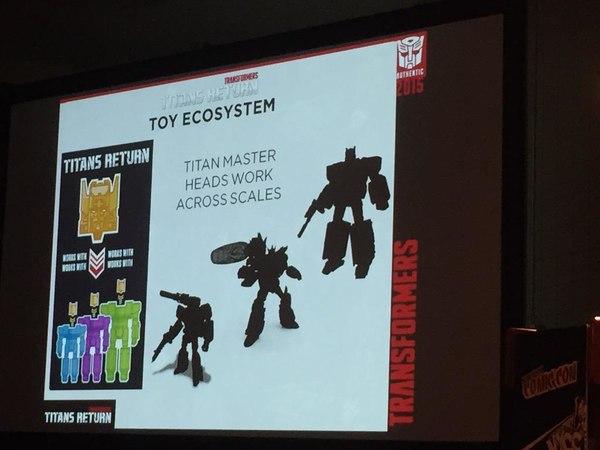