The Hollywood Reporter has posted an image and description of the new model of Optimus Prime Voice Changer Helmet being made for Transformers: The Last Knight! Sporting 21 sounds and phrases, the helmet is due in the spring but, THR notes, is going to be shown off at the Hasbro stream we just announced a few minutes ago. Looks like it may have a TF5 focus! Keep reading for more details.

Transformers fans who have spent years wishing that they could roll out just like Autobot leader Optimus Prime get some good news this New York Comic Con, with Hasbro unveiling an Optimus Prime Voice Changer Helmet at the event to tie-in with next year's Transformers: The Last Knight release.

The helmet, which features 21 button-activated sounds and phrases from Transformers lore, will not be available until Spring 2017 but fans can see it in action — and more importantly, hear it in action as part of the #NYCCLive livestream at 1:15 p.m. ET Thursday.

The Voice Changer Helmet — the most sophisticated yet released by Hasbro — is the first announced collectible for next year's The Last Knight movie, which is currently in production for a June 23, 2017 release. Perhaps one of its phrases might explain what Optimus is doing hanging out with dragons in early promotional images for the movie… 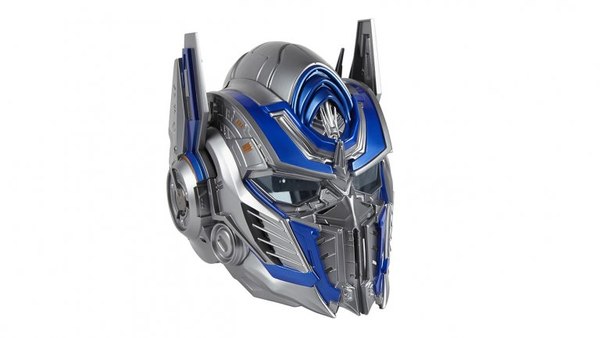