For the first movie, it didn't seem like Jazz got much love. Some people weren't sure what was worse, the pun heavy and undignified death at the hands of Megatron or the poor excuse of a Deluxe figure that came out for him. As part of the Human Alliance subline, it looks like Hasbro is offering penance for their former transgressions.

Against the massed forces of the Decepticons, it will take every bit of power and ingenuity Autobot Jazz and Captain Lennox have to win. Though the two soldiers have only just met, they are both experienced fighters, used to working in synch with others. They easily team up to focus all their fire on a single, huge Decepticon, and bring him crashing down.. 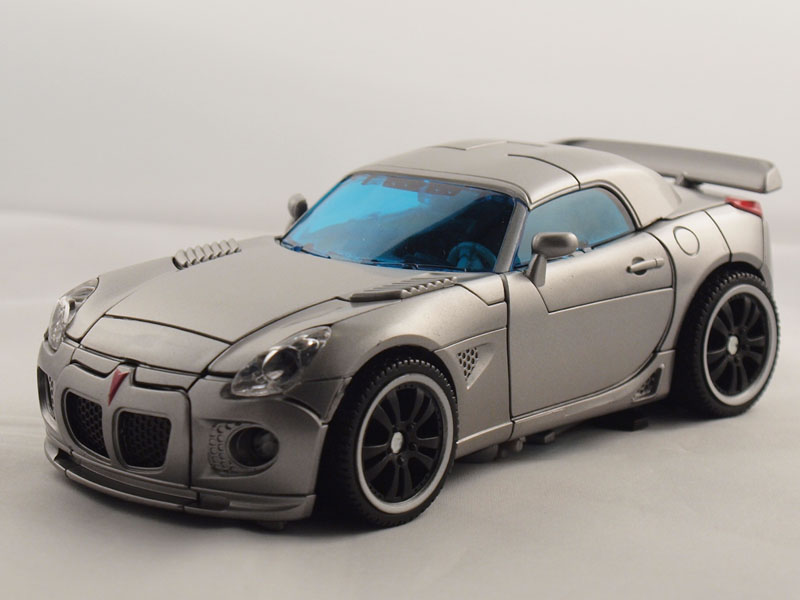 Jazz' now defunct Pontiac Solstice alt mode get alot of noticeable updates for the HA treatment. The grill and foglights feature vehicle correct honeycomb designs and the headlights are now clear. Hood and fender vents are now detailed, as is the rear brake intake behind the doors. All the windows are now done in translucent blue. 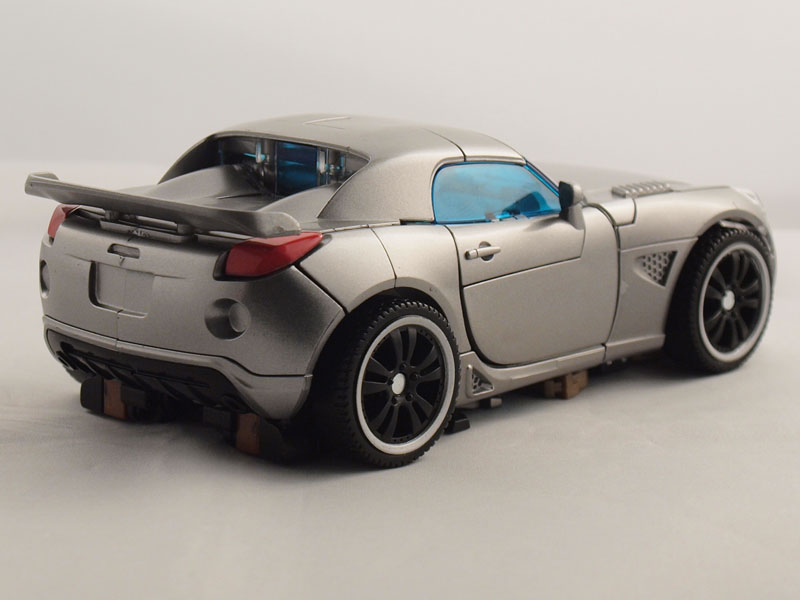 The interior isn't as detailed as in past HA figures. For one, there is no full seat for the humans. All you get is a backrest. Also, since the doors double as the forearms, you get no door panels. There is a sparsely detailed instrument panel, however. As far as playability, ground clearance is almost nonexistent. Therefore, make sure if you have to roll this figure along that it's done on a smooth, soft surface. 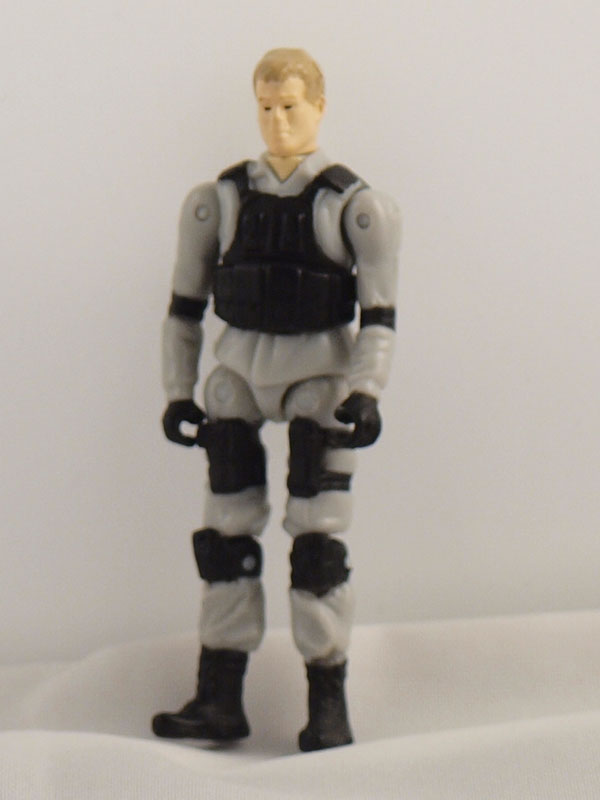 "OMG! Did you just see it in Star magazine? Josh Duhamel just went bleach blonde! I know, like gag me!" If one didn't know better, Capt Lennox could double as Duke in GI Joe with that bright blonde hairdo.

Open the doors. Open the hood and pull it over the windshield so it's resting on the roof. Carefully remove the decklid from the rear and pull it onto the roof as well. On the belly next to the door hinges you will find a bar. Flip it forward. Pull on the door sills to remove them from the front end. In a series of bends, pull on the rear wheels so that you fully extend the legs. Once done right the legs should extend past the rear end. Fold up the sills against his calves. Twist each half of the rear bumper so that the round inset is on the bottom. Rotate the bumpers out so they sit on the sides of his thighs.

Pull on each front fender so they come out and back a little. Flip down the front end 90 degrees, then spin it 180 degrees so it's upside-down. Lift up on a panel just behind his hood. Now, push down on the front end until it locks in place. Flip out Jazz's head and rotate 180 degrees. Rotate the shoulders so the doors face down. Flip out the hands that are imbedded in each door panel and twist the fingers apart. Fold the door glass against the inside of the forearms. Note that they will not fold flush. Rotate the forearms 180 degrees and lay them to rest against his body. For the final touch, pull out the Pontiac grille and rotate it 180 degrees. 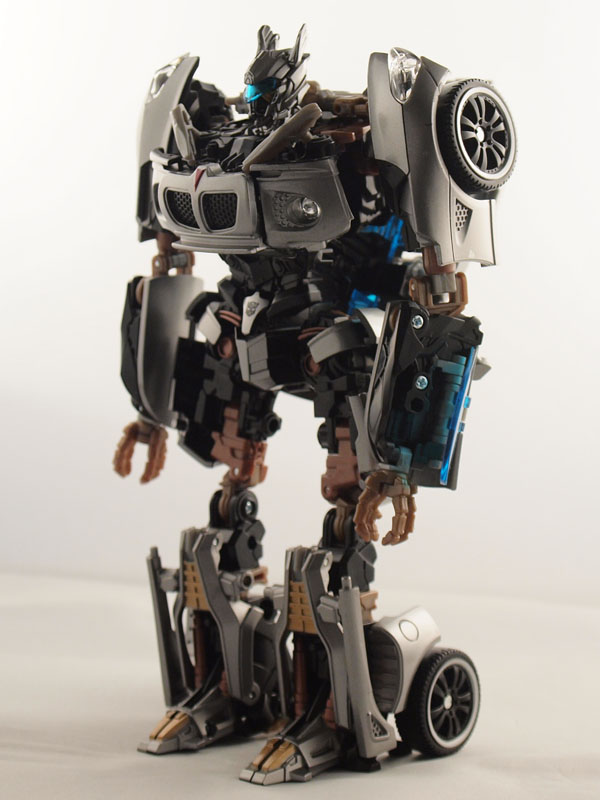 By now, most people know that the HA line gives the robot modes a much needed facelift. In the case of Jazz, it gives the robot mode vindication. No more short and stumpy Jazz here, this gives Jazz some class... and some Jazz hands. He also has a deployable visor via a switch behind his head. Personally, he looks much better with his blue translucent visor down.. 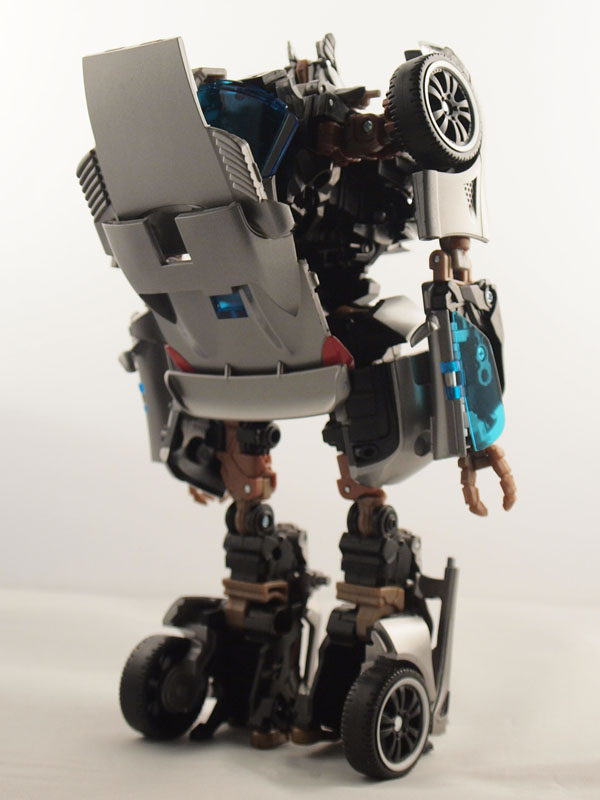 It just wouldn't be a Human Alliance figure without Capt Lennox having some interaction with Jazz. Following are his three official placements: 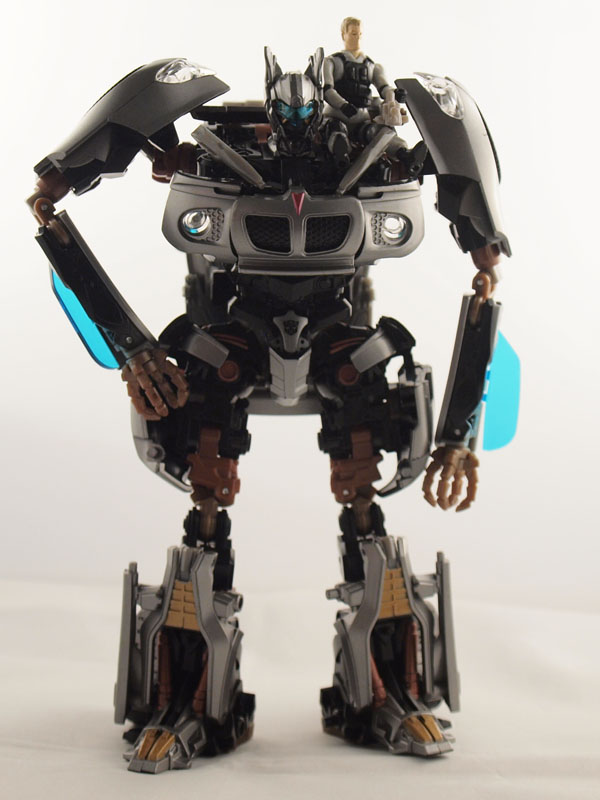 Flip the bronze panel up next to his left shoulder. Peg Lennox's back to the panel then flip up the panel behind his head. Flip up the cannon then fold it down so that Lennox can fire the bad boy. 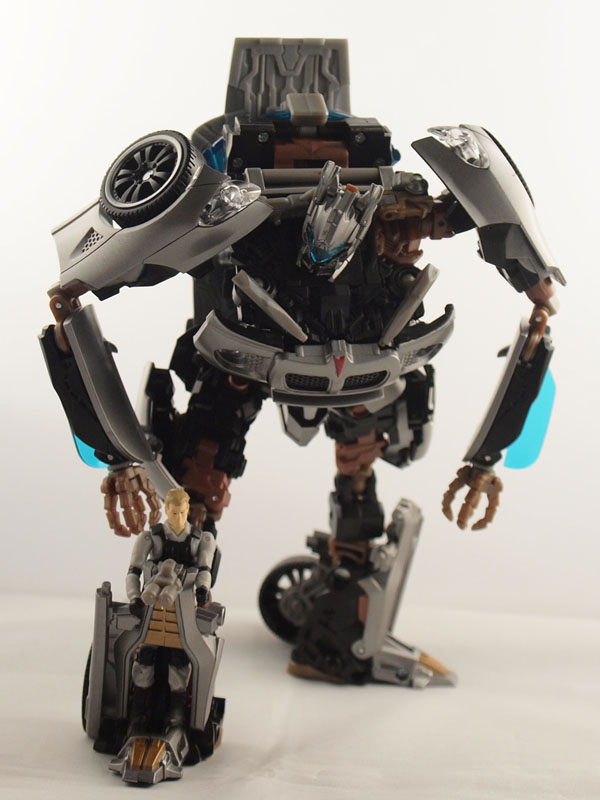 The goofiest placement yet is having Lennox sit on his foot. Fold down either of Jazz's shins, slide Lennox's legs through the hold in the shinplate, then flip up a mini cannon hidden in the plate. Not sure about you, but I'm gonna file this under the "What were they thinking?" department. 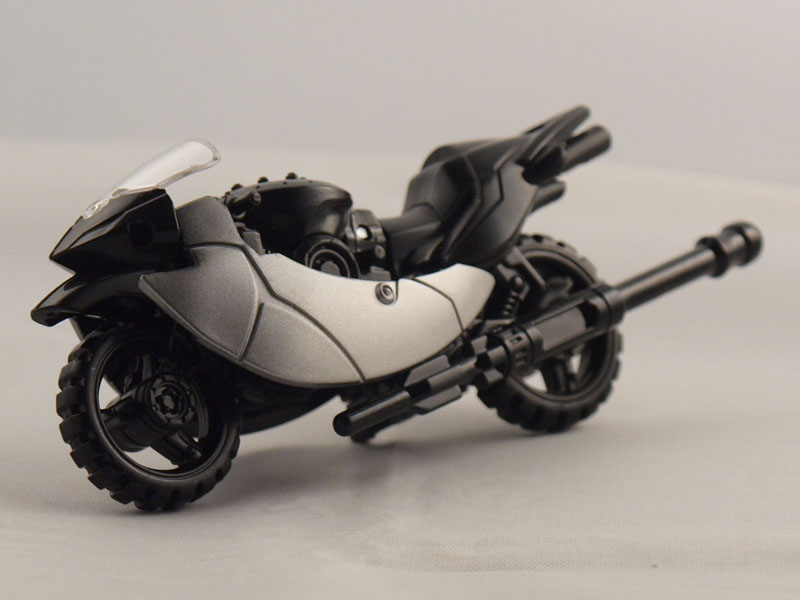 The best gimmick perhaps lies with the motorbike that comes packed with Jazz. No, it's not Elita-1 or Chromia. It's just an innocent looking silver and black motorbike... right? Wrong! Flip the fuselage on both sides up, rotate out the bar on the right side of the bike, fold the rear wheel up, then down and around to wrap the rear wheel next to the front wheel. Flip out the peg that's on the bar. Fold either of Jazz's hands back into the door panel and affix the peg on the converted motorbike onto the panel. 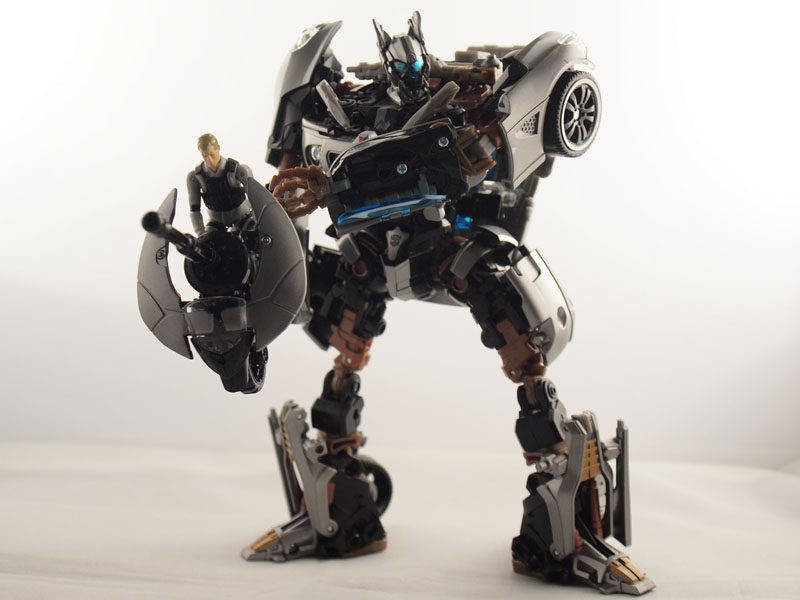 Voila! Instant arm blaster! As an extra bonus, it also includes a launchable missile. Lennox can also sit on the bike, but he doesn't really peg on so he rides somewhat sloppy in the saddle.


Legs are somewhat restricted due to the joint setup, which hasn't been like HA figures before. The arms, however, are very articulated.

A much improved alt mode with many added details.
Robot Mode:

Worlds better than the Deluxe mold, but slightly lacking for a Human Alliance figure
Overall:

Finally, a Jazz that can be proudly displayed, even if he's not one of the better HA figures in terms of gimmickry.