A note on format.

A full synopsis will follow the non spoiler review. Those who do not wish to read spoilers from this issue should stop at the end of the review. 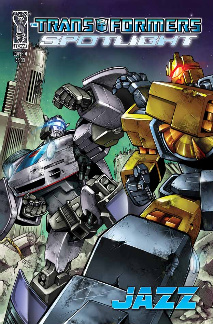 Spotlight: Jazz is a must for all you Jazz fans out there. It delivers a solid story taking place part in the distant past and part during All Hail Megatron’s Autobot exile.

Expect a great fight between Jazz, Tracks and the Predacons, intertwined with a story that dovetails nicely with last weeks All Hail Megatron #9. It’s great to see this kind of exploration of the Autobot psyche and motivation. Even better is to see characterization of a top shelf character like Jazz combined with an action packed story like this. This is the Transformers after all.

The art is solid and consistent, and best of all flows beautifully throughout the issues several combat sequences. It was fun to see Jazz in his pre-earth alt mode. 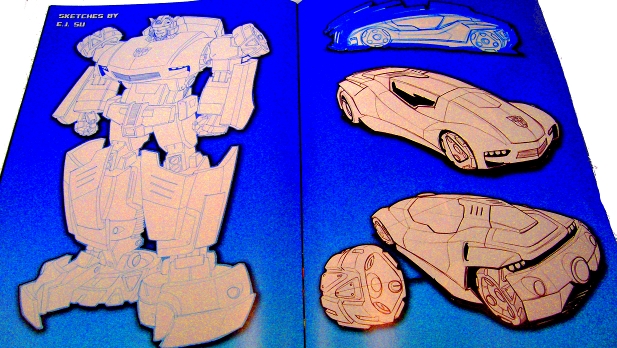 Jazz fans should have this issue in their collection. Any Comic or G1 fans who aren’t doing the month to month thing can rest assured that this will be a worthy section of the Spotlight TBP it appears in.

Spotlight: Jazz opens on Cybertron during the events of All Hail Megatron. Those following that series will know that the Autobots have had their skidplates handed to them and are trapped on their dead home world surrounded by cannibalistic mutant Insecticons. Needless to say moral is low.

Attempting to calm tempers, Tracks of all people decides to tell the inspiring story of his first mission. Tracks was the sole survivor of an attack his unit. As he regained consciousness a lone rescuer appeared. Due to damage to his optics, Tracks was unable to identify his rescuer, Jazz.

Just then, Jazz’s ship and squad of red-shirts is blown out of the sky by the Predacons, who as always look great in their pre-animal forms. (Hasbro, toys please?) Jazz and Tracks limp away with the Preds on their trail.

Jazz manages a brief speech about Autobot trust, even while rigging his “auxiliary energon reservoir” (conveniently shaped like a grenade) to explode. Despite the words auxiliary and reservoir this puts Jazz in eminent danger of stasis lock.

The Predacons arrive and Jazz persuades Tracks to distract them, which he does in customary Tracks fashion, missing them with blaster fire and uttering one sentence that ticks them off so much they start dulling the blades the plan to cut him up with.

Enter Ninja Jazz… oh wait that’s animated… well it still applies! Jazz sneaks up on the Preds, cracks Tantrum in his silicon jaw, breaks his arm and spills his linkage with his own sword! The Preds turn just in time to see Jazz has converted and its time for Predacon Bowling. 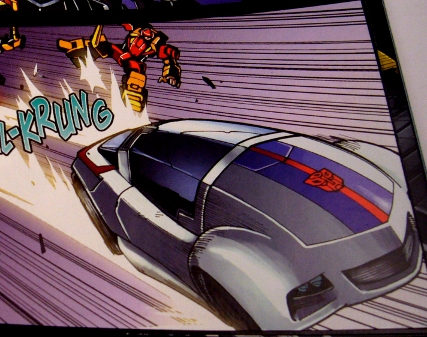 After introducing the Predacons to the pavement, Jazz picks up the damaged Tracks who sets the reservoir grenade down. Rampage and Headstrong find it, as fate would have it, they are the one’s it puts into stasis lock.

Now only Razorclaw and Divebomb are stalking the Autobots. Jazz gives another stirring row of a speech, which we see Tracks relaying to his fellow Autobots in the future, who sit around him like kids in front of the fire. Where’s a robo-rocking chair when you need one?

After this stirring oration Jazz goes out to face the remaining Decepticons. Fortunately for him Track’s ball bearings drop and he transforms and via his bumper introduces Divebomb into a wall, at mach 2. 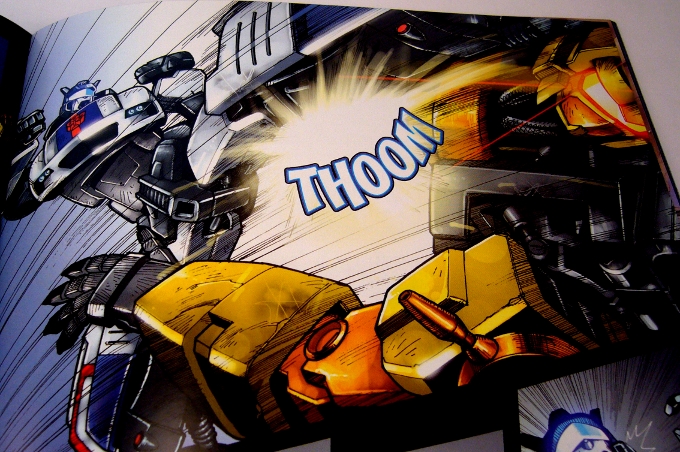 So now it’s time for the Jazz/Razorclaw smack down. It does not disappoint. In the end, Jazz’s lack of internal grenade… I mean “auxiliary energon reservoir”, gets the better of him, Razorclaw wastes no time taking advantage.

Before the final blow can be struck Ironhide pulls up in a ship and they blast the remaining Predacon right out of the comic. There is an air of unfinished business between Jazz and Razorclaw here.

Tracks never learns the identity of his rescuer. His News from Planet Wobegon however, cheers the troops up on Cybertron enough to fight another day. Prowl tells Jazz that Tracks has told the story. Jazz takes Tracks aside and thanks him.