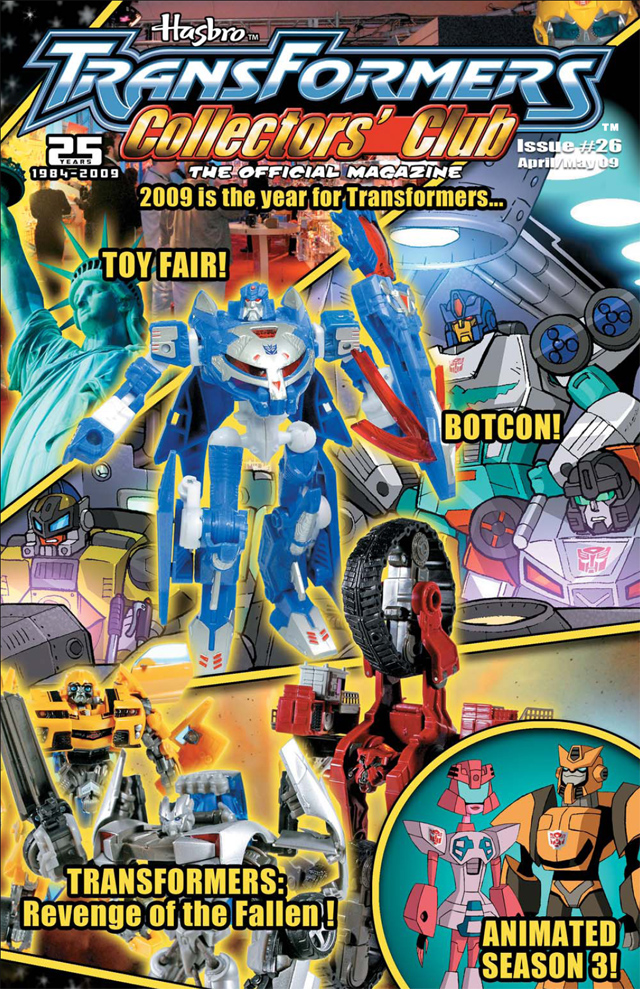 The new issue of The Transformers Collectors Club Official Magazine is reaching homes this week.

The cover of Issue #26 is crowded, just like it’s subject matter. With the movie coming up, Animated offering new surprises every week and Botcon ’09 just around the corner, it’s a busy time to be a Transformer fan.

The cover actually sports some of the issues most spoilerific info. The lower right quadrant contains TWO spankin’ new Transformers: Animated designs. One looks like the Autobot flipside to the one of the designs Derrick Wyatt showed us on his blog last week called, conveniently, Flipsides. The original Flipsides was a double agent, so the two images present an interesting implied spoiler.

The two animated bots on the cover are Hubcap and Rosanna.

The other image looks like a bulkier Cybertronian mode Bumblebee with a new head. Goldbug maybe? Elements of the new head are almost, Headmaster-ish. No official word on who either of these are though.

In more Animated news, the “Bot’s Vs. ‘Cons”, featuring old school tech specs (bust out those red light filters, true believers), section gives us another new Animated character, Reflector. Reflector appears in his traditional three part form, the design and color scheme is uniform purple and green for all three bots. One, presumably Veiwfinder, has a shutter in his chest.

Reflector’s Tech Spec says they/he are/is "A symbiotic coalition of semi-autonomous robots made up of Spectro, Spyglass and their leader, Veiwfinder." It also claims that Reflector can "Create hard-light clones of itself". Hard-light? Isn't that a Red Dwarf reference?

The other Tech Spec is for Highbrow, it alludes to his fate at the hands of Shockwave.

An article by Karl Hartman delves into the craggy waters of un-produced Generation 2 toys. The interesting but short article suggests going to the member section of the club website for further information, however as of this writing the section was not to be found on the site.

A two page spread has some nifty pics of what was on display at Toy Fair. Tragically there’s no new news here. Good pic of the extra large movie Devastator toy. So good in fact it makes you wonder why anyone would take a picture of it.

Profiles this issue are all Shattered Glass. Starting with a very cheery Dirge, a humble Sky Lynx, with a very cool take on his animal modes, and the cutest Ravage you ever saw.

Lest we forget that this is the last issue before Botcon ’09, we get a preview of the story behind this years exclusive set Wings of Honor. It is the beginning of a narrative told by Kup involving the Battle of Beta 9, witch a line of his from the ’86 movie made note of.

This issues comic episode, Reunification Part 2, does its duty, delivering a burst of action and a modicum of story movement. This serial has really been coming together well. Despite the disjointed nature of such short installments, the characterization has remained very consistent. 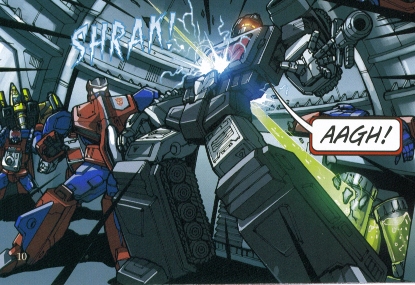 This comic in particular not only showed the team being hardcore but gave us some good character time with them. It helps to make the free club toys more than a repaint collection, but a set of cool meaningful characters. 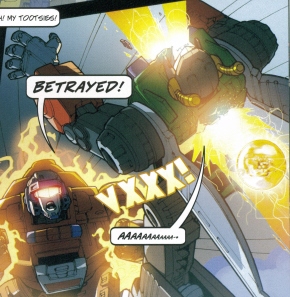 My only real complaint is the same as it is for every month. Too Short!

The last page has a review of Animated, Swindle, and two amusing mini comics.