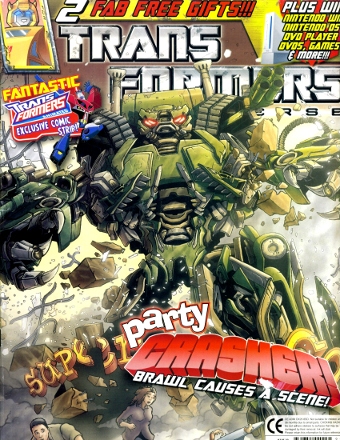 In part one of the next Titan Transformers Movie serial, Revolution, penned by Simon Furman, the Decepticons up the anti, demanding that all Autobots be removed from the Earth in exchange for peace.

With the (drawn not to be Obama) US president under Decepticon control this seeming homage to Megatron’s Master Plan seems to work out just peachy, for Starscream.

In the latest IDW reprints Cybertronian security cracks down in Megatron: Origin, and Starscream seemingly makes his first betrayal. Looks can be deceiving though. In Beast Wars the Ascending, Lio Convoy makes his move to change the future even as Shokaract begins his ascension.

A NEW comic this month, featured with in the “Animated Pull-Out”, the Animated Comics from the now defunct Animated Magazine, continue here with Dive Bomb. Cool to see Furman writing Animated Grimlock, but the focus of this story is the under featured, Swoop. 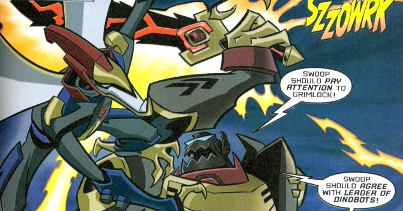 Readers of Maximum Dinobots will recognize the Grimlock/Swoop angst in this story. Plus the story of Decepticon spy Afterburn comes to a head. The comic also makes a seeming reference to Sector 7’s Agent Simmons from the movies.

This issues Character Profile is the divisible Magmatron.

Some new activities in this issue. Trans-Doku, Sodoku with Transformers heads and taking the place of Artobots this issue is a mostly blank page entitled “Artobots Assemble!”. This space has been provided to encourage the young fan artists out there but also encourages readers to have their say about the Transformers Universe.

Plus for those of us hoping to emigrate to Cybertron, Starscream presents us with the official residency exam. Be warned, Decepticon regulations are tight.

Also a pre-made mail in form asks readers for their opinions with a section of the envelope dedicated to a Starscream/Megatron caption contest. Well, we know those two have a lot to say to each other.

Contests this issue include prizes such as a Nintendo Wii with Sonic and the Black Knight, A transformers Room Set, A Phillips DVD Player with the Tales of Despeereaux, Real Madrid for the Nintendo DS, and B-Team Metal Cartoon Squad. 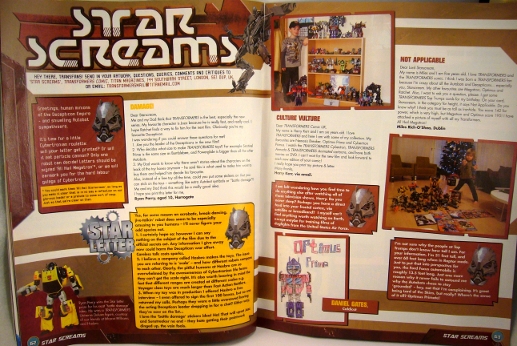 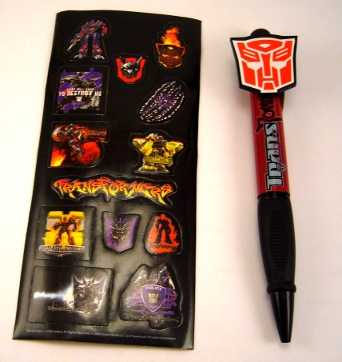 No poster this month but there does seem to be a double dose of goodies. A movie sticker sheet with a spiffing Autobot pen. 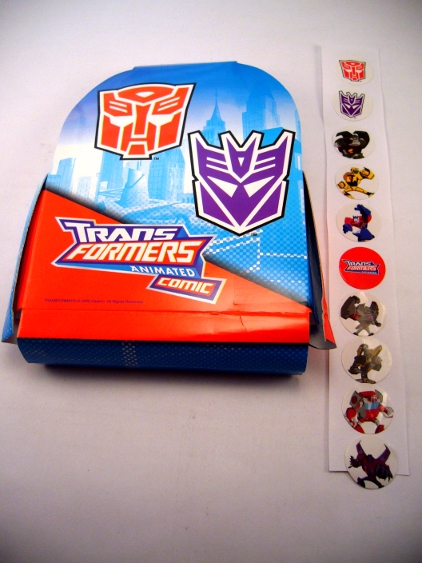 Plus a whole roll of Animated stickers!

Issue 23 seems to be a step up for this magazine, Great Job!