A note on format: The non-spoiler review, will be followed by a with spoiler synopsis. 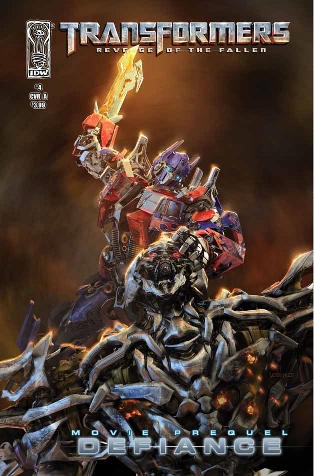 Defiance over all is stronger than its sister comic Alliance, but not by much.

Fortunately the series focused on the origin of the war, such as it was, and saved the RotF exposition-fest for this last issue. In this issue you can expect to find the Origin of the Fallen, his motivations, and history as well as that of the entire Transformer race. Despite a lot of discussion about the name, there is no revelation about what being a “Prime” means in this universe. The exposition density actually works in this issues favor as the influx of info stems the disappointment in the lack of a big finish.

Megatron, though, continues to be the weak link in this story. I have lost all respect for movie Megatron, he’s a mostly stupid thug, who is clearly being duped. He’s just sad.

The issue is written and drawn well, solid dialog and clear art. There is some issue with elements of the exposition not coalescing. In general the subject matter is functional and uninspiring, because the story of the movie-verse Transformers is groan inducing and trite. It’s like they took all the silly out of the other TF universe origins but forgot all the fun.

The ostensible purpose of prequel comics is to make you want to watch the movie, while failing to do that, Defiance and its sibling, Alliance, certainly seem to show us what we can expect from the movie.

Ironhide, last seen looking disgruntled at Megatron’s Decepticon rally, is trudgeing through the planes of Cybertron, in search of the Autobots. He is picked up by an Autobot Patrol and taken to Prime. He tells Prime he wants to join up and that Megatron is building an army.

Meanwhile Darth Megatron stands hands clasped behind his back (a pose G1 Megs recently took in AHM) and watches the construction of his new giant warship, revealed to be the Nemesis.

He then returns to his chamber to the magic mirror monolith Fallen phone. The Fallen needs the “Matrix” to be released from his dimensional prison. Then we get a Movie-verse Transformer history lesson.

The Allspark, sitting around on a barren Cybertron complete with energy pedestal, spontaneously creates the Fallen’s kind. Who are NOT the transformers. (Judging by silhouettes they are Bionicles.) They erupt from the ground around the Allspark.

This apparently drained the Allspark of its not so limitless power, conveniently a near by sun went nova. I’m not sure how that is a good thing, but it recharged the Allspark, which began to change Cybertron… and then needed more energy.

The Fallen says its kind, despite the random ability to jump dimensions, were unable to locate new suns for the Allspark to eat. (They’re those lights in the sky at night, dude.) So the Allspark pulled new life forms out of it’s… out of the ground. These were the first Transformers, who were to be workers for the Bionicles… er, Fallen race. They were created with the ability to change forms. (Doesn’t the Fallen do that?)

The Fallen describes all of the transformers that were created were “different and necessary”. This could be a reference to their being a history of “Primes” but that is not discussed here. So the Fallen’s race would send “Seekers” to go find new suns to blow up. The Fallen’s would all dimension jump there, Transformers would build a Harvester, which would, by the sound of it, harvest the sun’s energy. Now this is where it gets a little sketchy because the Fallen refers to wanting to “not share” the energy that the Allspark gave them, but that is also the first reference to the Allspark energizing them during this process.

Anyway this prompted the Fallen to kill his fellow beings, who some how post death managed to trap him in what ever dimension he is in now, from which he talks to Megatron through his Decepticon Pizza slice.

Fallen wants all power for himself, kills other Fallen race, gets imprisoned. Last Harvester is on Earth, in a Pyramid. Seriously. When the Fallen finds it he will have “Revenge”.

What is the Matrix he mentioned, who are the Primes? Not here.

The Fallen then informs Megatron that he, the talking slab of rock, will be leaving on the Nemisis with most of Megatron’s army to go look for the Harvester.

When Megatron inquires how the limbless disembodied voice is going to do this with out him he is punished, in a way that made me expect a Movie-Scourge to pop in frame and say, “But WE belong to HIM.”

Bumblebee and Arcee Spy on the Nemisis and talk about how big the ship is and how cool Prime is. Then head back to base. Prime and the other Autobots stand around wondering why Megatron wants such a big honkin’ ship, and decide that maybe they need a ship too.

Soundwave pops up for his one page to be told by Megatron that he (Soundwave) is going to go with the ship, onto which the “relic” has been loaded. Megatron clears the bridge to talk to the Fallen who tells him that when he gets back he will reward Megatron by letting him continue to rule Cybertron. (Which he really already did in issue #1.)

The Nemesis takes off packed with Decepticons. (This is the point I expected the Fallen Slab to peer out a window and yell to Megs, “Thanks for the army and the ride, Sucker!”

So Megatron and his much reduced force try to exterminate the Autobots and what follows is a pages long bridge/montage of war on Cybertron leading up to Optimus shooting the Allspark into space and Megatron following. The new retcon is Megatron breaking pursuit of the Allspark to answer a distress call from the Nemesis.

On arrival he finds the shipped empty and slagged. The Fallen slab is still there. It immediately asks if Megatron has found the Allspark, which is heading to Earth, because the Harvester is there. Upon discovering the negative, The Fallen orders Megatron to retrieve it immediately. As we all know, Megatron decides the best way to accomplish this is to crash into thin ice. The Autobots led by Prime take their new ship out. The Fallen waits. He is a rock, after all.