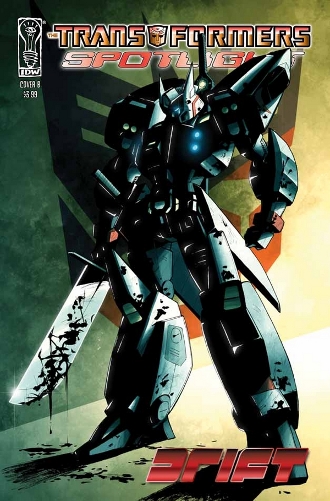 Spotlight: Drift is an excellent one shot comic. The only problems it has are contextual, so in the interest of a pure review of the comic itself, let’s save the contextual issues for the next section in which we will take a closer look at Drift and his emerging place in the IDW Transformer Universe.

All that out of the way, Spotlight: Drift is really enjoyable. Drift, the new character, and his past are briefly but competently explained. Shane McCarthy seems to have a gift for using implication and allusion to convey past events, allowing for a great deal of exposition with out feeling like the info was rammed down your throats. There is an interesting look into how the rest of the universe sees the Transformers. Besides humans we haven’t seen much of that.

The story is a good rescue/first meeting tale, origins aren’t explicit but aren’t obfuscated either. The issues several action scenes are fun and quick, keeping the issue moving but not taking focus off of our introduction to Drift, which is good. A slash-fest wouldn’t have told us anything. Not even the Wreckers steal focus from him. Another new character associated with Drift, Turmoil, is introduced.

Some notes of continuity, this issue briefly explains Kup’s recovery from his Spotlight, and may feature the beginning of Perceptor’s … change in focus. Also I get the feeling that Drifts origin will shortly lead us to a new story.

The art, courtesy of Casey Coller with colors by Joana Lafuente, is awesome. There is a certain washed look though. While it adds texture, it also gives the feeling that you’re playing this game with the gamma set to high.

Overall, great comic. This one can definitely be picked up on it’s own, and will be a boon to whatever collection it ends up in. Those who are keeping up with All Hail Megs month to month should pick this up, just so you know who Drift is. I imagine his part in that series is only going to expand. Trade hoppers may want to have this info too, unless your waiting for the Spotlight Trade…you get the idea.

If you’re not doing either, you should be.

Spotlight: Drift reminded me of something I’ve always said about the ’86 movie. “It’d be flawless had nothing come before.” Putting the marketing genius that lead to the movie’s unfortunate casualty count aside, if you were expecting to find the Transformers from the TV show on the big screen, then Mr. Spock and Bender battling for the fate of the universe was probably a bit of a shock. Viewed without expectation the ’86 movie is an epic story with a great cast, and fantastic animation (for it’s day). It was just hard to see through the “OMG they killed PRIME?!” Drift has a similar problem.

While a well written, well drawn comic, it’s main character’s status as new character draws extra scrutiny. The fanfic jokes are already flying (I’ve flung a few myself) and they’re not entirely unjustified. Comic books are full of cliché but much of that is “legacy” cliché. It’s established. Batman wears his underpants out side his clothes, but he’s been doing that since the 40’s you don’t have to explain it. If you make a new character however, and decide he’s fruit o’the loom challenged, your audience is going to ask “why?”.

Those are the questions Spotlight: Drift leaves unanswered. Why? Why should we care about this guy? Why is he worth reading? Why do we need a new character for this? Why is he so much cooler than the established characters?

Drift seems like a well developed character, I’ll grant that, but an ill-conceived one. The Ninja, Ex-Decepticon with a heart of gold, Dark Past thing is just really hard to swallow. Then we have his Huge Gun Arm’ed ex-commander, Turmoil, colored all black to Drift’s all white, Kup as the old warrior who sees through Drift’s past and gives him a chance… Did I mention the magic sword? Ok, It’s not magic (so far) but it's some ancient lost artifact on it and is probably the key to Castle Botskull.

Now having said all that, I personally think that the addition of new characters is a good thing for the G1-verse. It’s 25 years old. New blood is good. I’m just not sure if a Super Hero ‘bot was the place to start. 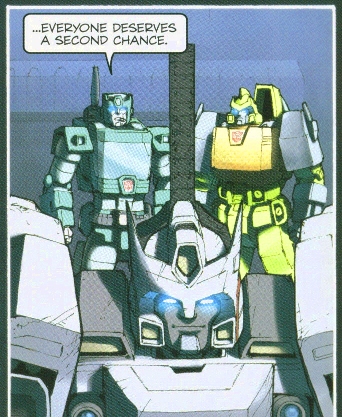 My verdict on Drift… I’m still reading, and I’ll cut back on the fanfic jokes. Spotlight: Drift’s quality as a comic has earned him a chance with me. However it’s a chance for Drift to work his way into the G1 pantheon, not a free ticket to rule it. He needs to be integrated over time, especially because he’s so overpowered. My great fear is that he will save the day in All Hail Megatron which would just make both it and him, jokes.

Spotlight: Drift opens in a bar on an alien world. The aliens are varied but are all roughly in scale with the a Transformer. Drift, wrapped head to toe in a very ninja looking outfit, buys codes to the docking platform of a nearby Decepticon ship, carrying prisoners, from a scantily clad alien girl. After a brief discussion on the rareness of non-hostile Cybertronian visits to other words and the general disdain that is felt toward them by other races, Drift is revealed by touch to be a Cybertronian, and leaves.

Disrobing, Drift then stealthily infiltrates the Decepticon ship only to be interrupted by Kup, Perceptor, and the Wreckers blowing a hole in the ship. This gets the attention of the oversized Turmoil, the ships commander. A battle ensues and Drift fights along side the wreckers, swords only, he does not use guns. Quickly questioned by Kup, and examined by Perceptor, it is noted he has no faction and has had a distinct kind of work done on him. 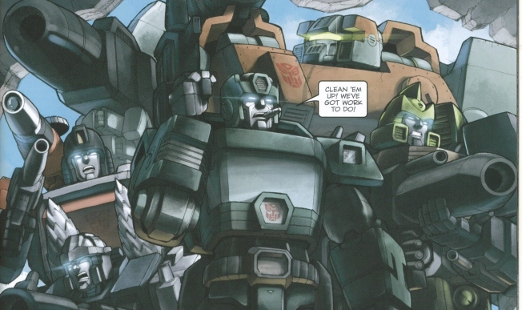 Drift leads the Wreckers to the Autobot captives and there is much rejoicing . Then Turmoil removes most of preceptors upper torso through a door. There is another fire fight, Drift charges the ‘cons and his voice is recognized by Turmoil, as the voice of Deadlock his former subordinate. Turmoil shoots a hole in the wall and Kup and Drift fall through plummeting to a lower level.

Here Kup confronts Drift about having been the Decepticon, Deadlock, apparently also a badass, and about the origin of his nifty longsword. Drift admits he was Deadlock and that a visit to a nameless lost third faction changed him and is the origin of his sword. Kup intimates that it was Perceptor who had put Kup back together again after the events of his spotlight. Then they decide to blow up the ship. Yay.

We jump to them riging up something volatile looking, conveniently located next to an open door. Kup is informed that the other Autobots have left the ship and intend to circle back to pick them up. Turmoil interrupts, a blast knocks Kup out the door.

Turmoil, informs Drift that he had been thought dead, Drift says that Deadlock is dead, and asserts his new name. Turmoil debates philosophy with drift as they try to stab and shoot each other. (Maybe that’s why his name is Turmoil.) Drift pins Turmoil to the wall with swords, Turmoil goads him to finish it. Drift hauls out, grabs what’s left of Perceptor and jumps off the ship. The Autobot ship can bee seen swooping in to save them as the Decepticon ship goes kablooy. 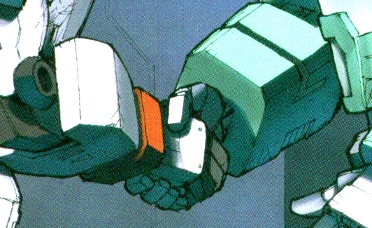 Back on the Autobot ship Kup offers Drift a place on the new team he’s forming complete with an Autobot symbol. Springer protests but is overridden. Drift Accepts.