Note on format: The Non-spoiler Review will be followed by a spoiler Synopsis. 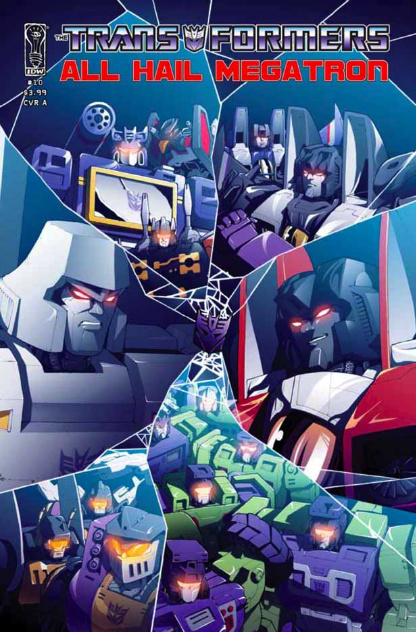 This is a hard issue to write a non-spoiler review for, there are some great moments in here and it would be best enjoyed with out spoilage.

This is a great issue. All Hail Megatron’s displacement of the Autobots has allowed for some of the best Autobot character interaction in the history of the franchise and this issue is no exception.

The Decepticons, as usual, are having a leadership troubles of the Starscream variety, and predictable as that is, this iteration caught my attention if not for it’s theme, for it’s content. Though the concept that the ‘Cons are rebelling on the cusp of ultimate victory is a little hard to swallow.

There were a few page turns in this issue that brought a audible “Woah” and/or “Awesome”.

It ends a little suddenly, but it will probably be like that till the end of the series. Just the hazard of having series built for Trade. We can probably expect non stop climax all the way through issue 12. Not a bad thing really.

The art is fantastic the whole book through.

Buy it, or put the money aside to pick up the TPB.

Megatron is contemplating the galactic effects of his newly completed space bridge with Bombshell. They discuss the use of Hunter O’Nion’s Headmaster implants to disable and locate all the Autobots, and how it was the process was… painfully developed, by Bombshell. Then the conversation turns to the threat that Megatron feels Bombshell’s intelligence poses to his rule.

Bombshell pleads innocent, but Megatron claims that he “sees all”. Then Decepticons begin to emerge from the rubble.

The story then returns to Cybertron and the exiled Autobots, prepareing for the Swarm’s attack. Some great dialogue here. The Swarm arrives and the battle begins.

Meanwhile, Starscream engage in the 2009 Decepticon Supreme Commander Debate. Megatron is very surprised to find that the Constructicons have turned on him.

The Autobots fight a valiant, though losing, battle against the Swarm. Ironhide and Mirage have a moment. Then just when they seem totally overwhelmed…

OMEGA SLAGGIN’ SUPREME drops out of the sky and blows the scrap out of the Swarm! He apparently got the message from Hot Rod. Prime asks how he survived the army of Decepticons that must have been sent after him, Omega replies “I am Omega Supreme.” Darn tootin’.

Prime orders Omega to transform and the Autobots finally get off of Cybertron. Prime orders course set for Earth.

Back on Earth, Megatron is fighting Devastator and doing rather well considering. As Devastator is about to finish the job, he’s hit with a barrage of missiles. Starscream looks up and is surprised to discover that the attack came from a squadron of Human fighter jets.