In this week's episode, Soundwave makes his return, the Autobots' human counterparts make their debut, and it's Christmas time.

This episode is definitely setting up Part 2 next week, so it'll just get even more interesting from this point forward. The episode was laced with good humor and some homages to Generation 1, which has been obvious throughout the series' run.

I'm going to be writing these reviews differently from now on, so be sure to catch my commentary in-line with the recaps now.

Like previously said, it's Christmas time, and the Autobots are celebrating, and Soundwave, is looking to put the kibosh on that type of shenanigans.

Prime still feels uneasy about the possibility of Soundwave being around, but others think that he's crazy. Well, he's right. Soundwave is just around the corner as Powell, now branching out on his own, has begun to sell the Soundwave toy.

Meanwhile, a possessed Soundwave infiltrates the Autobot HQ and alters the "Oil Nog" that Sari's been preparing for celebrations.

The Autobots drink it, and get drunk. Obviously, I mean, it's egg nog. I'm surprised that they actually did this in a kid's cartoon. Although I suppose children wouldn't really know this one except for the older folk.

Next morning, the Autobots wake up to find themselves turned in actual humans. Afer tests cannot verify how it happened, they venture over to Sumdac Tower for an analysis. 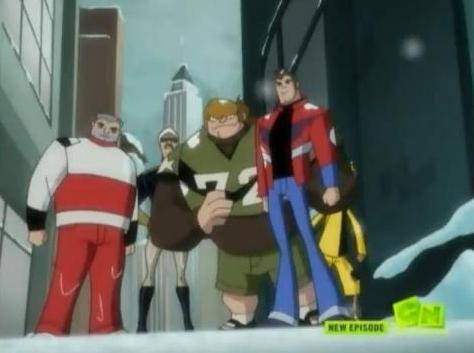 At Sumdac Tower, Sari and Sumdac are trading presents, where Sumdac replaces the old Soundwave toy with a new one, and gives Sari a jetpack. Now that's a Christmas present.

On their way to the Towers, the Autobots are struggling and also getting hungry. They decide to chow down and Bulkhead, chowing down too much Burger Bot, runs into the bathroom, returns, and continues.

While the other Autobots are trying to find another way for them to return to their bodies, Prowl is taking in the moment. He says that he is thankful for being alive in any form, but being human for once allows him to better appreciate this festive season.

Just outside, a Decepticon attack on Detroit begins and fire erupts in a building. The Autobos roll in and successfully save all of the humans from harm.

Back in the city, the human Autobots try to fight Starscream in their puny forms. After failing tremendously, they decide that their only way is to head over to Sumdac Tower.

Meanwhile, Sari visits the Autobots at the base to show off her net jetpack, but cannot find them. The evil Soundwaves start rushing towards her. She destroys them with ease and tries to find them.

On the Autobots' way to the Tower, they see Cybertron hovering in the sky and the Decepticons come down, hellbent on destroying the city as the Autobots watch.

We learn that the Autobots' minds are trapped while Soundwave reprograms them. Which completely explains the confusion that I had during the first three-quarters of the episode where everything was out of order. I mean, Starscream had a body? without an AllSpark fragment? Shockwave on Earth? Sari's a big girl but nothing is the same?

Anyway, now that the Autobots know the truth, they handily defeat the make-believe Decepticons and are able to transform into their old selves again. However, while trying to free themselves, Soundwave pops into their mind and immobilizes them.

Sari attempts to stop him, but she is easily defeated and is forced to retreat. Turning his attention back to the Autobots, we learn that oundwave's ultimate plan is to reprogram the Autobots into Decepticons.

This is definitely building up to something good. I enjoyed how they worked the human counterparts into the show, which we've all been guessing since the designs were leaked earlier this year. The episode itself was quite good, which included a lot of G1 homages. I'll see you back here next week when we do the dance again for the second half of "Human Error"