For those who remember BotCon 2007, you will also remember that Dreadwing was part of the exclusive package. Everyone wondered when Darkwind might make an appearance. After 2yrs, the 25th Anniversary line has answered the call, using Silverbolt's mold.

There are those who might call Darkwind bitter or pessimistic. In his opinion, if you're not at least a little bitter, your not paying attention. To Darkwind, life is one long, unending trial of pain and suffering. What's not to be bitter about? Some guys with his attitude write poetry. Others pain themselves black and mope. Not Darkwind. If life is going to be nothing but a pit of darkness, he's going to make sure that at least it's worse for everyone else than it is for him. 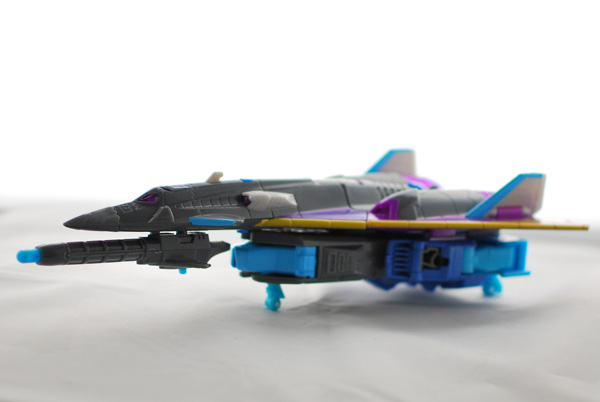 As mentioned, Darkwind is a repaint of Silverbolt. Although the jet design doesn't fit the G1 namesake, the colors certainly do. The mix of grays, turquoise, purple and gold virtually fall in the right place. The wings are purple with gold outlines. You will also note a gold lightning bolt patter on each wing. There is also a Decepticon insignia behind the cockpit. 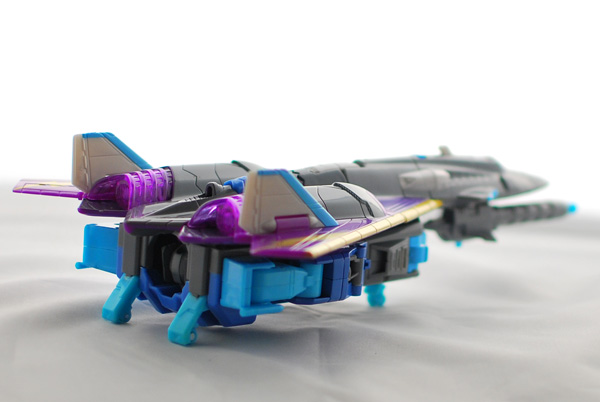 Darkwind also comes with the same sound package as Silverbolt, with the exact same 3 soundbites. They did manage to change the LEDs that accompany the sound effects to red. There is also the same weapon, painted dark gray with a turquoise missile. In the end, he is still just like Silverbolt... a quasi-shellformer. 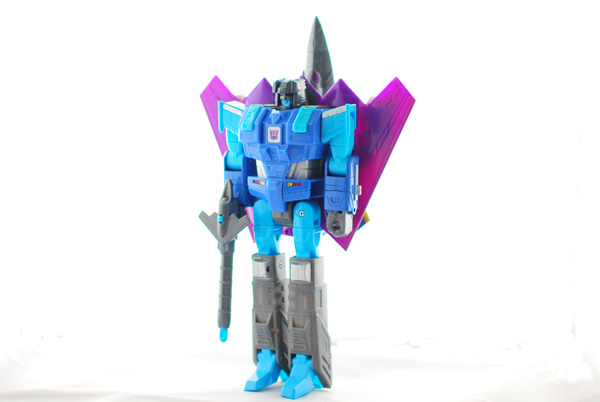 Although the jet design isn't reminiscent of the G1 namesake, the robot mode draws up a lot of similarities. The colorations are dead on accurate. Even the head colorations are spot on. The only real disappointment is that, since Dreadwing is a different class (Voyager) than Darkwind (Ultra), it'll be tough to find a fan-made combiner mode (yes, I threw the gauntlet down). 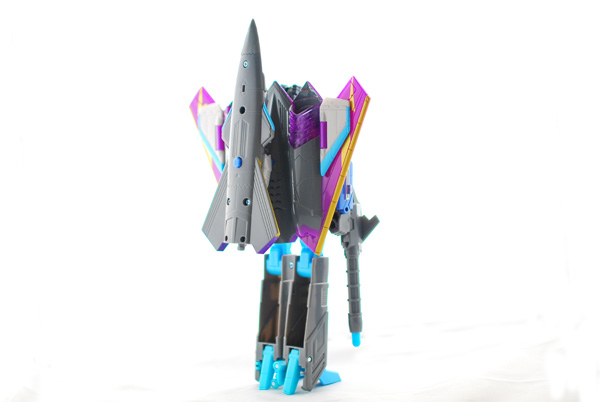 Like Silverbolt, the figure is rock steady in most poses. The pins holding the feet in place are loose, so you may find some frustration there. 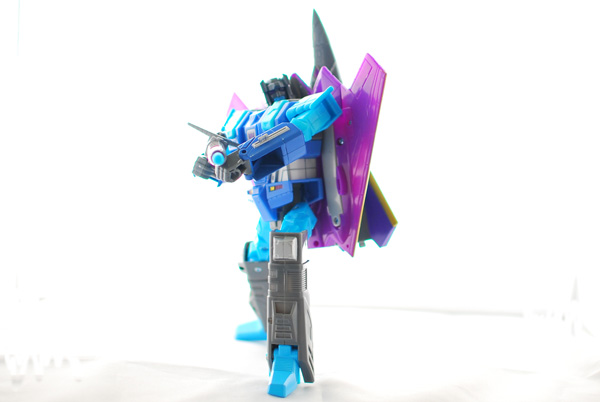 
Besides some looseness in the feet, very posable and balanced.

:Robot-on-a-jet is still tacky, but the colors are right on the mark.
Robot Mode -

:Almost nothing about this robot mode is wrong. Just watch the feet when posing. Overall -

: Being that mold choices were limited, they made the right choice with Darkwind.
Size Class: Ultra, Toys R Us exclusive
MSRP: $30