Human Error Part 2 picks up exactly where Part 1 left off last week: Soundwave continues his mega plan of brainwashing the Autobots into becoming Decepticons. He starts branching out into other areas, though, including the brainwashing of all organics, dubbed “Operation Organic Control.” When he finds that Sari cannot be controlled, he must destroy her.

Meanwhile, Sari is trying to save the Autobots, and ventures to Dinobot Island to gather some troops. Grimlock and Swoop don’t help, but she runs into Scrapper, where we last left him in “Three’s a Crowd.” He’s reluctant to help her at first, but after convincing Scrapper that he can just build a boat back to the mainland, he decides to go with her.

Also, during his time on the island, he has acquired Snarl as a pet. Scrapper was going to originally name him Slag, but, “he took it as an insult.”

Along the way, the run into Wreck-Gar and the return of Weird Al Yancovik, who, well, makes Wreck-Gar just as weird as can be. Definite plus. The Substitute Autobots are set, and they venture to rescue the Autobots. 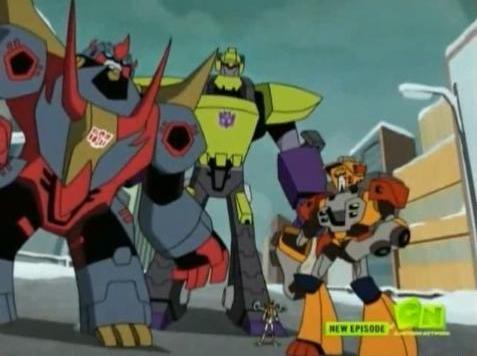 Unfortunately, the real, albeit brainwashed, Autobots, find them and are hellbent on destroying her. Soundwave controls them like puppets using Ratbat and easily defeat the substitutes. However, through some of Sari’s leadership skills and Scrappers revelation that only one person is controlling them the substitutes split Soundwave’s concentration by attacking individually.

Once the Autobots break free of their mind control, Optimus Prime and Soundwave duke it out. Prime exacts his revenge on Soundwave by using his own weapon against him. Capturing Lazerbeak and forcing him into his guitar, Prime has an axe battle with Soundwave, smashing him into a thousand little pieces.

As Soundwave no longer functions, all of the Soundwave toys being marketed by Powell since last week and well into this week, are doomed. Sari and Prime both agree that it’s not easy being a leader, nor is it easy being an organic.

Some other thoughts: Well, that’s it for this week. While a great dual-parter, I feel like it didn’t really do anything to add to the actual progression of the series.

Hopefully when Blitz-wing joins you next week, we’ll get some answers.