Episode 3x11: This Is Why I Hate Machines - Transformers Animated - Cartoon

This was a great episode that builds up for the upcoming two parter season (series?) finale of Transformers Animated. As the name of the episode doesn't really give it away, this episode (finally!) stars Dennis Fra-uh, I mean, Captain Fanzone.

Ratchet turns out to be looking for Omega Supreme, who, as we last saw, ran into Lugnut. When Ratchet does find Omega Supreme's energy signature, the Space Bridge opens up and Fanzone is sucked in. Ratchet goes, too, both to save Fanzone, and to find Omega.

Now, why Fanzone in the same room as Ratchet is rather stupid. He gets upset about a Sumdac product, and decides he will bypass that hell of a place called tech support, and take it straight up with the CEO.

Turns out, Omega is located at Cybertron, but we continue to learn more about why Sentinel Prime was afraid of organics when they first arrived on Earth. The rest of the bots are just as afraid, and they all run away in fear. 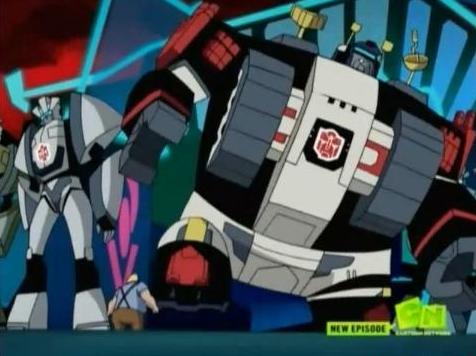 Sentinel Prime, after being made acting Magnus by the Council, has started a type of fear campaign and alerts the public to report all suspicious activity. He is hitting home that message by using Ultra Magnus' stasis-locked body to further is own agenda.

The status of Omega Supreme is finally revealed to Sentinel and friends, and Sentinel decides that blasting Omega out of the Cybertron sky is the best way to save the planet. The council, however, does not agree and needs to deliberate. It turns out that Alpha Trion doesn't exactly enjoy Sentinel's methods, nor his ability to lead the planet.

Megatron and crew have learned how to stop Omega from randomly transporting across the galaxy (which most likely explains how he found Lugnut in Decepticon Air). However, his weapons are still offline, and that's what they're doing on Cybertron.

Shockwave, still semi-operating under the Longarm works, turns out to be looking straight for "the source" to learn of these codes. It turns out that Arcee is the carrier of these codes, and that she was irreperably damaged to learn anything from her.

and now you've made me an accessory to intergalactic grand theft!"

During Ratchet and Shockwave's many confrontations this episode, Shockwave wields Magnus' awesome hammer, which he only knows how to semi-use. He is mostly still outmatched by the old-time Autobot, who manages to steal the hammer from Shockwave.

When the Fanzone and Ratchet cross into the space portal for Earth, Ratchet runs and takes the hammer with him.

Now that you know Fanzone's ultimate adventure, some additional notes:

Overall, this episode was quite enjoyable and definitely forwards the story a lot. We continue to learn Megatron's grand scheme of taking over Omega to take over Cybertron as well as Sentinel's continous grab for power.

Over the next two week's, if the show is to end, I hope we get to learn at least the endgame. But for those, you'll just have to learn what happens from my reviewing partner-in-crime Blitz-wing. I'll just sit back and scream at the t.v. just like the rest of you.