Note: The non spoiler review will be followed by a full spoiler Synopsis. 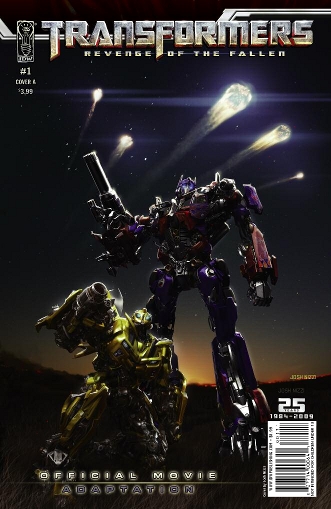 Spoilers. Some fans can’t stand them. Some hunt for them relentlessly. From screen caps to coloring books this fandom has been scrambling for every bit of info his imperial Bay’ness has let slip for months.

Spoilers. If you don’t want’em you probably already stopped reading. But if a sneak peak is what you’re looking for. This is THE place to be.

Penned by legendary Transformers Comic scribe, Simon Furman, this is the official and hopefully accurate comic book presentation of the Transformers: Revenge of the fallen film. If you want to know what awaits you in the theater but don’t want to read a novel, this is the place to look. The only detractor to this adaptation is that sadly artist Jon Davis-Hunt’s humans do not match his command of the Transformers themselves.

On a personal note, these comic adaptations are giving one of the first movie’s critics (me) hope that this sequel will blow its predecessor out of the water.

Thousands of years ago, The Fallen supervises the building of what is now widely known to by a Solar Extractor. He comments on the frailness of life on the planet he intends to destroy the sun of. It’s ours. So much for “Their War, Our World.”

Bump to the present. The Autobots and N.E.S.T. (what is up with that name?) battle Decepticons in downtown Shanghai. (or as Lennox put it at the end of Alliance #4 “SHANGHAI!!!”) After a brief battle Prime takes out Demolishor, and Sideswipe eviscerates Sideways.

We move to Sam packing up for college while making unrealistic long distance relationship plans Mikela on the phone. While examining his “lucky” (IE: Unwashed Mission City) T-shirt. 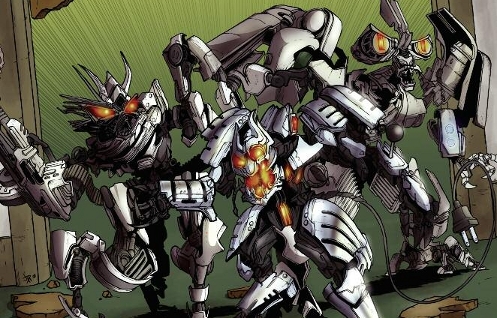 An Allspark Fragment falls out filling Sam with Allsparkiness and turning his kitchen into a death trap full of appliance bots.

(You’d think after nearly a century of secrecy Sector 7 would have checked Sam for interstellar Doom Debris.)

Bumblebee loyally destroys Sam’s house containing the problem. This leads Mrs. Witwicky to tell Sam that Bumblebee has to go when Sam does. Sam informs Bumblebee and entrusts the Allspark fragment to Mikela. (More national security.)

Back at N.E.S.T.’s base a new character, clearly a jerk, named Gallaway is taking control under the auspices of the President. You can just tell this guy is related to Walter Peck from the Ghostbusters (AKA: Mr. Pecker.”)

Prime describes how the Decepticons have attacked several different continents. Galloway points out every childish thing the Autobots have not done for them.

All under the attentive audio receptors of Soundwave, who monitors the communication from orbit.

Sound wave obtains the location of the Allspark fragment we saw at the end of the movie. Prime agrees to leave earth if it is deemed in the best interest of humanity.

Ravage steals the Allspark fragment from a Government facility.

Sam meets his new roommate, who is a Transformer conspiracy buff. Ravage is dispersed to find the missing Allspark fragment. Alice, a girl in Sam’s class is being very clear about her desire to be with Sam. Just then Bumblebee shows up to pick up Sam and take him to Prime.

Prime asks Sam to advocate for the Autobots, Sam apparently has to many keggers in his schedule to help the aliens who saved his life or to defend his planet from giant robot invasion.

Ravage brings the Allspark shard to “the Doctor” who has been working on Megatron at the bottom of the ocean. The shard is put inside Megatron and A’la Animated, the Decepticon leader is brought back to life via an Allspark fragment.