As of this writing, there is only one week left to go before the Revenge of the Fallen figures start hitting the shelves at your favorite retailers. Although sightings have been found, strict street date enforcement has prevented most from taking any home. Tformers.com was lucky enough to score some figures ahead of the release date, and we're only too happy to give you an advance review of the production grade figures. First up is Sideswipe, the Autobot swordsbot, 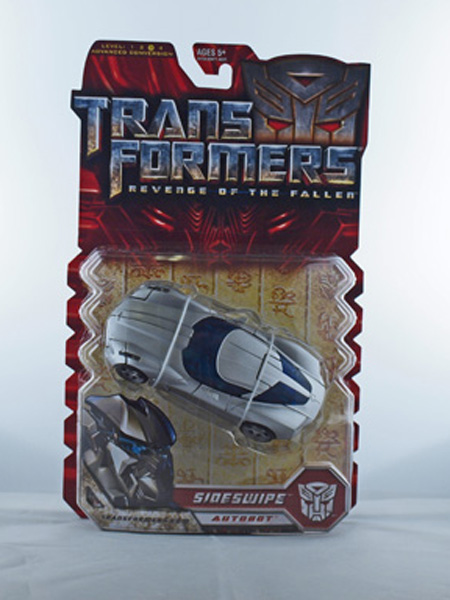 The packaging has changed quite a bit for the second movie. The Transformers block lettering remains the saame, with an Autobot insignia resting behind it. Most of the packaging is a vivid red, with carvings built into it. Where the figure sits within the clamshell, you will see Cybertronian hieroglyphics (along with an occasional Decepticon insignia) done in a sandy tan. The sides of the box are notched out to give it a blocky appearance. The back end is the familiar black paneling with the bio and tech specs.

Sideswipe was built to fight. He is sleek, fast, and single-minded in battle, focusing on his enemy with absolute attention. His blades are a shining blur as he leaps through the air, twisting to avoid enemy fire. Converting from vehicle to robot at blinding speed, he uses every trick in the book to get close to his opponent, and put his powerful swords to work. 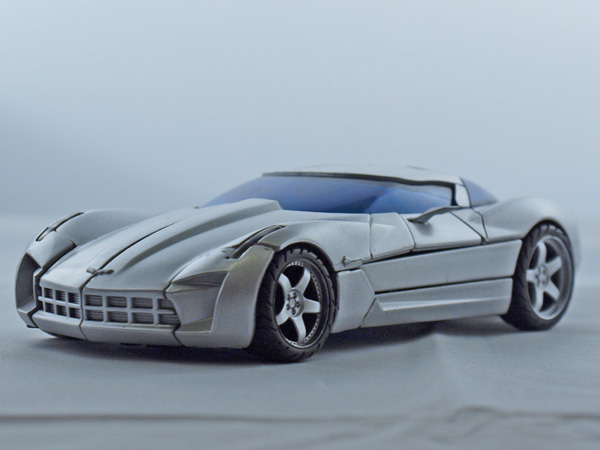 Sideswipe is based off the conceptual Chevrolet Corvette Stingray from 2008 that is rumored to be just a styling exercise. Don't be surprised, however, if the populatiry of the design, coupled with the movie release, produces a change of heart at GM. The design itself is a heavy reference to the iconic 1963 Stingray, complete with the split rear window. The vehicle is entirely silver, with blue tinted windows. 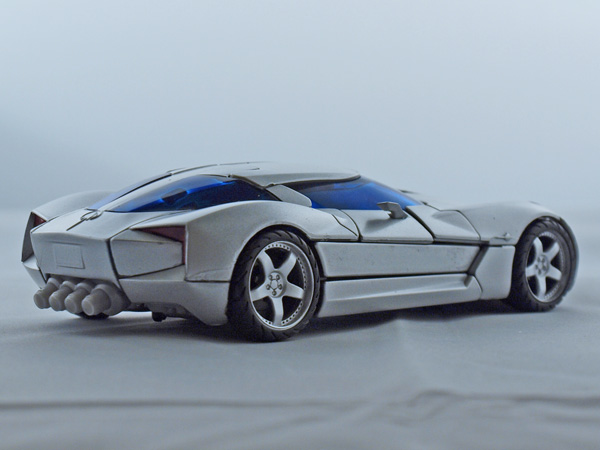 You can spot some details, including the Chevrolet rally insignia on the hood, the Stingray logo on the decklid and the quad pipes centered on the rear bumper. The mirrors are rubberized, so there's no fear of breaking them despite their small size. The rims are especially detailed, right down to the many rivets riding on the sides. The seams are minimal, although the door area has some gaps too it. Overall, a very beautiful design that would be a boon if released to the public.

To start the transformation, pull down on the corners of the front end to dislodge it from the hood. Pull down, then in, on the rear wheels to dislodge the arms, then pull them out and back. Take the front end and pull it forward in a half-moon motion. Separate the hood in two and pull it out in a wingspan to the sides. Pull down the roofline, which will swing the body forward. Swing the hood halves back towards the rear.

Rotate the arms so that the door sides point up. Flip out the hands from the forearms. Rotate the corners of the front end so the foglights point forward. Find the faux tire sidings and flip them 180 degrees. Then, flip the front end pieces 180 degrees to finish forming the “feet”. Spin the hood halves so that the hood top points out to the side. Pull the center of the rear end back to expose the head. Lock the tab located on the upper torso to the rear end and his head will pop up. Rotate the hood up, then use the pivot point on the joint to fold the roof down. If done right, the grille should be pointing to the ground. 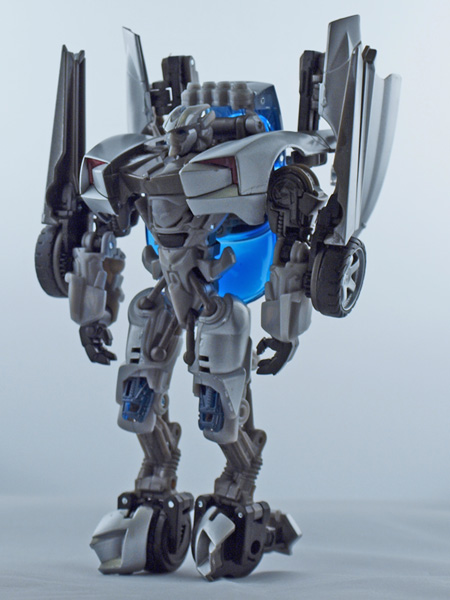 Sideswipe is as equally impressive in robot mode as in alt mode. A little more color comes out to break things up, including the gunmetal gray knees and the gray struts along his hips. Detailing is also very night and although the design looks busy, it never looks cluttered. The head design is in keeping with former movie figures. It is otherworldly, yet has humanoid features. The eyes are piped in blue. For the Mech Alive gimmick, his knee armor extends slightly when the knee bends. That's it. 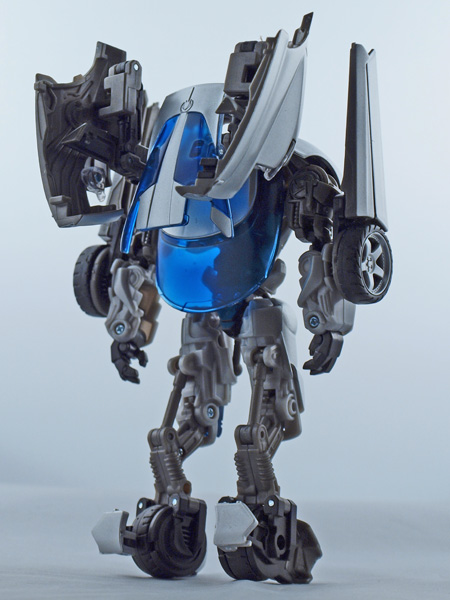 Sideswipe has no hand weapon, but he does have his door panels. By splitting the door panels and two and conversely rotating them to his hands, you form his swords. If you want, you can also keep the two halves slightly open to form a sai type weapon. There are two problems with the figure. First, the tab that holds the torso to the neckline isn't very strong and can pop out of place with little effort. Perhaps more annoying are the 'feet'. The wheels are noticeably lower than the footprint, and there is no way to adjust the small footprint to balance both sides. Therefore, good luck trying to do leg poses unless you have something to prop it up against. 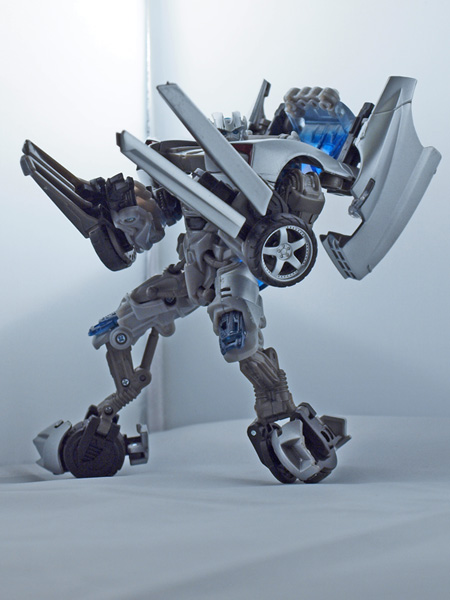 
Leg posing is very limited, which is a moot point since his footing is very poor. The constantly dislodging torso further frustrates posing, but this might be an isolated issue.

This is a very cool figure that's worth adding to the collection. Just don't expect to get much standing poseability from it.