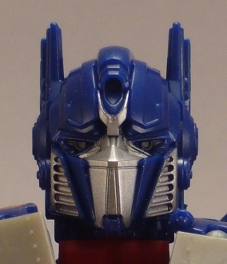 This is the Revenge of the Fallen Optimus Prime to get, in case you hadn’t made up your mind. No longer are we forced to decide which poor representation of ILM’s clockwork masterpiece we should choose to represent the Autobots’ leader on our shelves. This is the movie Prime. However, when it comes to transformation, you may want to free up some time...

“With the destruction of Megatron, Optimus Prime thought that he was finally, after millions of years, at peace. Little did he know that the escape of Starscream would draw dozens of new Decepticons to Earth. The desire that burns brightest in his spark is that the war will soon end. He is determined to see that end come, and so he works with his human comrades and the other Autobots to hunt the Decepticons that have come to Earth and destroy them, one by one.” 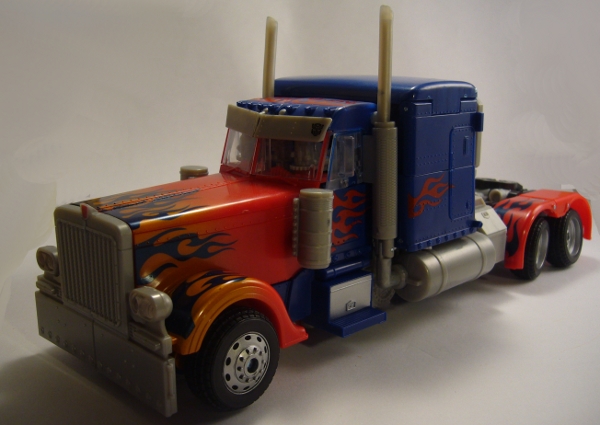 Leader Prime’s vehicle mode is great. It minimizes seams and presents all the flame-y Peterbilt goodness you could ask for. The Mech Alive gears can still be seen behind the clear windshield but this is no great detriment. The tires roll nicely, despite not being rubber. Pressing on the side will reward you with an engine-revving noise. 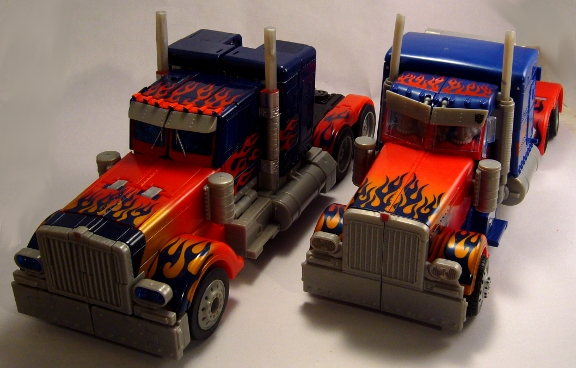 Just a little longer, but shorter tire to roof than its predecessor, the RotF Optimus Prime truck surpasses the ’07 movie Prime in every way. As a side note, the truck’s visor has two independently moving parts, which allows for some great vehicle mode expressions! Such as: 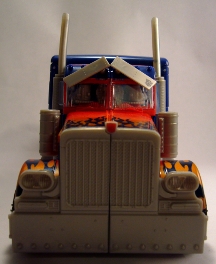 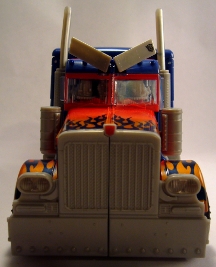 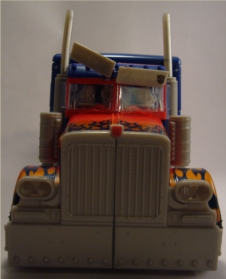 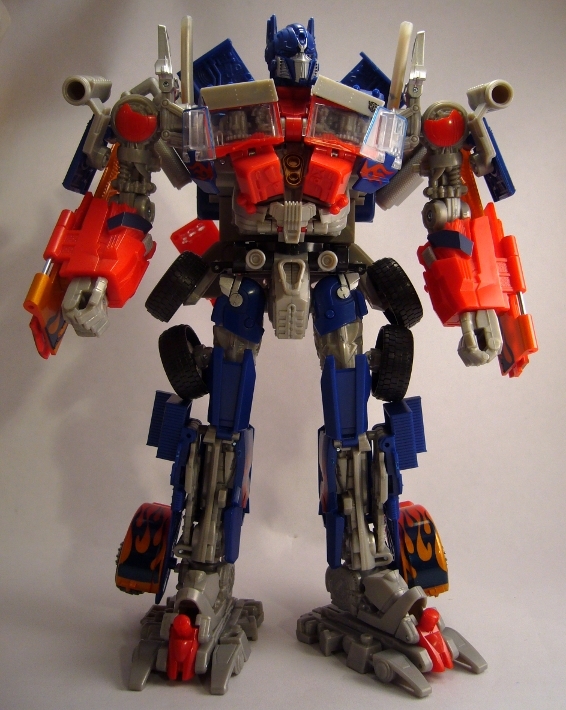 Leader Class RotF Optimus Prime’s robot mode is a marvel of engineering and screen acuity. You can tell some of Hasbro’s people wasted no time after last year’s line putting this beauty together. No longer the bricklike kibble-fest of days of yore, movie Optimus Prime now has a truly worthy toy manifestation. 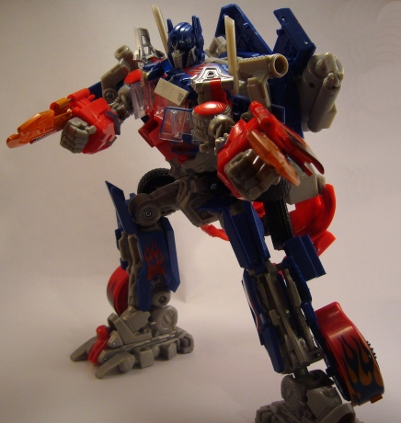 Great head sculpt, excellent proportions, 17 points of humanoid possibility, and for the first time you can look at a transforming movie Optimus toy and see a real likeness to the onscreen portrayal.

The swords are a welcome play addition and are also much more screen accurate than previous attempts. They fold up a little high and interfere with the shoulder possibility ever so slightly. The triggers are a little light, as well. If you look at this toy and think too hard about the swords popping out, they probably will. (Perfect for practicing those Jedi powers.) 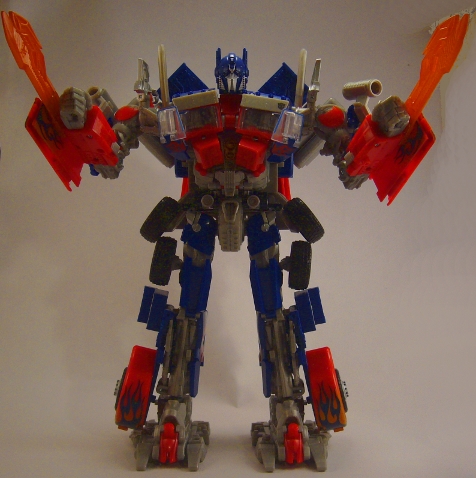 Pulling out a small tab on the abdomen and pulling down activates Prime’s voice and light component. Red lights in the chest and a green one behind the eyes flash as Peter Cullen says. “I am Optimus Prime.” Sadly, like a first quarter high school French student, this seems to be all Prime can say. 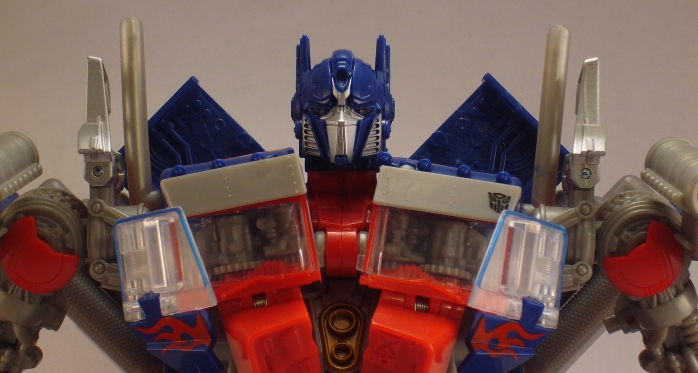 The “Mech Alive” feature is a little underwhelming. “Mech Alive” is meant to invoke the intricate feeling of transformations in the live action movie (which won’t be a problem with this toy, but I digress). A small set of plastic gears moves visibly behind Prime’s windscreens during transformation and when his voice and lights are activated.

While they do give a sense of internal movement, during transformation they are barely noticeable, and when you make Prime speak they barely move. Overall they are not worth the kibble – a problem carefully avoided elsewhere on the figure that is present as the toy stands at rest.,

One can only hope that given the mediocre response to “Automorph” that for Transformers 3: Rise of the Go-Bots Hasbro will abandon this gimmickry and just focus on making good toys. Don’t tell anyone, but Transformers already have a gimmick. They transform.

Turning this toy into a truck could take years off your life. Not figuratively, either, since you might just be there that long. The short way to describe this toy’s transformation would be to say it breaks at the waist and bends in half to form the truck.

The long way would be like describing how to make a functional origami VCR. Here are a few illustrations.

These pictures are not intended to portray the transformation exactly as rendered by the instructions, nor to offer helpful visual tips. These pictures are to make sure you are aware of the nightmare that awaits you all.

Hope fully this doesn't overstate the complexity of this Prime’s transformation, but it was off-putting. By the way, the chest pieces of this toy HATE you. They didn’t want you to buy it and they’re not too happy about the toy they’re part of.

There are some clever tricks the designers pull on this toy. Those chest pieces I mentioned have a couple of visual cheats for Prime’s Robot mode – the kind of hidden detail that made some of the Animated toys great.

When converting to truck mode, the edge of the chest pieces folds down into a small groove in the arms that runs lateral to them. These deep ridge makes the whole truck alt-mode work. I could almost call it genius, were it not that it is such a precise movement it’s like stopping in the middle of the transformation to thread twine through a needle.

Parents, stick with you kids while they Transform this one. They may need help (can’t wait for the stream of letters from angry kids telling me how they were able to transform Prime in 22 seconds).

Despite these complaints, there is no arguing with the results. Two phenomenal forms.

If you like movie Prime, and want a toy of him, this is it. Anything else (I’ve seen) is a pale imitation. Plastic quality is better than average these days. Flawless paint work (on this one anyway). Play value is great, just shy of fantastic by virtue of the uber-difficult transformation.

This toy is a must buy for the Revenge of the Fallen line. Possibly its crown jewel. 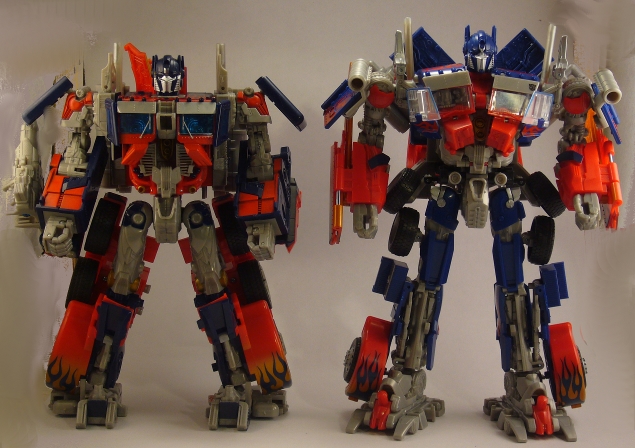 Get ready for Ebay to be flooded with ’07 Leader Primes…

Prime is possibly the best and certainly the most faithful to his traditional look of all the onscreen movie Transformers, and this toy is his avatar. He will be a welcome addition to any Prime collection, and will tower over all other current movie Primes you have not only in size, but also in quality.