As we wrap up our reivews for the first four Scout class figures, we come across Knock Out. At first glance, he looks like a repaint. However, he is indeed his own bot. However, after reading his bio, you might think he is a reincarnation of Energon Ironhide.

Though he is an incredibly flashy and skilled fighter, Knock Out is also desperately insecure. he practices awesome combat maneuvers constantly in private to be sure that the other Autobots will notice him on the battlefield. His highest ambition is to be the leader of a special combat team, and to get the combination retrofit everyone has been talking about. 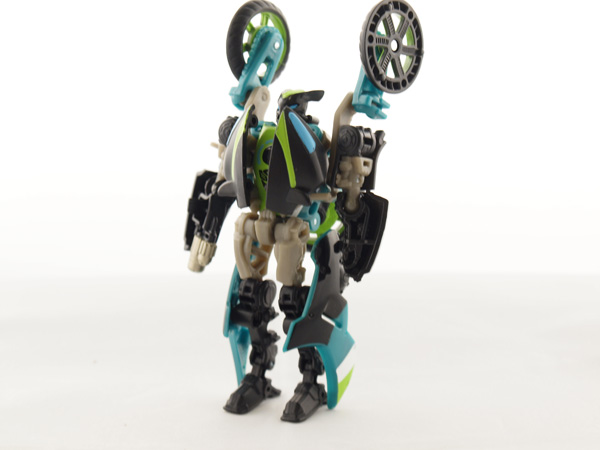 Knockout's initial appearance might take some getting accustomed too. Primiarily black in robot mode, there is a mixture of dark and lime greens, some blue and silver. The rear wheel, which is split in two, rests on either shoulder and can be positioned in several ways to meet your liking. The head sculpt is simplistic and strangly has a sort of rebel biker feel to it. 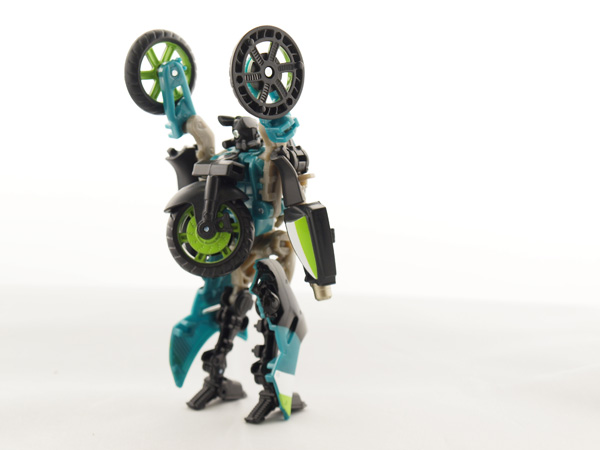 The exhaust forms a gun hand on the right arm, with the left arm having a molded fist. Overall, it's a right figure with good range. The only sticking point is where the waist meets the chest. Like Sideswipe, the tab doesn't lock, so the chest can separate while posing. It's a minor annoyance. Another minor annoyance are the skirts on his legs. They are pegged in, but constantly fall off. 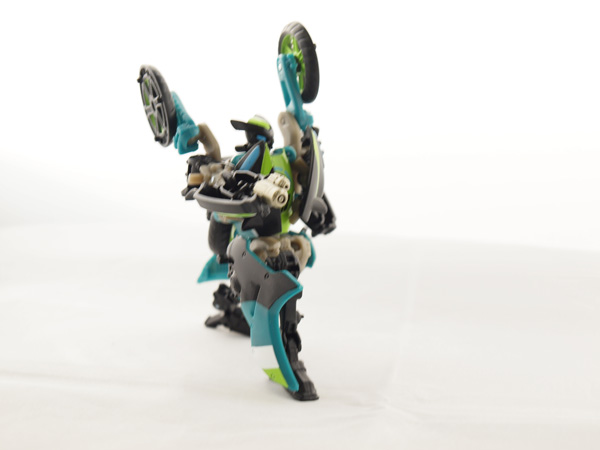 
The shoulders are somewhat restricted due to the wheels. There is no way around it.

Position the wheels on his shoulders so the outer rims face each other. Rotate the forearms so the hand/gun face to the outside. Pull the wheels to the sides slightly. Pull out the chest panels, half moon style, until they join to cover the head and form the windscreen. Raise the arms so they're about 60 degrees from the horizontal. Complete folding the wheels around so they form the rear end. Fold both feet completely back. Rotate the front wheel so it's straight on. Bend the knees completely back, then fold them under the bike. If done correctly, the knees will be slightly visible from the skirts but all else will be hidden. 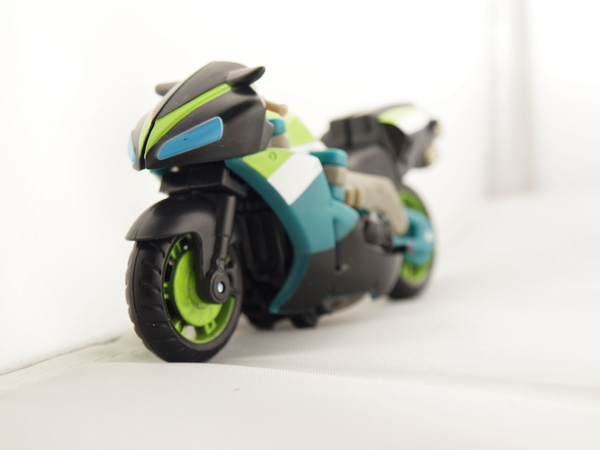 Knock Out is disguised as a speed bike. While some might grimace about the color combination of greens, white and black, it actually looks decent given the alt mdoe chosen. It's a rather accurate portrayal, too. Although the handlebars don't turn, the front wheel can pivot in either direction. 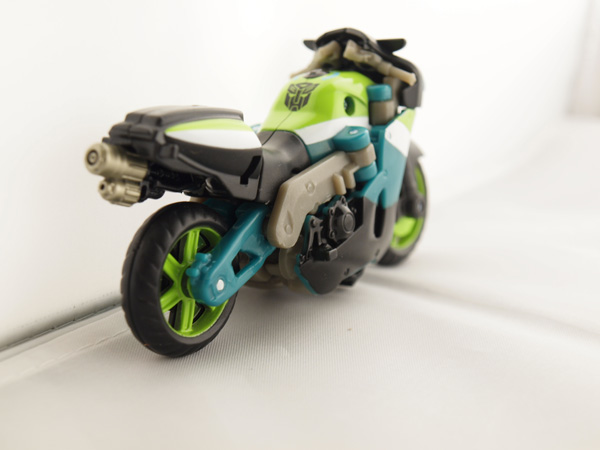 One vital part this bike is missing is a kickstand. Without it, you have to rely on propping it against something to keep it upright. That's a shame, because other recent 'bike bots' have been given kickstands. Even without the kickstand, though, it's a sweet looking bike.

A nice attempt at a bike, but minor annoyances keep it from being great.