Up until now, the Autobots didn't have any flyers for their army. That put them at a disadvantage against Decepticons such as Blackout and Starscream. That all changes now, as Breakaway joins the lineup as a Deluxe class offering.

Serving in an army of robots tied to the ground makes Breakaway unique. He is one of the very few amongst the elite Autobot flyers, and he is unmatched for speed in a straight line. While other pilots focus on aerial acrobatics that confound the enemy, Breakaway is content to speed over a fight at seemingly impossible velocity, releasing bombs and missiles that strike their targets before the thunderous boom of his passage can catch up. 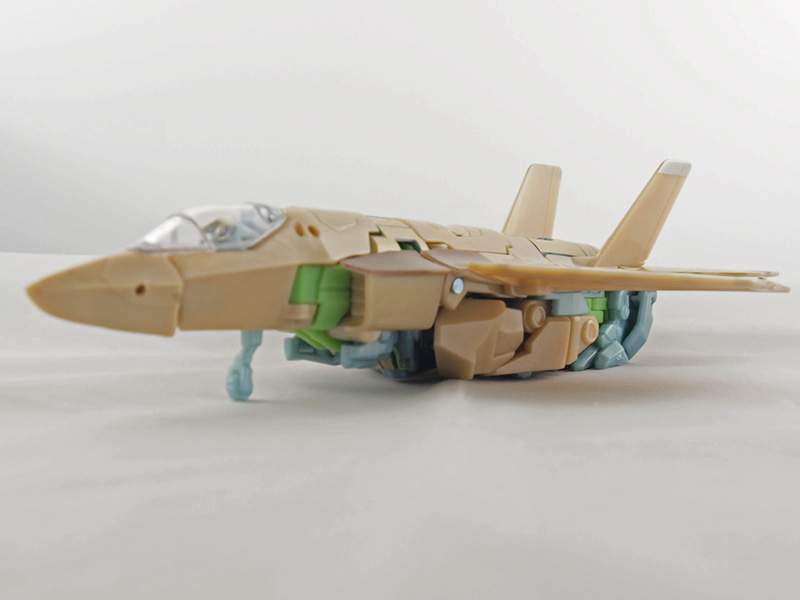 Breakaway is loosely modeled after the Lockheed-Martin F35 "Lightning II" fighter jet. The jet has a summer camouflage scheme, using mostly khaki colors with some dark brown and shades of green. There is also some baby blue and medium green present. 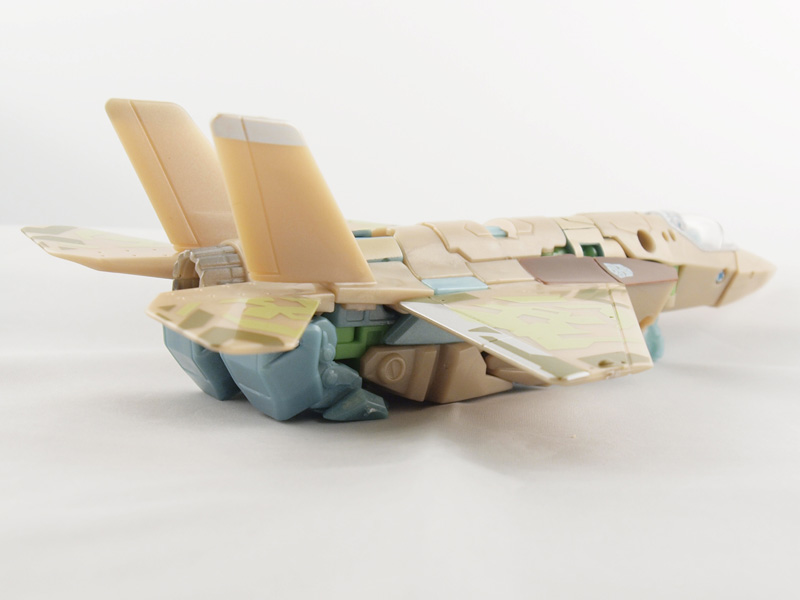 The nosegear has a retractable landing wheel, but the rear wheels are built into the belly. The cockpit has a clear window, exposing the head. However, it almost looks like it could be a fighter pilot in there. The belly is slightly cluttered in appearance, but is overall very streamlined compared to other TF jets of the past.

Pull up on the wings so the entire intake ports and wings flip up over the cockpit. Tilt forward on the cockpit to break the hands free from the rear. Pull the arms apart and swing them to the sides. Pull down further on the cockpit of the jet so the nose points straight down. The nose detaches from teh cockpit to sit at an offset.

Twist the vertical stabilizers so they're at a 90 degree angle. Fold up the engine pack on his back, it attaches to a hook. Flip the wings so that the underside shows at the front of the robot. Open the cockpit window to fully expose the head. Flip out the feet and straighten the arms to finish the process. 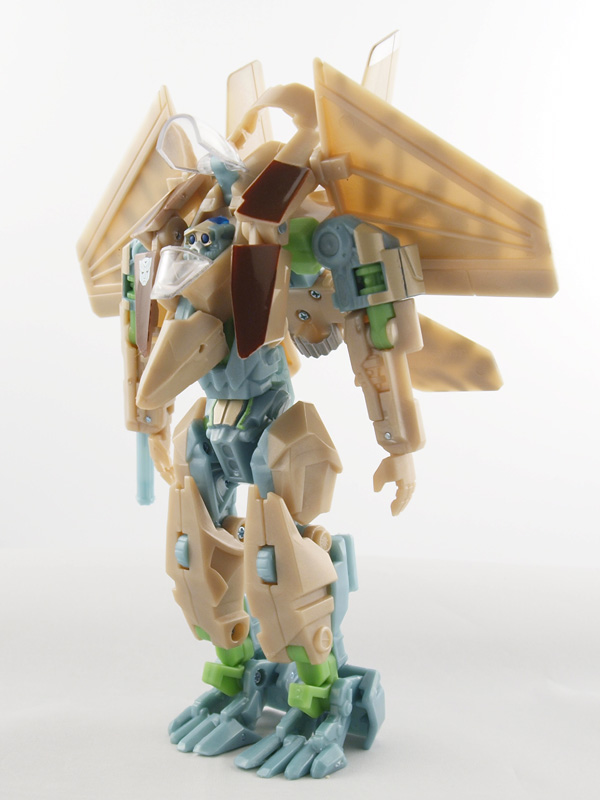 The robot mode design is very unique, in keeping with the movie designs. More bright green and baby blue appear in this mode, mostly on the limbs and abdomen. The head in particular is unique, due to it resembling a fighter pilot's helmet. There is blue piping for the eyes, but the window is very small. 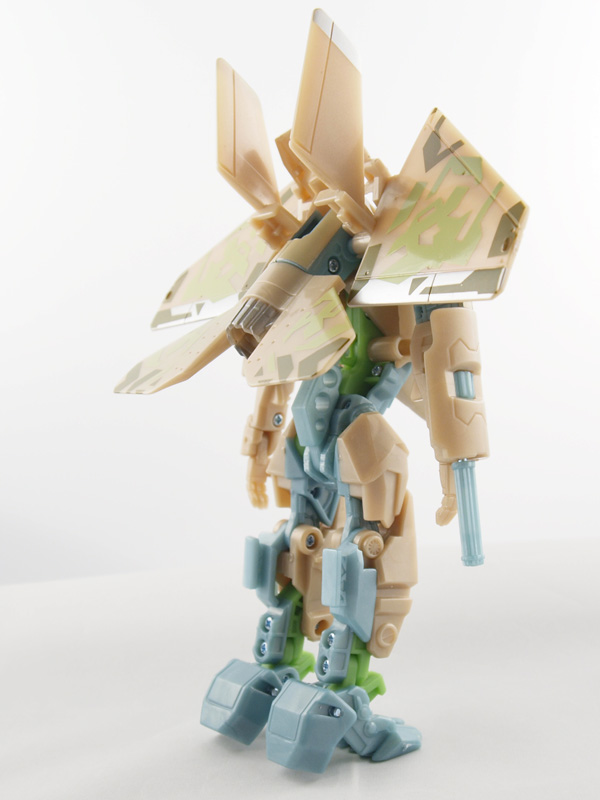 I have to admit that the Mech Alive gimmicks for the Deluxes is pretty weak so far. In Breakaway's case, a thumbwheel on his right forearm spins the gatling cannon forever attached to said forearm. No automorph gimmicks, no other cool surprises. In comparison to the Automorph gimmick, this seems trivial by comparison. 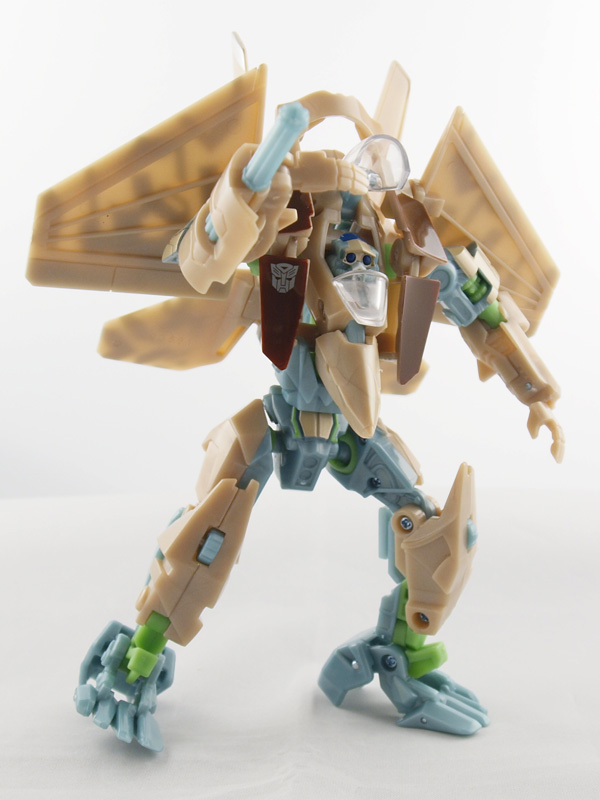 
Wing kibble interferes with arm posing slightly, but the figure does have a solid footing. The waist is pegged, but due to the way the backpack snaps in place it can't move.

Pretty good for a deluxe, but the Mech Alive gimmick leaves you wanting more.
Overall:

One of the more interesting jetbots released lately. A little more thought into it could have made it very nice.