There's going to be some new alt modes, as well as some new takes, for the movie. One of those new takes are fembots. Normally an obscurity in the TF universe, with only one or two references, the movie will be seeing a total of three female Transformers... all as sport bikes. We look at Chromia first.

Chromia is tough as nails, and always spoiling for a fight. She's been friends with Ironhide for centuries, and their reunion on Earth was one of the high points of the war for both of them. now, they work side-by-side, hunting and destroying Decepticons. Neither of them has ever been happier. The two robots make great partners, and she, along with her two sisters, are an invaluable part of the team. 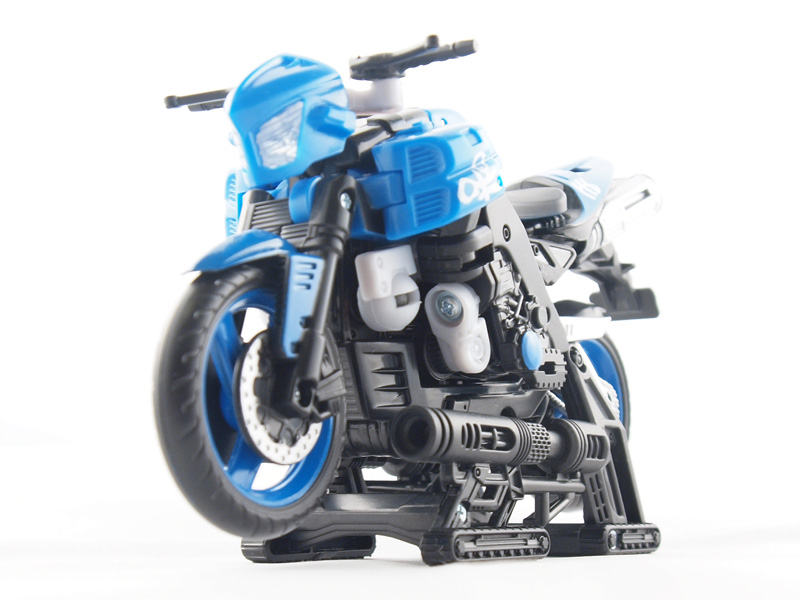 Chromia is modeled after a sport motorcycle. Although there are elements suggesting several different brands, the bike itself bears no strong resemblance to a single one. Perhaps licensing issues. The bike is blue with black. A pair of mufflers rides up behind the seat. You'll also note various symbols on the fenders and fuselage of the bike. 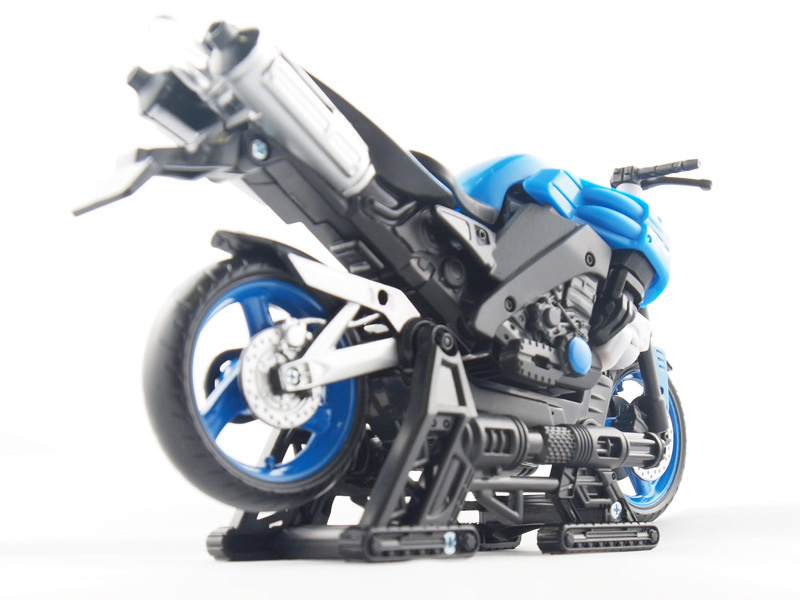 There is ample amount of detail on the bike. The brakes and chain assembly are very nicely done. The handlebars are rubber and can be adjusted. Two small detractions for this mode. First, the kickstand is just a hair too short, so you have to lean it right to have it sit independently. Of course, you could also use the bike stand supplied. But why do that when you can mount the stand on the mufflers and have a pair of guns? Also, the license plate bracket is very thin and split the first time I attempted to move it. Use caution.

Peel the rear wheel upward. Fold the seat so that it sits in a groove on the belly of the bike. Rotate the headlight 180 degrees and collapse the handlebars. Flip out and position the head, then join the 2 halves of the chest together using the series of pegs. Finish up by CAREFULLY folding back the license plate bracket and positioning the arms. 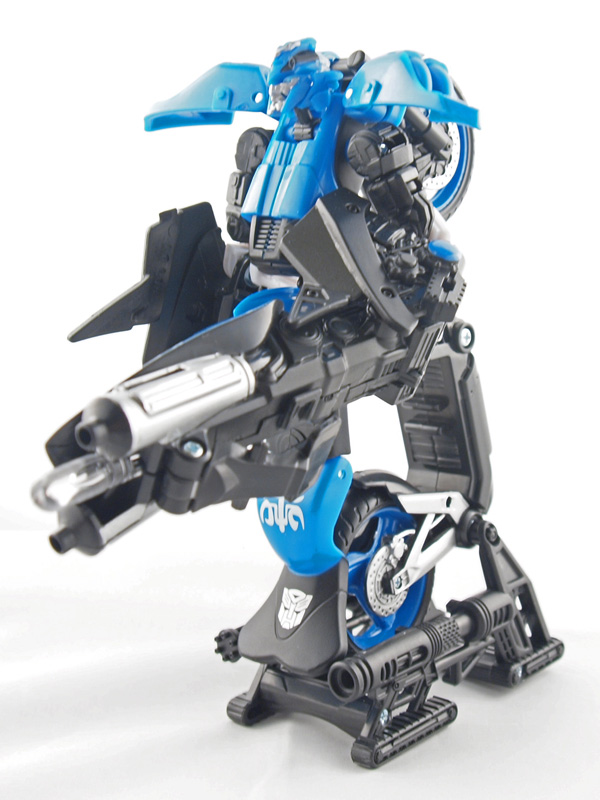 If you weren't a fan of Demolishor, there's a chance you won't be a big fan of Chromia either. However, unlike Demolishor, Chromia does have some good points. For one, the bike stand also becomes a figure stand. So you don't need to use the arms as a balance, freeing them up for posing. That being said, you'll have to get used to the asymmetrics. The left arm, which houses a launchable clear missile, is enormous. This arm also has the Mech Alive gimmick. The box says spinning gears, but all I could see was a sliding panel of molded gears. How cheesy. 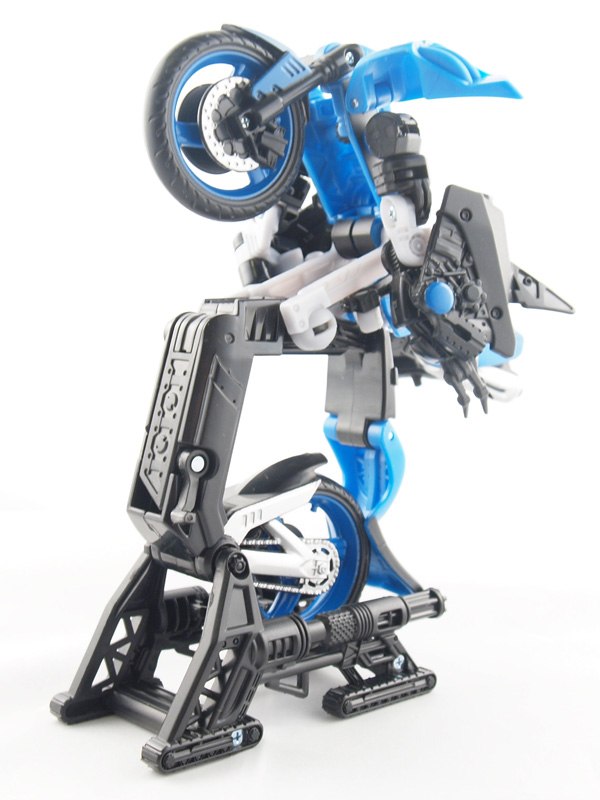 The other major gripe with this figure is that the peg system holding the 2 chest halves together isn't very strong. More than likely, you'll be spending time realigning the chest halves after making adjustments to the arms. It's annoying to say the least, but understandable due to the weight of the left arm. As far as the rumored combiner mode, the instruction sheet leaves absolutely no clue about it. More than likely, the combiner mode will be detailed on the final of the three sisters, should there be one. 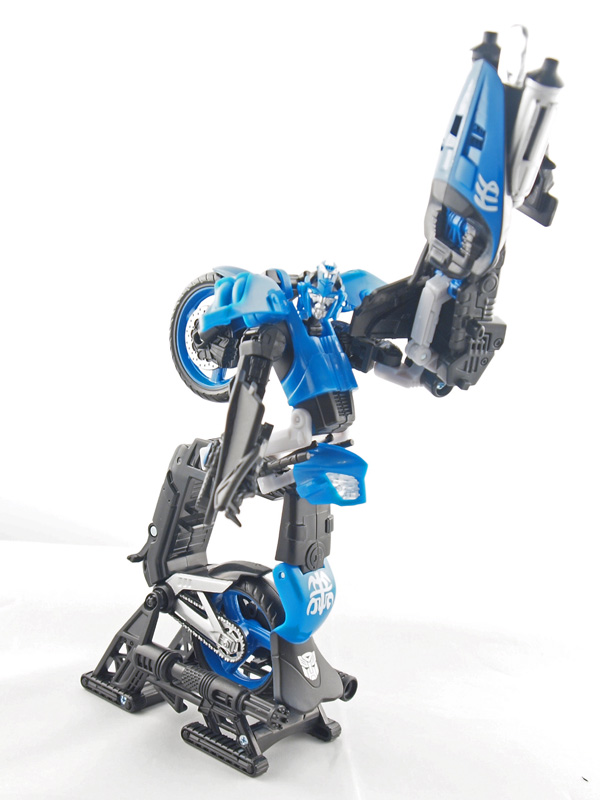 
The arms have great flexibility... once you keep the chest in place.

Excellent detailing, but some parts are fragile
Robot Mode:

Another instance of a movie character not making a brilliant figure. However, there's enough good in the robot mode, and almost no bad in the bike mode, to consider it for purchase.