The Fallen first appeared in Dreamwave's War Within series as a figure who appeared as mysteriously as Optimus Prime and Megatron disappeared. As the story progressed, it looked as though he was a herald of Unicron. Although denying it originally, it looks like the upcoming movie will have a Fallen of it's own. It's not clear what exact role he'll play in this movie, but for now we can bask in the glory of the figure.

For millennia, he has waited. Thousands of years have dragged by as he recruited proxies, one by one, to scour the cosmos for the artifact he required. Now he finds he must return to the primitive, flesh-slug infected planet on which his quest began. Nothing will stand in his way this time. If need be, he will scour the surface of the disgusting world clean in the fire of his rage, and search through the blasted rubble for that which he seeks 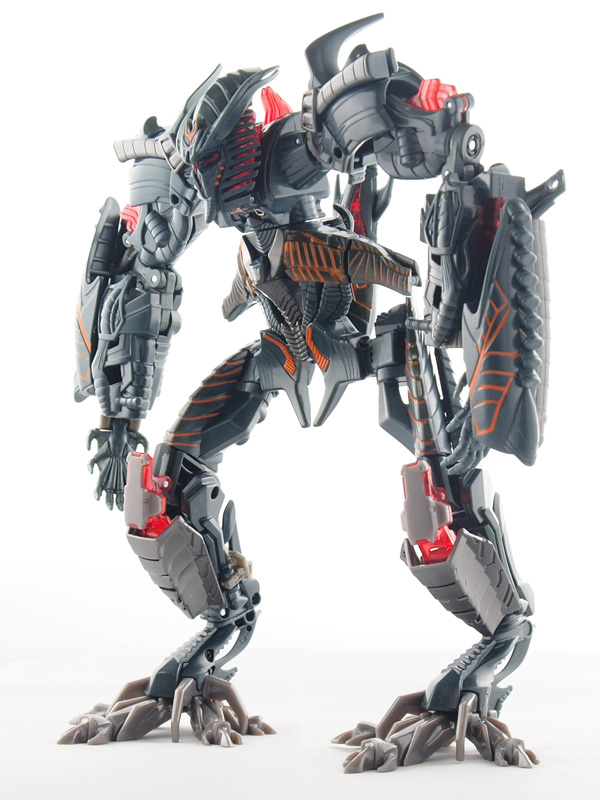 In robot mode, The Fallen looks like he belongs in The Predator. His entire appearance screams reptilian, with the dark green and orange accents. The head sculpt is fascinating to look at. You would think that the eyes are piped for red, but they're not. The feet are curiously spring loaded, meaning they'll collapse if lifted off the ground. However, once on the ground with the feet spread, he is pretty stable. 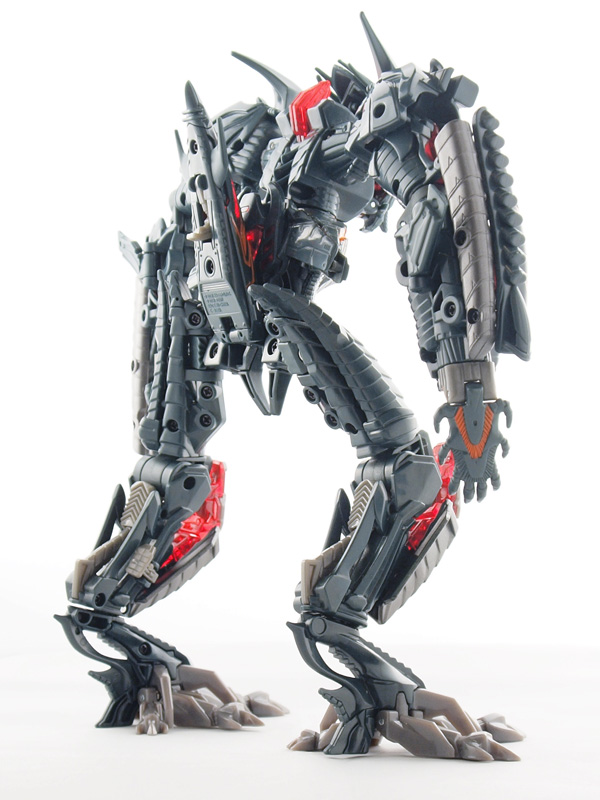 The Mech Alive gimmick for The Fallen are energy absorption panels. Tilt the head forward and two panels will pop out from behind. You'll also notice from red translucent panels built into his upper arms that can be thumbed up. If that wasn't enough, his shin armor also moves when you bend his knees. This is my personal opinion, but the Mech Alive hype is pretty much just that. It might have been a big pain in the ass, but the Automorph gimmick was a better one. 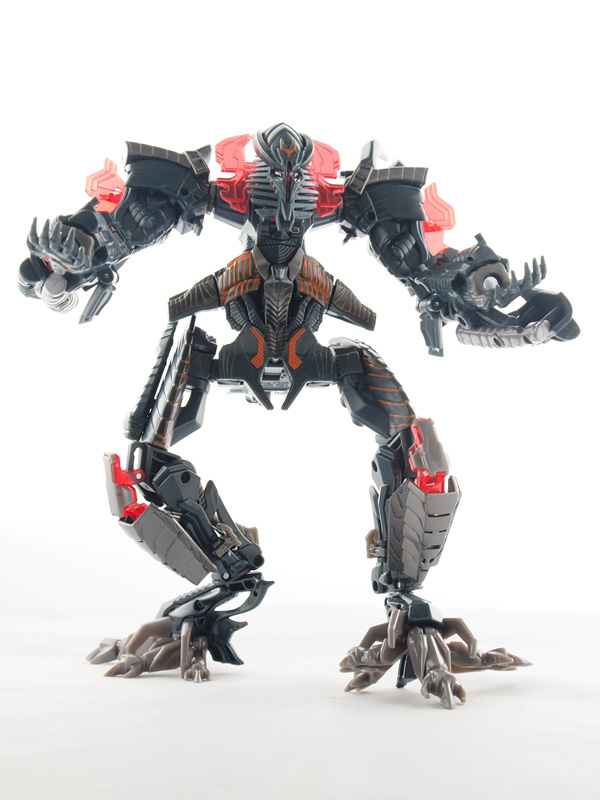 
Legs are somewhat limited by the marginal hip spread. The spring loaded feet also frustrate slightly when trying to restand the figure.

Fold down the nosecone attached on his back. Flip up the panel on his back so it stands straight horizontal, rotate the waist 180 degrees, then fold up the back panel so the red visor (cockpit) covers his head. Take the armor on his forearms and half-moon it forward towards the hands. Rotate the shins 180 degrees. Fold back the spikes on his shoulders. Pull the arms until they're straight up above his head. You'll note that there are 2 pieces of armor on his abdomen that are on hinges. Fold those up.

You'll note a pin sticking out on the back of his forearm and a pin hole on his shoulder. Bend the elbows 180 degrees in such a way that the pin on the forearm slips into the hole in his shoulder. Fold the hips out 90 degreesRotate the legs forward about 150 degrees. Rotate the lower legs again so that the leg armor faces inside. Rotate the feet so that the toes are on the outside. 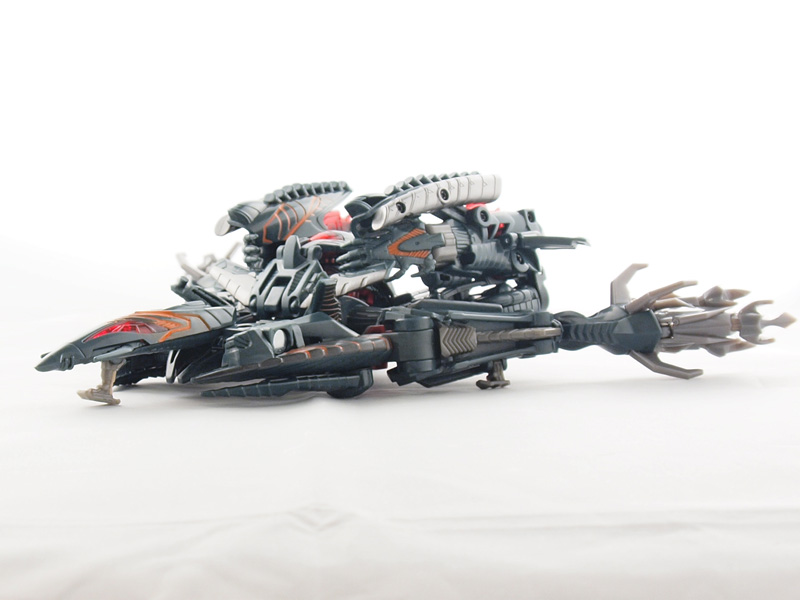 The Fallen's Cybertronian Destroyer mode looks like... well... a folded up robot. It certainly has a very alien aspect to it, again keeping with the bug-like appearance. Instead of landing wheels, there are 3 landing sleds. One is on the nosecone. The other two can be found under the wings/legs and they flip down. 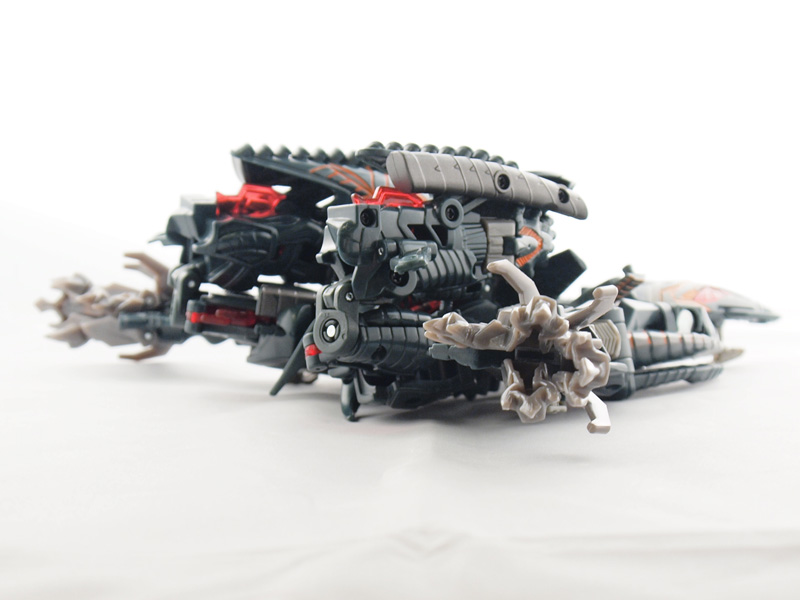 I think this is going to be another instance where the movie design was just too complicated for a figure. There are gaps abound, and although it holds together fairly well it just screams unstable.If they did a better job of filling in gaps, such as the HUGE gap between the nosecone and the cockpit, the aesthetics would have came out alot better.

Creepy looking robot, but just doesn't have that Transformers feel to it.
Alt Mode:

Too many gaps kills the look
Overall: