When people first saw Sideways, there was a lot of assumption that this would be the new Barricade. However, that's not going to be the case. For one, this bot seems way too cowardly to pull that off.

Back on Cybertron, Sideways was a simple courier who avoided combat at all costs. he tried to always remain in the shadow of larger Decepticons, where the Autobots might not notice him. On Earth, he's keeping much the same practice. He teamed up with Demolisher early on, and hopes that if the Autobots find him, the big Constructicon can keep him safe. 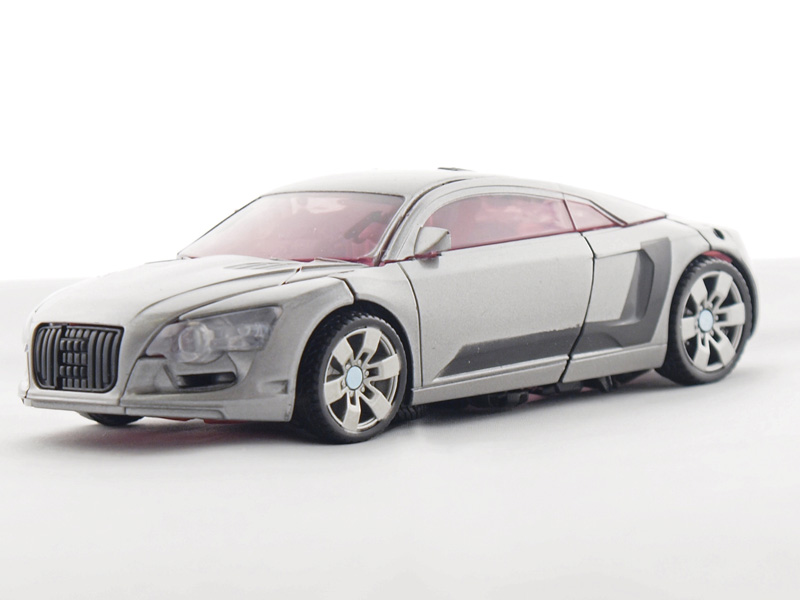 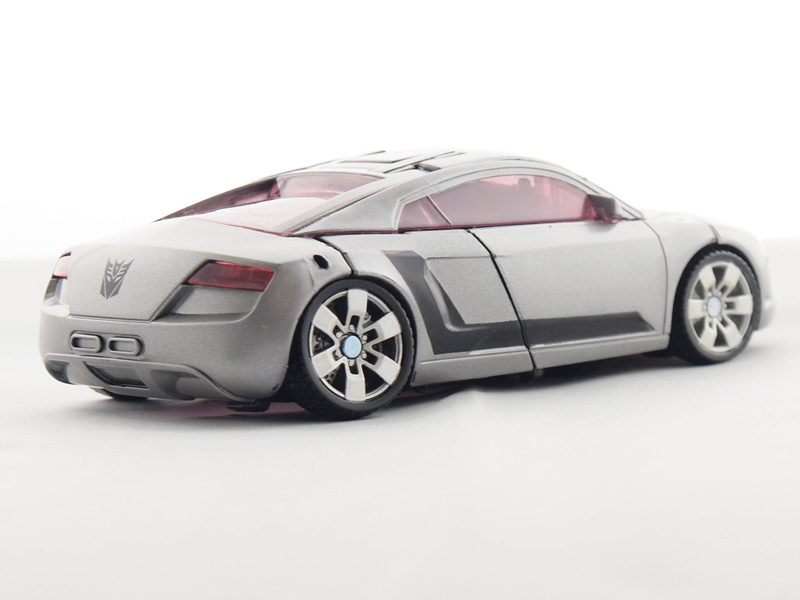 Changes to this silver bodied car versus the R8 include reworked headlights, a revised rear end, complete with center mounted exhaust and a slightly revised grille. You'll notice a black effect stripe that leads neatly into the intake ports on the quarterpanels. You'll also notice the rear glass is etched with detailing for an engine block, a clever touch.

Traces of Automorph exist in ROTF figures. Pushing in the grille will both pop out a red chest panel AND flip in the front wheels. Pull both headlights out from the hood. Grab the doors and pop them loose from the quarterpanels, then swing the arms out. Pop the quarterpanels loose from the rear deck to expose the legs. Fold up the roof, then fold the rear end against the inside of the roof.

Flip the legs out 180 degrees, then bend the knees on a double joint (think like a chicken). Turn the quarter panel on his leg so the wheel is on the bottom, then rotate the whole assembly so it's on the inside of his leg. There is a peg on the inside of the quarterpanel that inserts into a hole inside his shin, which should make leg alignment unquestionable. Fold out his forearms. Flip the front end forward. There is a tab above his waist which clicks into the chest piece. Flip the black tab over behind the hood to show his head. Align arms and door panels to complete the process.

Finally (no offense to anyone) but if you're gonna whine about how this figure is transformed like you did in the image gallery thread, do yourself a favor. Read the instructions and check the official pic on the back of the card. You know who you are. If you have a different method for transforming him that you like, that's perfectly acceptable. I go by the official modes. 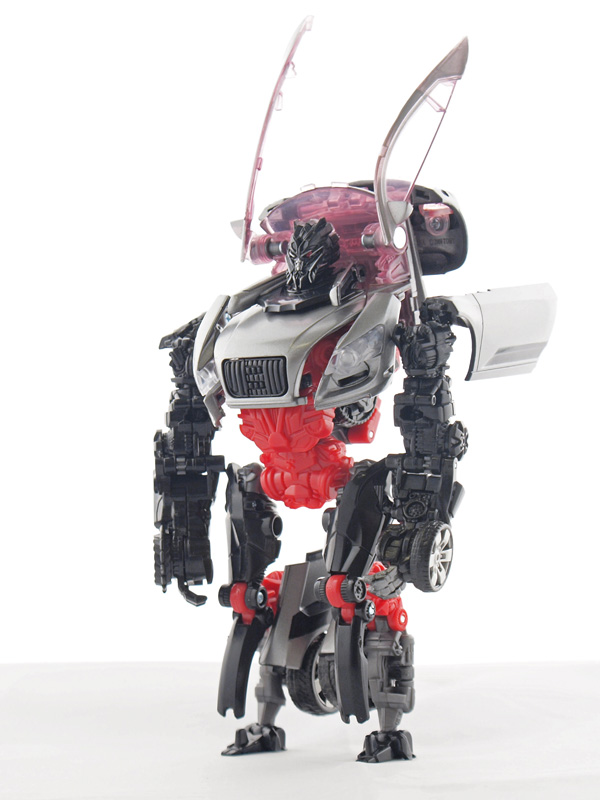 There was some concern about the brightness of his red chest after the first pics were shown. While it's still a stark contrast, it's not as bad in person. The figure shows alot of black in the limbs and head, and red in the chest and knees. The head is nicely detailed. The piping is unique, in that the eyes are translucent red, but the piping is clear. It gives off almost a magenta type glow. 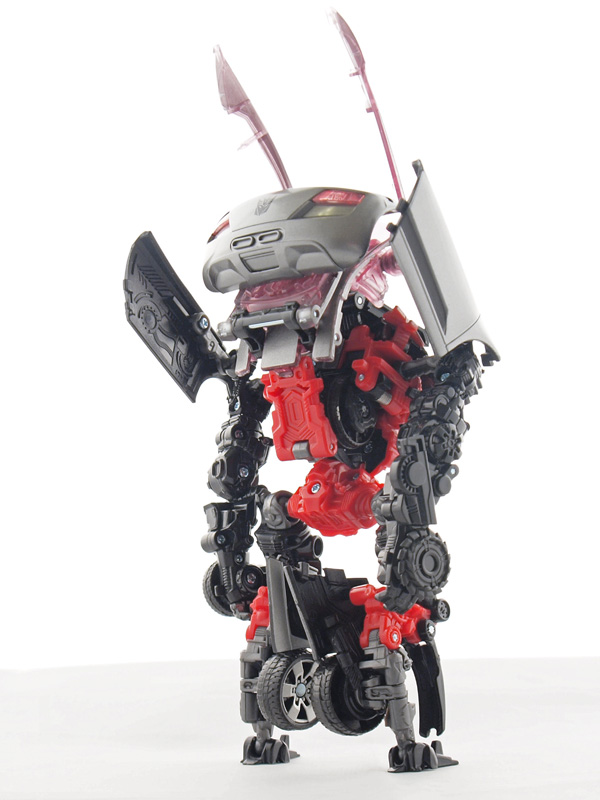 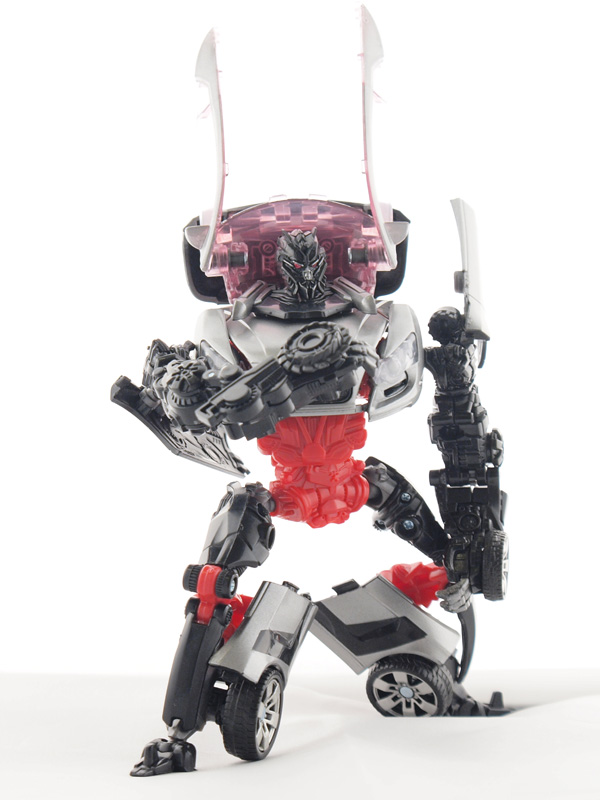 
The footprint is very small, so you might have to work a bit to get a pose down. You can cheat and unsnap the panels from the shins. Knees are a bit restricted, but again unsnapping the shin panels helps.

A very nice figure overall. Maybe toning down the chest and giving him a larger standing base would have made this a no-brainer.