We've previously taken a look at one Constructicon and the results weren't terribly good. However, one bad apple doesn't necessarily spoil the whole barrel. Our next target for Constructicon reviews is Rampage, a venerable killing machine.

The stink of diesel fumes and hot tar follows Rampage wherever he goes. his treads are packed with metal shards stripped from his victims, and the countless scratches covering his chassis are testament to the hundreds of brutal battles. He lives to pound his enemies into submission, and thinks of little else. His idea of beauty is the sight of sun glinting off the raw edges of shredded Autobot armor. 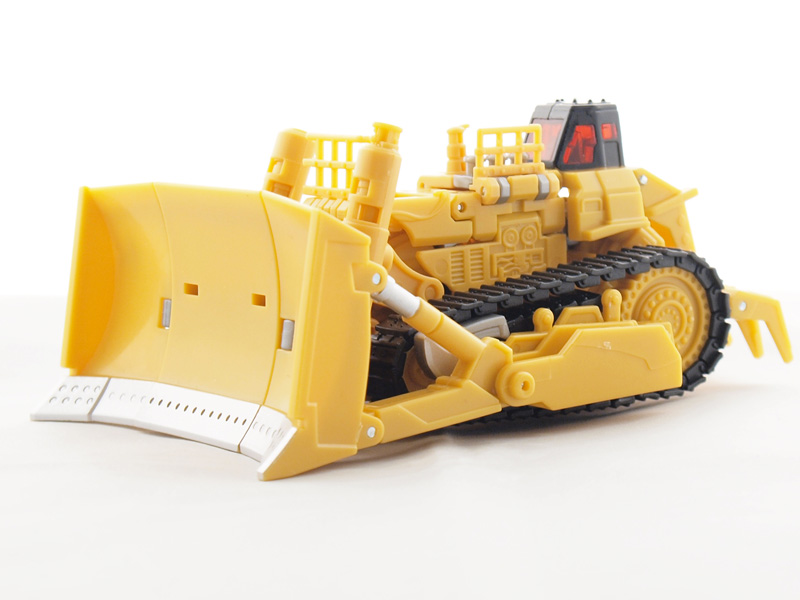 Rampage takes his alt mode after the Caterpillar D11T Track Type Tractor Bulldozer. Unlike Demolisher, Rampage blends in a bit better with his construction yellow paint job. The treads are rubberized but are static, so they don't roll. No worries, though, as there are 4 molded rollers on the belly that will help it glide along. 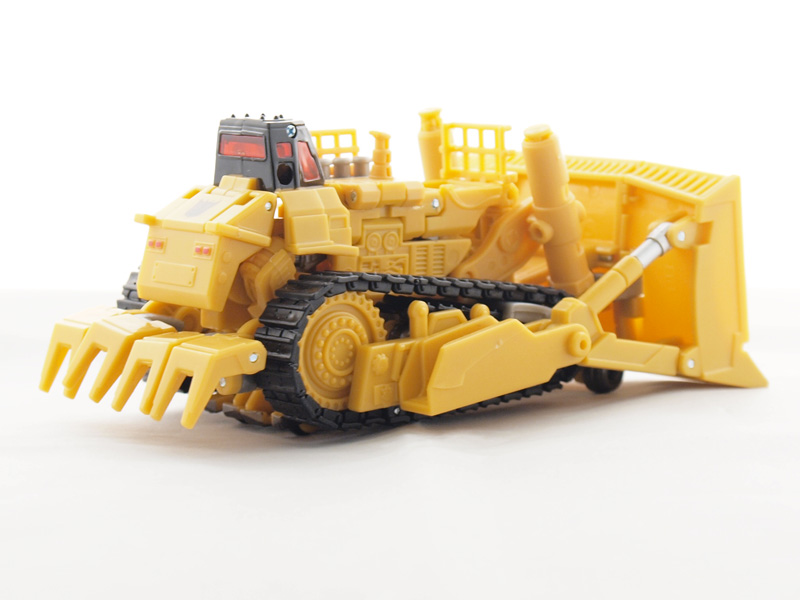 Another thing that doesn't move much is the plow, which only has some slight lift to it. Overall, however, it has a very uncanny resemblance to the real deal. On the back, you'll note the earth rippers. Each pair of claws move independently, which adds a sense of realism to it. Of course, that independent movement helps later on.

Begin by dislodging the panels on the treads, which frees up the plow. Flip out the exhaust ports (in front of the cockpit). Pull up on the back end until both it and the cockpit fold up where the exhaust ports were. Take the inner claws and fold them so they sit opposite of the outer claws. Dislodge the feet and flip them out so they are in line along the back of the dozer. Pull up slightly on each tread so it sits diagonally.

Just behind the first tread pulley, where there is an exposed screw, you will be able to take apart the treads. Once the treads are loose, fold the front pulley down and around. Position the hinges on the plow so that the panels lay flat on his back. The plow folds in 3 and the outer edges collapes inward and back to join up. There are two slots on the plow that match up to pegs on his back to keep it secure. Position the pistons so that the dual tabs are on the waist and the pistons are at his head. You will also notice 2 slots above the knees. The dual tabs snap into place there. Finish up by positioning the plow arms to stabilize him. 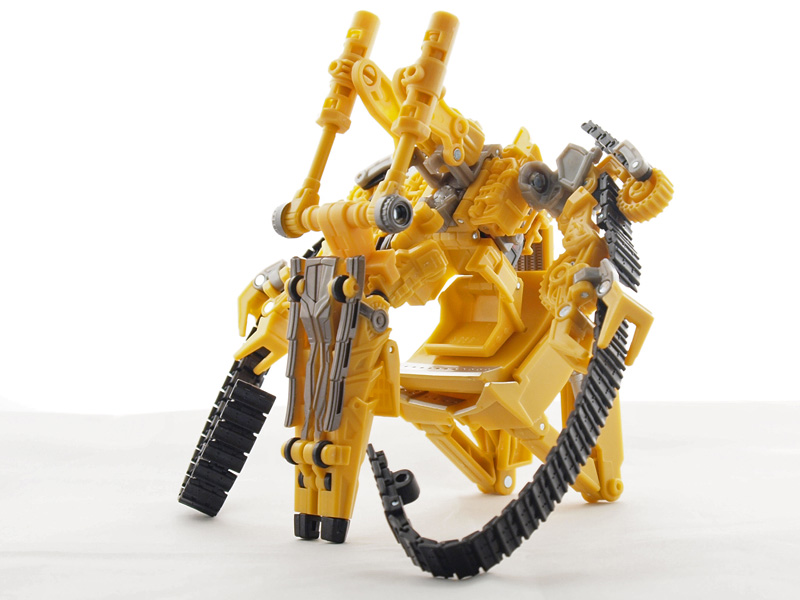 This is actually a sort of mid-transformation. His legs are spring loaded, so you can push down on him and he'll pop right back up once force is taken off. You'll also note that the pistons alongside his head will move up and down based on leg movement. The back end looks really garbled, but it's what keeps the jackhammer steady. One of the better quasi-transformations out there, as it does serve a purpose of sorts.

Remove the tabs from his legs. Manually push the pistons all the way up. You'll notice a rectangular slot on the piston piece, as well as a rectangular tab below his head. There's your chest hookup. Split the legs apart and flex them slightly outward. Spin the plow arm until the hooks face the bottom. This again stabilizes the figure. 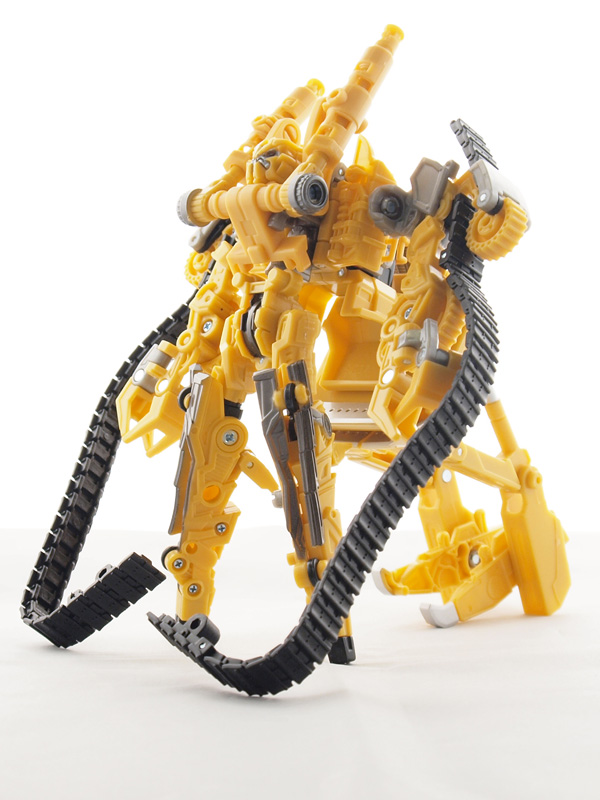 Now this is a pretty mean setup for a Constructicon. There is a lot more silver to accent the yellow. Although there are no feet persay, the back end (as kibbled as it might looks) serves purpose to keep the figure stable. The treads hanging off his arms serve as effective whips. You can even have his claws hold the whips for a little more control. The head is piped red. 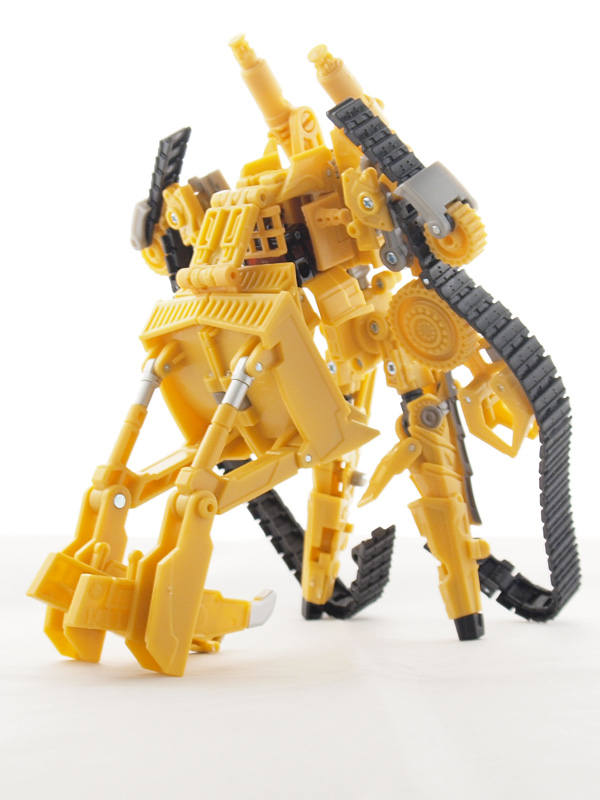 I've noticed this guy cluttering shelves anywhere I go recently, and after figuring him out for awhile, it's a shame. Sure, the transformation is a bit tricky and the plow keeps wanting to disconnect. The back end kibble looks kinda goofy, too. But the figure does grow on you. Has there ever been another Transformer with whips on his arms? 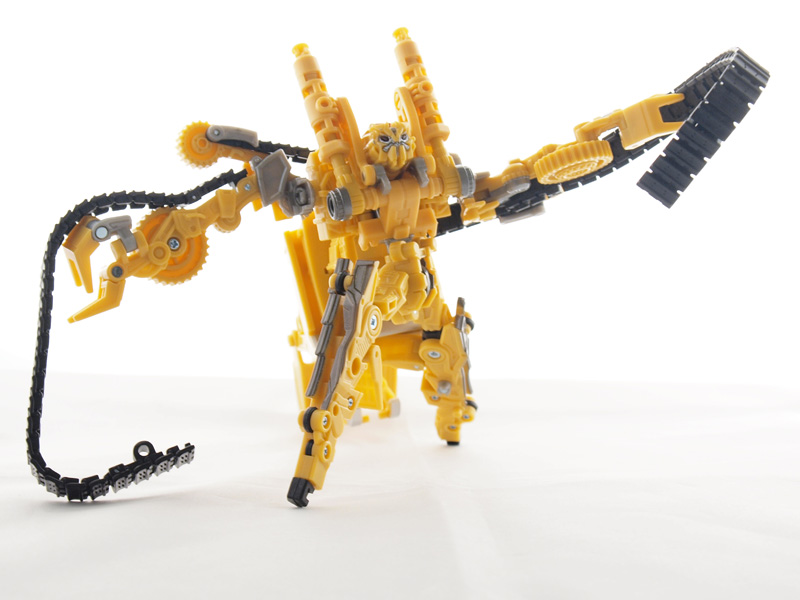 Another realistic alt mode. Lack of plow movement is the only downside.
Jackhammer Mode:

Inventive use of a mid-transform.
Robot Mode:

No elbows and spring loading make Rampage limited on some poses.
Overall:

Proof that different can sometimes be good.