It seems whenever you bring up the name Wheelie, there's hardly anything good to say. The G1 Season 3 character tried to be cool and hip... and failed at both. Since that time, majority of fans wish for his death or use him for the constant butt of jokes. Wheelie returns to us for Revenge of the Fallen. Will he gain respect in this movie? Or be forever scorned to ridicule? This review will settle the toy part of that question.

Autobot Wheelie never really wanted to be a Decepticon. It's just that, when people start yelling at him, he tends to do whatever they say. He's easily startled, and simple to scare. his tiny size makes him an ideal spy, and even though he doesn't like or agree with the Decepticons, they scare him so much he doesn't know what to do except obey. 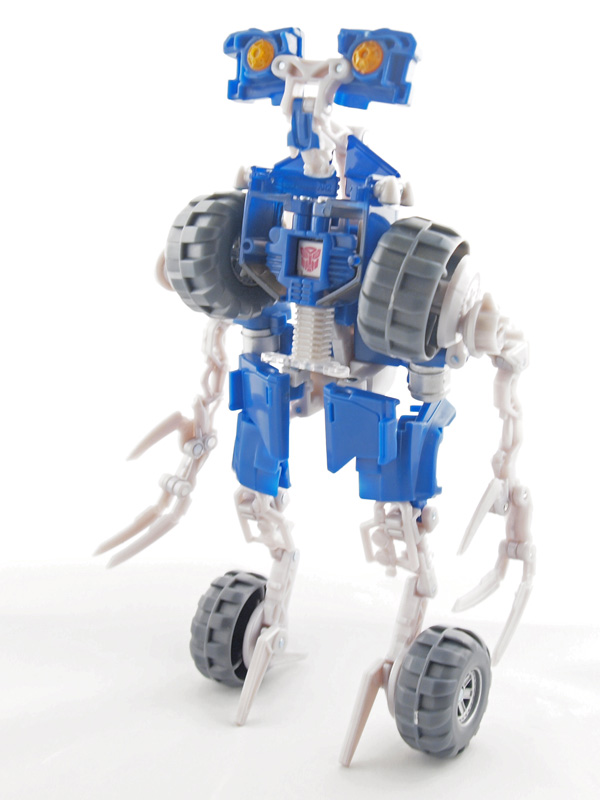 Wheelie is certainly an odd looker. The body is primarily blue, with the limbs being PVC gray. The head certainly takes some getting used to. First time I saw it, the first word that came to my head is "dinkus". The eyes are painted yellow, but not piped. Speaking of the eyes, you can move the angle of the eyes to portray different emotions. 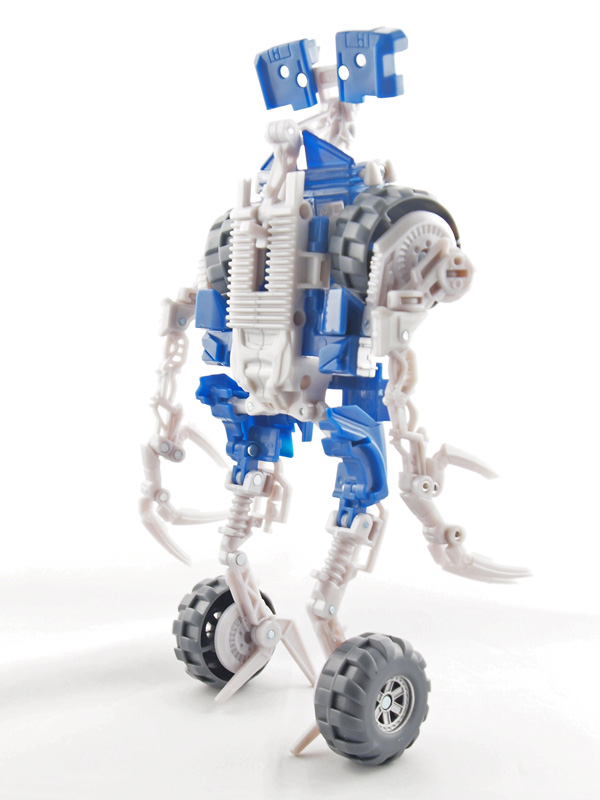 Just looking at the figure gives me thoughts that this is one size class too large. Did Wheelie really need a deluxe? You would think that with the wheeled feet and the small stalk (toe) being the sole balance point that he would be unstable. Surprisingly, he's not... so long as you can keep that toe in check. The Mech Alive gimmick this time? You can change his chest insignia between Autobot and Decepticon by moving a handle on his waist. 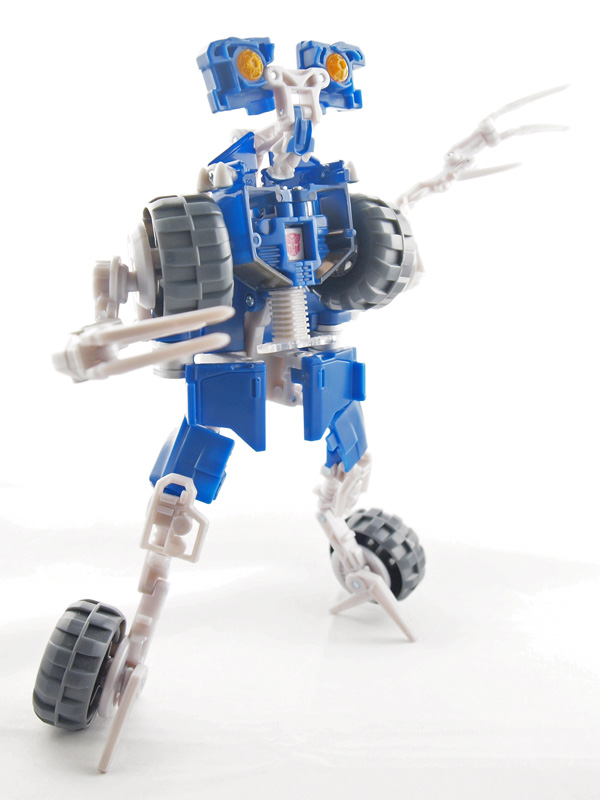 
As goofy as he looks, he has some decent poseability. The articulated fingers are a plus. Too bad about lack of shoulder spread.

Peel back the arms so the tires face forward. Pull the head completely up. Pull the chest down half moon until it's between his legs. Fold the 2 halves of the chest to form his cab. Rotate the shoulders 180 degrees, then finish folding the wheels back to form the bed. If done right, the shoulders should lock together via a tab and a peg. Fold in the eyes and pull the mandible up, then fold in the head so it forms the tailgate.

Fold the toe back completely in. Fold in the waist area to form the doors. This will allow you to center the cab in place. Fold the knees until the grille work is exposed. Line up the thighs so that the clear plastic piece slips behind the grille. Spin the knees guards and align them to form the brush bar. Finish by folding in the lower legs. 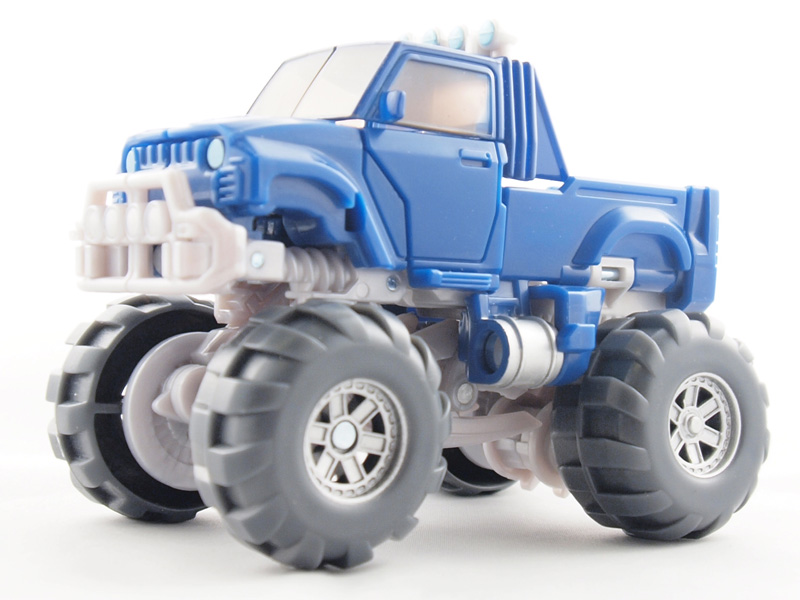 His alt mode is an remote controlled pickup truck. The look overall isn't bad. However, you get that feeling again that this should have been a Scout class figure. The details are decent, which include Hella type lights on the bed bar and brush bar and cab doors. 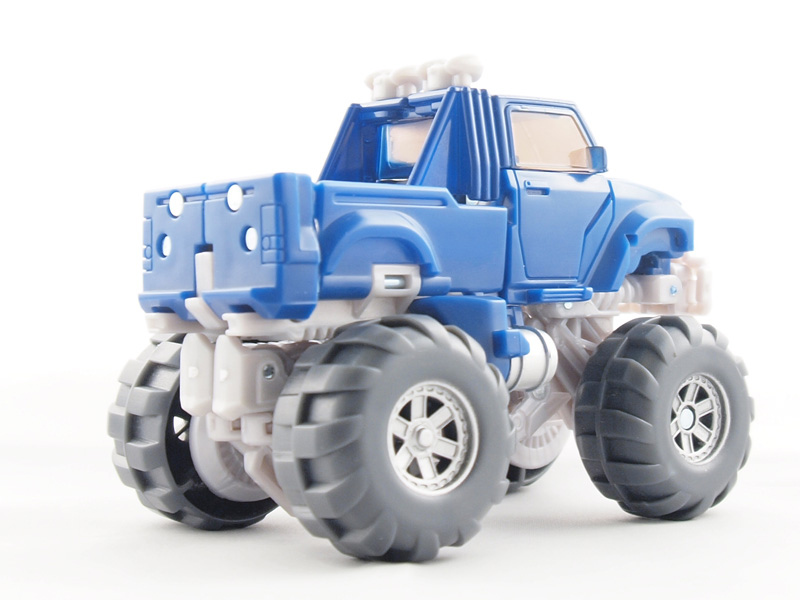 One thing I will ALWAYS score down for is for an exposed head in alt mode. To me, that defeats the whole purpose of "robots in disguise" The head is exposed in the pickup bed. No tonneau/shield? Also, there are uneven gaps where the cab meet the bed. Overall, the alt mode tends to look somewhat clumsy.

Exposed head, too many gaps in the body work.
Overall:

Should have been a scout, if he had to be released at all.