Stratosphere - Revenge of the Fallen - Figure 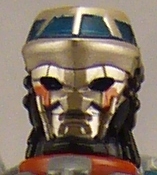 For obvious reasons Stratosphere’s name keeps invoking one of my favorite Masters of the Universe characters Stratos. Fortunately this gray winged RotF toy does justice to the fond memories I have of He-Man’s flying Avian friend.

“When the Autobots need to be delivered to the front lines fast, they rely on Stratosphere. His cargo bay has enough room for an entire Autobot strike team, and his engines have enough power to get them all the way to the other side of the world in only a couple of hours. High altitude weapons allow him to deliver a punishing barrage against Decepticon targets on the ground as his comrades move in for the finish.”

Stratosphere’s plane mode is his reason for being. Like several vehicles from the first movie, Stratosphere’s alt mode is a regular non-transforming human vehicle in the movie (unless someone knows something about Revenge of the Fallen that most of us don’t).

I’m not sure what real life plane he is meant to be, but he bears a resemblance to modified Boeing 747.s N.A.S.A uses to transport Space Shuttles. This led some to speculate that he would come or be compatible with a Space Shuttle Transformer.

To the reviewers understanding at the time of writing, N.E.S.T. Deploys Transformers, Optimus Prime in particular, from a similar airborne transport several times during Revenge of the Fallen. Thus Stratosphere has a cargo bay that opens out of his rear when the tail wings are tilted down which accommodates the miniature Optimus Prime he comes with.

The plane mode itself is good looking. It’s hard to say what the rational for the orange on the engines is, unless Stratosphere is going through re-entry. The seams are in natural places, and over all it’s a good plane toy.

It has landing gear with rolling wheels. However the opening bay of five wheels of which only one is real. The other four would be a fine detail but they are un-painted and look awkward. With out the paint, the plane would look better with just the functional wheels.

Stratosphere’s transformation is fairly simple and intuitive. Like other RotF toys I’ve examined, Stratosphere breaks in the front center of his alt mode and then folds back to re-attach and form the torso. Seems to be a theme.

This transformation seemed really easy, but after RotF Leader Optimus… Everything might seem easy.

The “Mech-Alive” gimmick of the chest opening as the arms unfurl seems more like an “Auto-Morph” function. It backs the theory that these gimmicks would be best skipped. Transformers have a gimmick. They Transform. 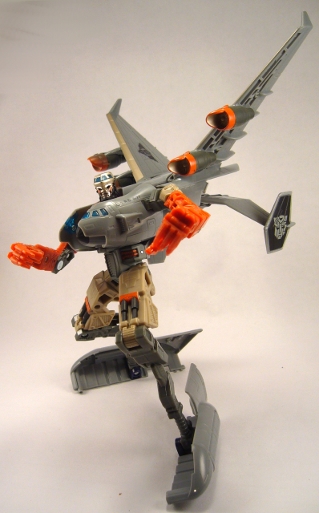 Overall Stratosphere is a good looking ‘bot. Despite chicken legs from head on he looks great. The main and tail wings frame the skinny figure nicely and better than average articulation give a wide range of play possibilities. Stratosphere is sturdy and play worthy, but still durable. 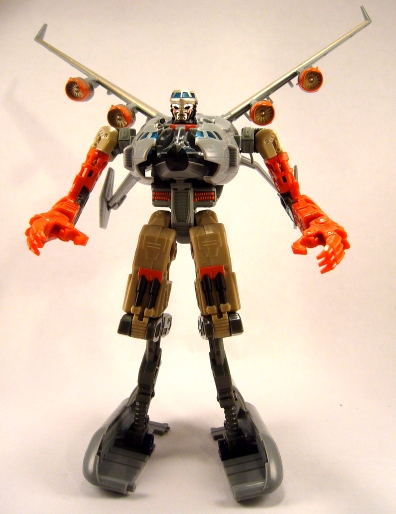 His intuitive and straight forward transformation eliminates the need for ball or break away joints, totally absent from the figure. He’s not going to come apart in your hands as you try to pose him. 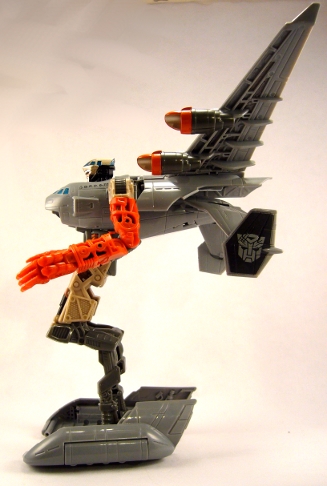 The big detractors here are the GIANT airplane backpack he’s got on and the clogs he wears to hold it up. They’re “friggin ‘Huge!” 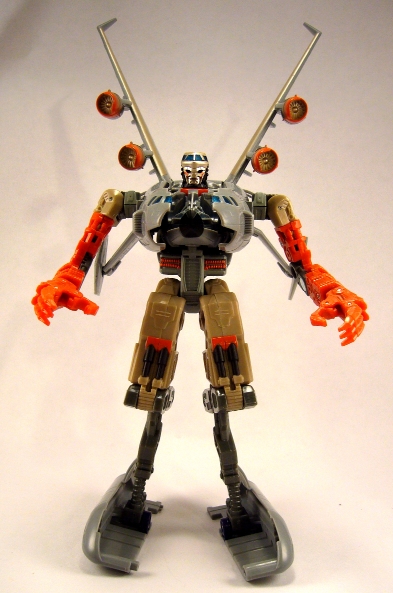 The excess plane parts stick nearly 5’ off the back and depending on the angle you choose to keep them, the wings can nearly double the height of the figure.

Those chicken legs aren’t there for no reason. They feed into feet with a base more than 3’ long. These size 12’s do the figure functional credit though, stability is not an issue here. However they do represent the aesthetically weakest part of the figure. They’re giant and hollow and visible. The plane backpack is more hidden from the front but those feet are right out there.

Stratosphere was designed to be fun to play with, and he is. These concerns are going to be more for display purposes than actual play. Stratosphere, is a solid figure with good articulation, lacking in a weakness of joint that many of his contemporaries suffer. Fun for kids, but collectors may wanna pass.

Possibly the smallest transforming movie Prime, this little guy gives the Worlds Smallest Transformers a run for their money. 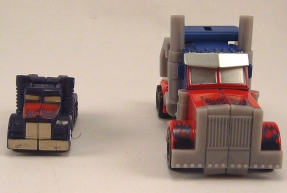 Pictured with LOC Prime for scale.

Unfortunately being small is about all this Prime offers.

Some paint might have done shorty wonders. The one splotch of red flamey paint isn’t enough. Like last movies LOC Prime there’s just too much dark blue here.

His transformation, like so many Primes, hearkens back to the old G1 classic stand by, here with the unfortunate result that the grill that forms the washboard abs of a snub nose Prime turns out as a prodigious beer gut on this petite prime.

As long as you stow his feet properly during transformation, (not shown well in the instructions) he rolls nicely in and out of Stratosphere. 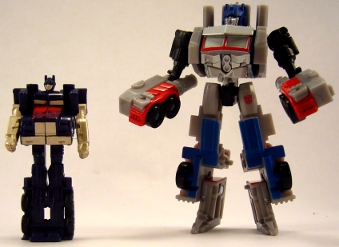 Pictured with LOC Prime for scale.

This Prime exists mostly for function, and dispite not being much to look at, he fills that role well. For some the fact that Stratosphere poops out this little guy will be the principal reason to buy him. 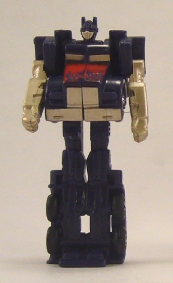 Honestly, I love the little guy, but I’d be lying if I said he was anything but slag.

"People thought I was Silverbolt?! More like Superion, glitch!” 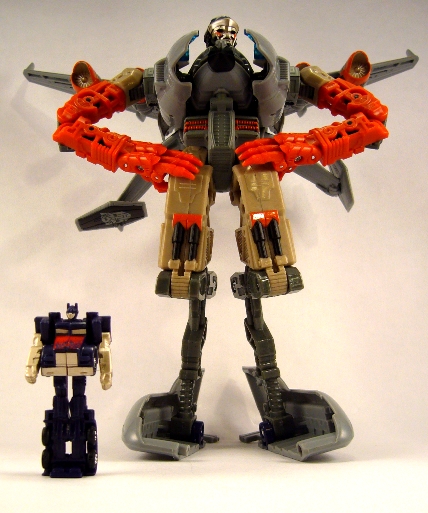 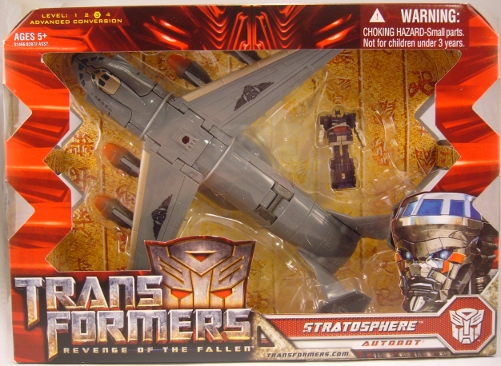 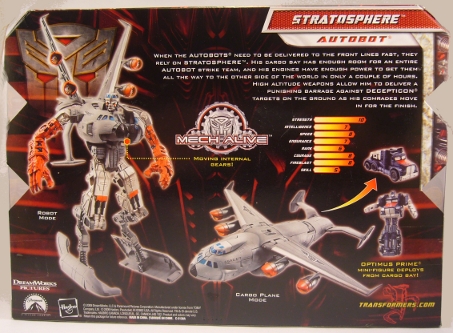