Combiners and fembots and twins, oh my. The upcoming movie is certainly throwing out a lot more concepts this time around. One of those concepts are of twins, referring to Autobots Skids and Mudflap. This review will look at the "more mature" brother, Skids.

Because he is slightly less hyperactive than his brother Mudflap, Autobot Skids has always thought of himself as "the smarter one". He likes to point this out at every opportunity. While Mudflap zips around like a maniac, Autobot Skids prefers to impress his superiors amongst the Autobot high command by behaving in a way he thinks of as mature, which usually involves talking nonstop about anything that occurs to him. 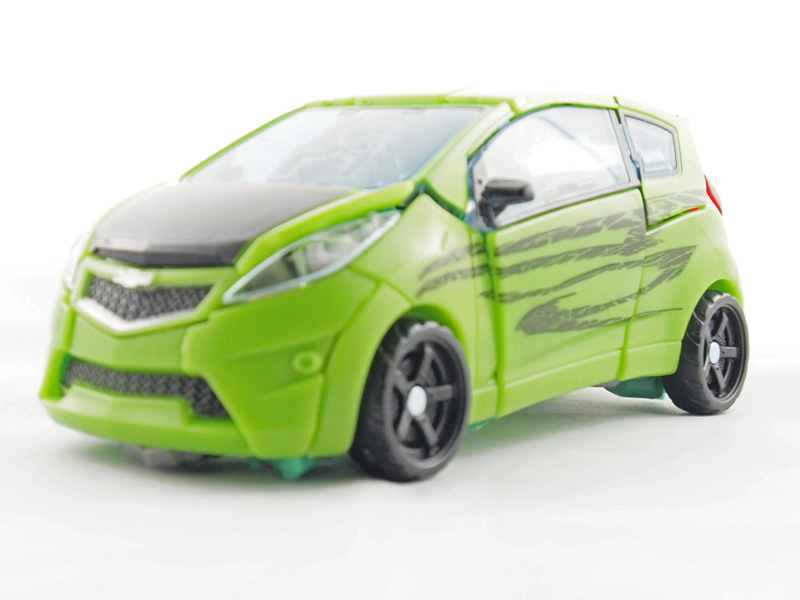 Skids is based off of the 2007 Chevrolet Beat concept, which will eventually become the 2011 Chevrolet Spark minicar. Skids uses a slightly darker green than the concept car, and adds black splash effects to the side panels. The hood is blacked out, as are the wheels. You will note SKIDS on the license plate. Details include a meshed grill, front air dam, rear air dam and rear hatch spoiler. 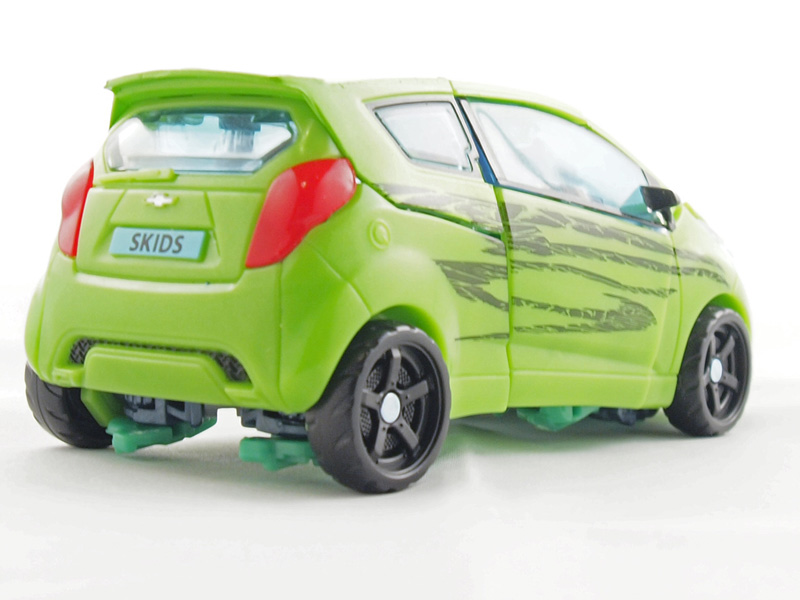 The car is pretty nice for a compact. Too bad the same can't be said for the seams. The doors are almost impossible to line up with the rest of the car, always sticking out ever so slightly. The A pillars also seem to have a separated look from the front panels. While I do realize that there's a lot of robot to stuff in a tiny package, they could have done a little better. Same goes for the slightly different shade of green on the roof panels.

Separate the front panels and doors from the rest of the car and rotate them down 90 degrees. Pull down the legs and flip out the feet. Fold the door windows into the panels, then wrap the doors around the lower legs, connecting the hole inside the door panel to the peg inside his leg. Pull out both rear fenders, then slightly pull them forward. Fold the hood into the windshield.

It might take some force, but collapse the center roof panel's back into the cockpit while pulling the windshield up above the roofline. Rotate the arms so the fists point back but the wheels stay in position. Point the rear end straight up. You should then be able to rotate it 180 degrees. Flip out the head, rest the front end against the spine of the rear end and rotate the arms down. Connect a tab on the hatchback to the notch just behind his head. Align arms and shoulder panels to round things off. 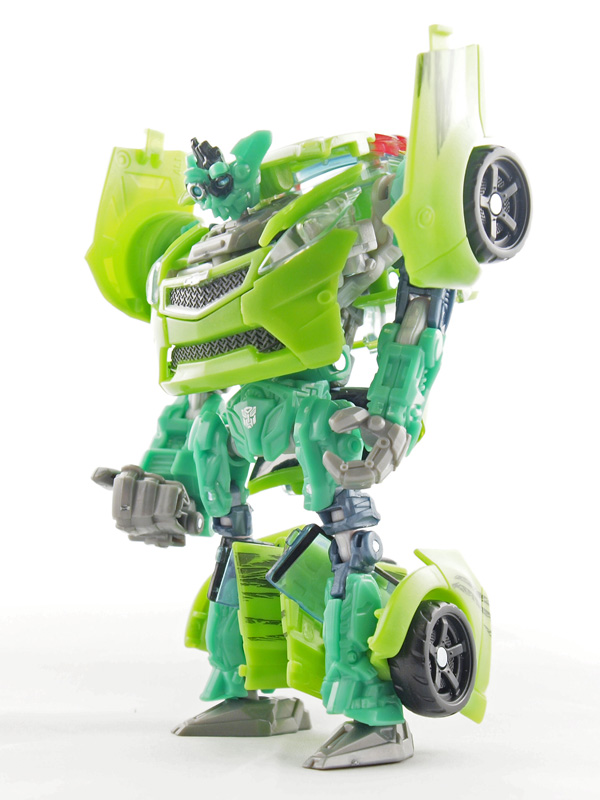 He's quite the interesting bot. Darker shades of green appear on his limbs, ass well as some gray. You'll notice that his right arm is larger than the left. This incorporates one of the Mech Alive features. Now, everyone talks about the head mold for this one. It's definitely a bit goofy looking, although not quite as bad as I initially thought. The eyes are piped clear. 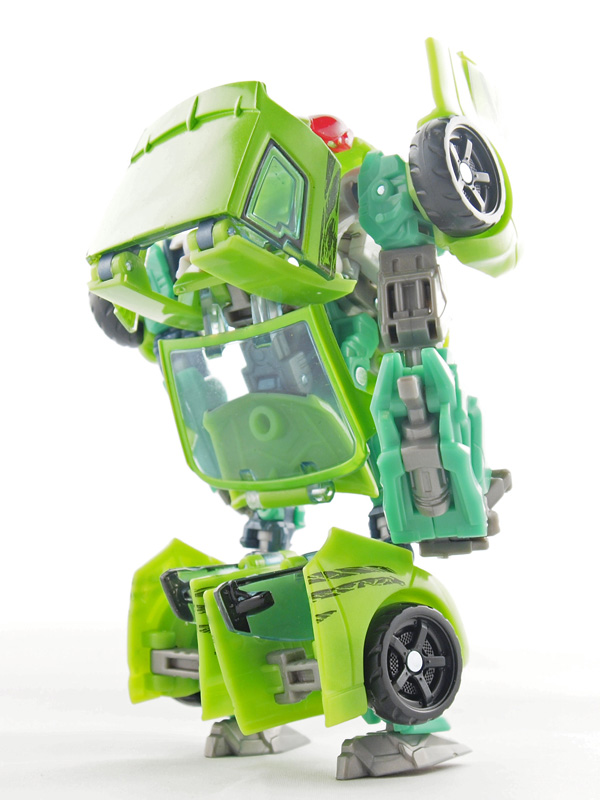 For the first Mech Alive gimmick, let's go back to that right arm. There is a tab on his right elbow. Cocking that tab back actually does 2 things. First, it throws out the oversized fist in a robot punch move. Second, it exposes a semi-hidden cannon in his forearm. Not a bad 2-for-1 gimmick. The second Mech Alive gimmick is in the chest. Pushing down on the grille expands panels on his chest outline and bobs his head down. Interesting, but a much better use of the Mech Alive "technology" that is so boastful of this line. 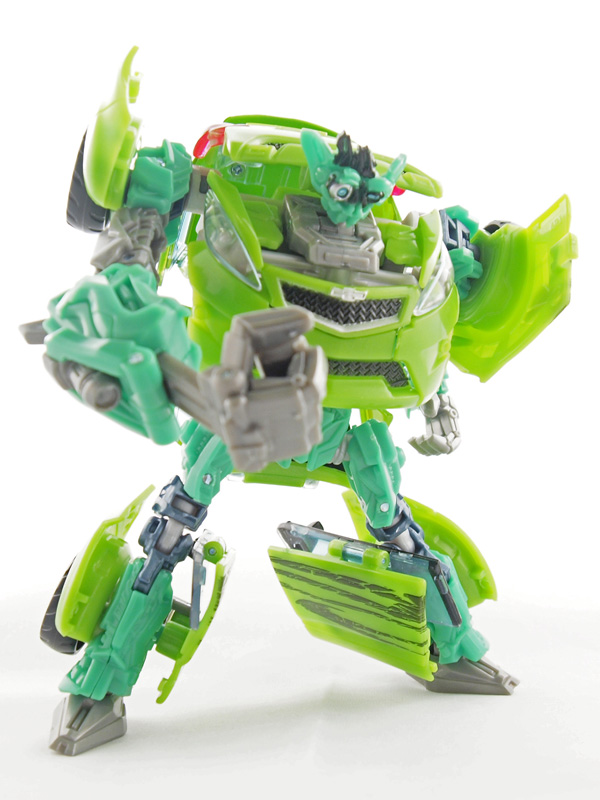 
There is kibble to contend with, mostly on the lower legs and back. However, he is quite flexible and allows for some good posing.

Too many gaps in the bodywork
Robot Mode:

Surprisingly a lot of figure for such a small package. Get past the head and the poor fit of the alt mode panels, and you have a winner.