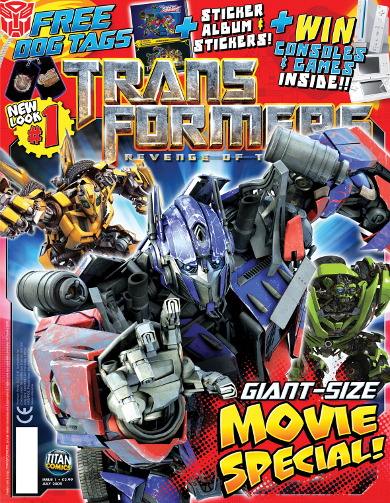 Titan’s last comic series wrapped up last issue with it’s own iteration of Megatron’s resurrection. Past parts of that story included a resurrected Jazz turned semi-evil bounty hunter and even Cybertron turning briefly into Unicron.

Such liberated stories seem to be behind the Titan Movieverse as we move now into a new era (and numbering system) for the Magazine, now dubbed Transformers: Revenge of the Fallen Magazine.

The opening act of this new era features a pre-earth jaunt with Mudflap and Skids, who one is tempted to call the “Hatchbo-Twins” on account of their flagrant theft of Sunstreaker and Sideswipe’s relationship. (A fact that if true in the film is bound to annoy fans of the Lambo-twins, left with out a Sunstreaker). In this story entitled Training Day, the two rookie Autobots are assigned to train under Denzel Washington, a bad cop who… 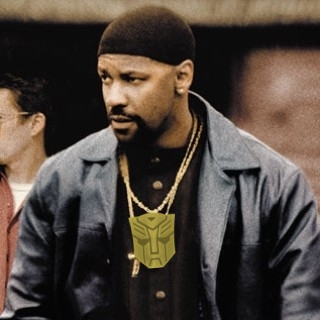 Seems like it should have been called “Training Millenium” any way. The Hatchbacks of Notre Dame apparently have been squatting on Cybertron for some time, alone, racing and running obstacle courses. Sounds like a concept for a Hot Wheels set, “Cybertron Mountain Challenge!” or maybe “Hatchback Attack!”.

This story seems to be a successor to IDW’s movie prequels Alliance and Defiance, as opposed to the previous Titan stories. It has the Fallen… monolith… looking thing talking to Starscream, and it seems unlikely that the Hatchbacks of Notre Dame didn’t notice Cybertron growing horns and trying to eat the Earth.

The dialog between the twins is fun, I hope it’s as good in the movie. The story is a little random, but it’s the first part we have to see where it’s going.

Jon Davis Hunt’s art is better here than it was in the Revenge of the Fallen Comic Adaptation. Between Starscream, Skids and Mudflap, that translates to he drew some seriously ugly characters very well.

Also, Check out these Movie-verse Lugnuts! 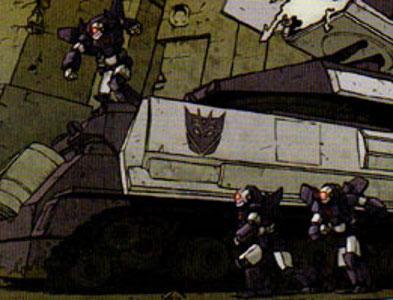 I’m looking forward to more of these. The UK series have by far been my favorite iterations of the Movie verse in any media so far.