Previously, we looked at Skids, one of two Autobot twins. In this review, we'll look at the other half of this duo with Mudflap. Both are conceptual Chevrolet vehicles. Both have faces that... umm... only their creator could like. However, they're also different in a lot of ways.

Young but eager, Mudflap has wanted to be a full-fledged warrior under the command of Optimus Prime. As long as he can remember, he and his twin brother Autobot Skids traveled for years to Earth, just in the hopes of joining up with their idols. being on Earth with Optimus Prime and the other heroes of the great war is a dream come true. 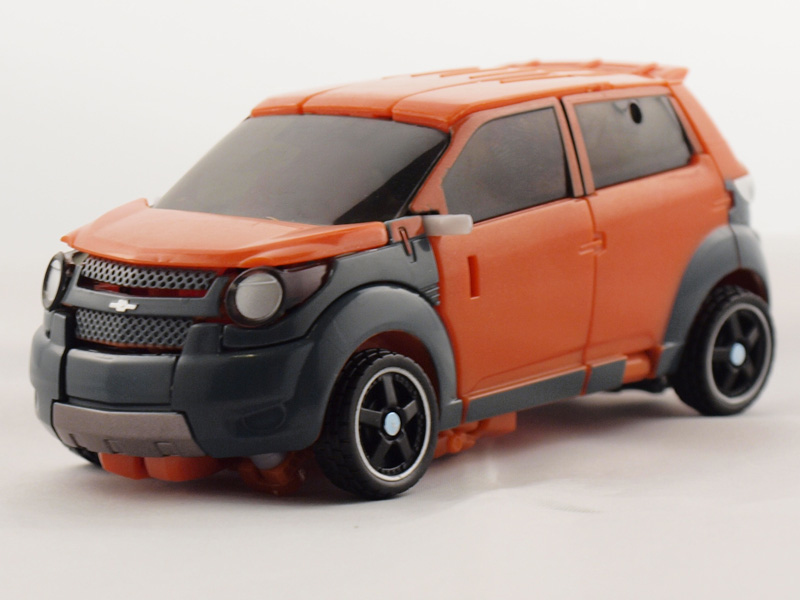 Mudflap is based off of the 2007 Chevrolet Trax concept, which is not slated for production. You have to wonder though, if response from the movie might change that stance. The 4 door mini-SUV has a Honda Element feel to it, with the mixture of dark gray and bronze paint apps. Unlike Skids, which had his name on the license plate, Mudflap advertises the car model on his. 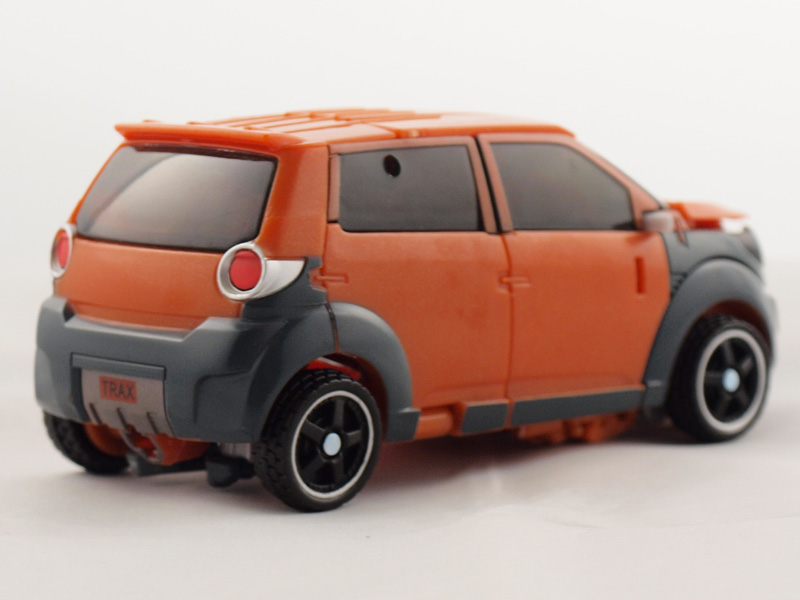 Details are slightly less apparent than with Skids. Some of the downers include exposed screws on the rear glass, as well as a hood that doesn't quite flush with the front fenders. From a front 3/4 perspective, the panels look misaligned even when everything looks right on. There is a missile holder built into the rear bumper. This also serves to keep his body in place later on.

In some ways, transforming Mudflap is a little like transforming Skids. Start by pulling the front wheels loose of the front end and rotating them downward. Rotate the fenders so the wheels point back up at the body, then fold out the feet. The remaining flank of the front fender attached to the grille fold outward. Flip out the rear wheels to expose the arms. Rotate the front end 180 degrees. Fold the hood into the windshield.

Rotate the doors so the handles point down. CAREFULLY work the windshield so it pops out ABOVE the roof panel. Push the back of the central roof panel in. The rear end will now fold into the windshield. There is a tab behind his head that goes into the crosshair slot. Align door panels and arms to finish. 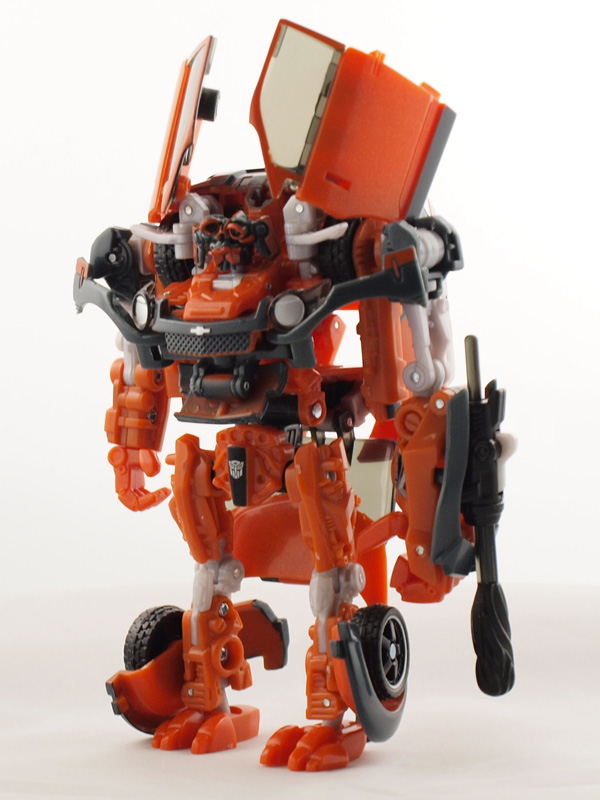 For some reason, Mudflap just does not have the same appeal as Skids did. Maybe it's teh bronze color, which looks more like a burnt orange in robot mode. Maybe it's the chest, which looks less filled in. Or maybe it's just that ugly, ugly head. Skids could win beauty pageants next to this guy. No piping for the eyes, either. 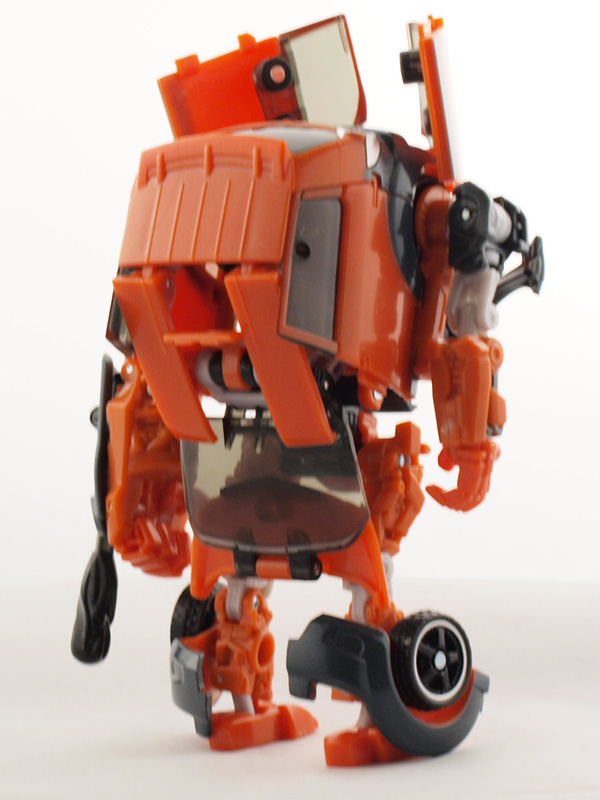 Like Skids, Mudflap has 2 Mech Alive gimmicks. Move in the fist of the oversized left arm and a hidden missile port pops out. You can then load the supplied missile in and fire at will. He also carries the same chest gimmick as Skids. Pushing down on the grille moves the headlights on his chest and bobs his head down. Another good use of Mech Alive gimmickry. 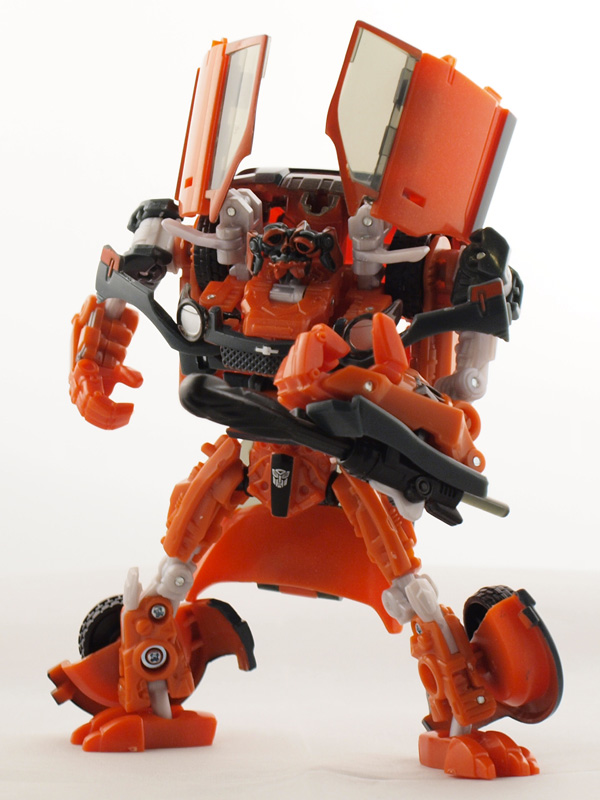 
The kibble is less likely to impede posing with this figure. Shoulder articulation is impressive.

Gaps in hood are a bit annoying
Robot Mode:

God save the face, but overall a decent bot with good posing moves.
Overall:

A slightly uglier twin that Skids, but with a different head and paint job he could have been a standout figure.