Looks like 2 Megatrons are better than one lately. The 2007 movie, TF: Animated and now Revenge of the Fallen have given us both Voyager and Leader class versions. This Voyager mold, however, is about night and day versus the Leader mold.

Trapped in the black, crushing depths of the sea, his mind inert in the grip of stasis lock, Megatron knew nothing of the desperate search mounted for his remains by the other Decepticons. When he was finally brought back online, their effort and sacrifice meant little to him. The only thing that had any meaning was revenge. He would have his vengence against the human boy who cheated him of his prize, and he swore to celebrate over the smoking wreck of Optimus Prime. 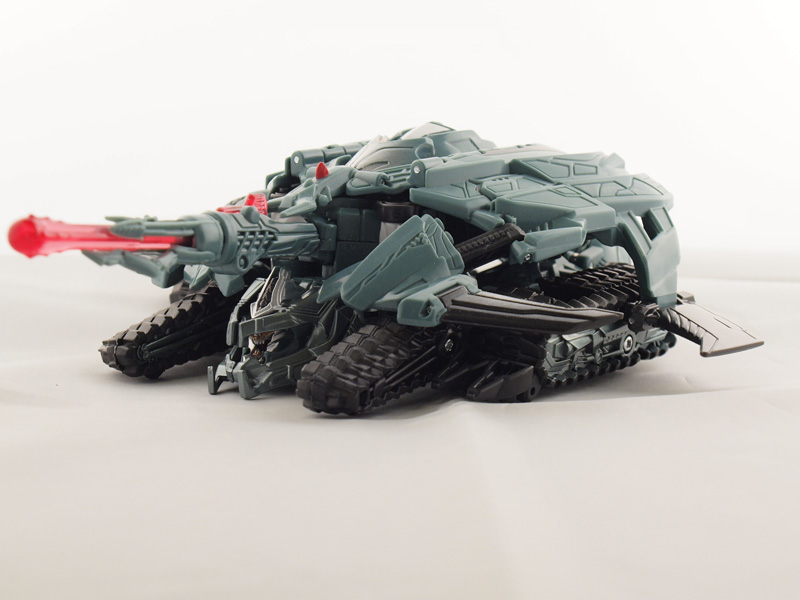 Megatron is still a Cybertronian tank, but you would think he got another reformat. Instead of silver, this version is more of a gunmetal gray. This version also sports 2 pairs of wings for a supposed flight mode. That might explain the large turbines on the leader class figure, which are mostly absent here. I say mostly because there are 2 ports on the back that might double as turbines. 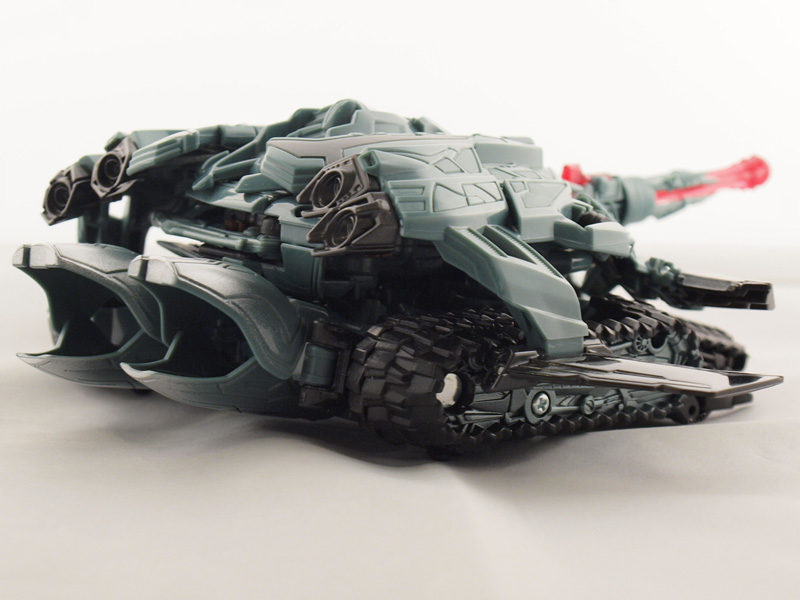 The turret still features a launchable missile. However, this one has SOME movement to it. Although you can't rotate the turret itself, you CAN rotate the barrel. You can get up to 90 degrees of tilt and side to side bending, thanks to the pin hinge the barrel is attached to. One notable improvement over the leader class is the guard that covers the head. It's not perfect, but it does the job pretty well.

To start, remove the rear wings from the pegs on the tread and peel both sides straight up. While holding the rear flaps open (they're spring loaded), rotate the treads 180 degrees to the back. On the treads, you'll see a gunmetal panel on a pin hinge. Flip open the hinge, bend back the smaller tread, flip that tread inside the larger tread, and close the panel back up. Fold the legs back, then bend the knees forward so the legs is at a diagonal angle. Flip the feet forward.

Rotate the turret to the left so it forms the left arm. Conversely, lift up the panel on his right side to expose the right arm. As you straighten the arm out, a blade should flip out automatically. Lower the arm to his side, and flip up the spike on his right shoulder. Peel the face guards back and position his head in place. Position the backpack so the top end rests in the grooves of the guard. 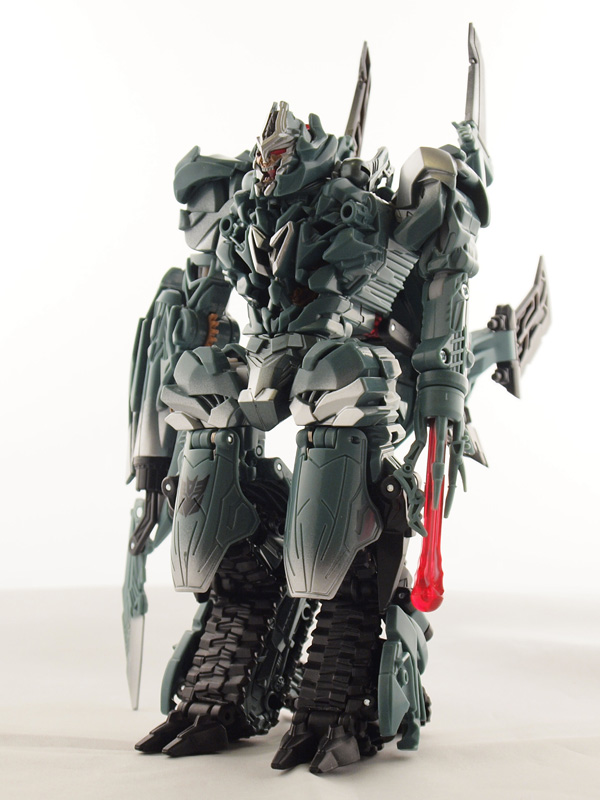 I can see the chatter of why people have been looking forward to this Megatron. He looks more impressive than his larger counterpart. You'll notice a lot of gold gearing in his chest, as well as on his right arm. The head scuplt is also full of goodness, with lots of detail and character. The eyes are piped red. 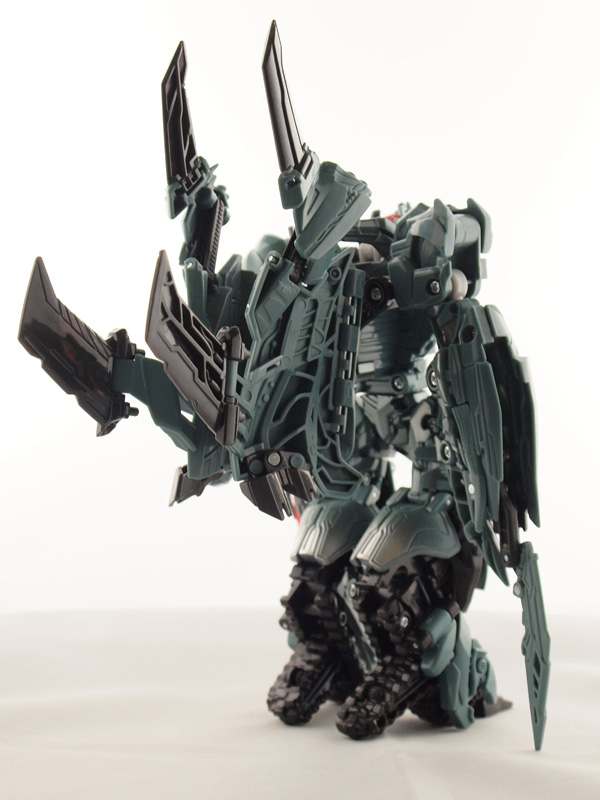 The other good point is that both arms now have elbows. It was a sore point on the Leader version. Unfortunate that the smaller counterpart will have more articulation. The only real bummer is the backpack. It's massive and has a sort of disconnected feel to it. You can choose to fold the panels alongside his back, which helps to minimize the look. I dunno what to think of the Mech Alive feature. As you rotate his waist, the gears in his chest spin. You really have to stare into the chest to see them spin, though. 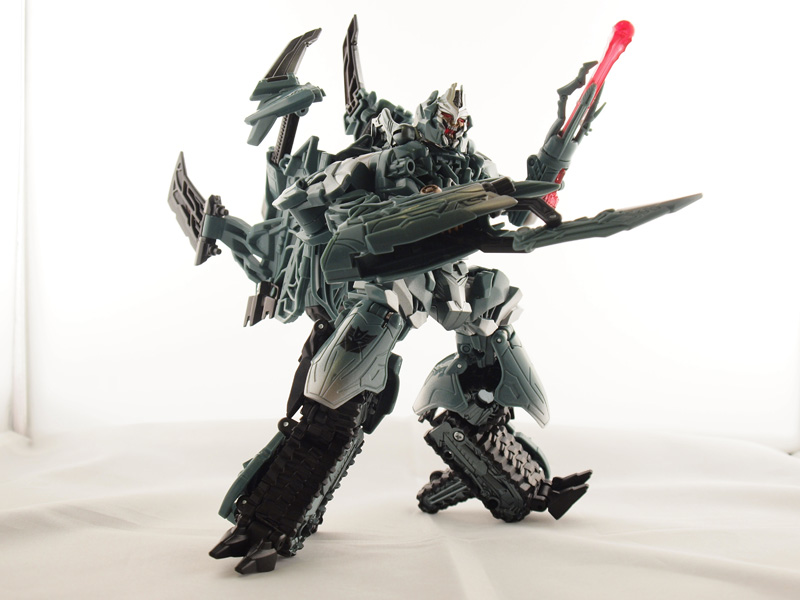 
The backpack hinders hip movement some, as does the guards on the sides of the head. You can move the head forward a bit to get more posing, but it'll look a little out of place.

Back kibble is unsightly, but overall the figure has more personality than the Leader does.
Overall:

Save yourself $22 and spring for the Voyager if you've been on the fence.