Can you believe we're already on the third wave of Voyagers? We're also on our third Constructicon. Remaining true to his G1 roots, Mixmaster is as his name implies.

Resident chemist and explosives expert for the elite among the Decepticons, Mixmaster has spent his entire life learning all there is to know about chemical interaction. He can make thousands of poisons, explosives and deadly gasses from the materials around him. The other Decepticons rely on him to fashion powerful warheads for their missiles, and dangerous venoms in which to coat their blades. 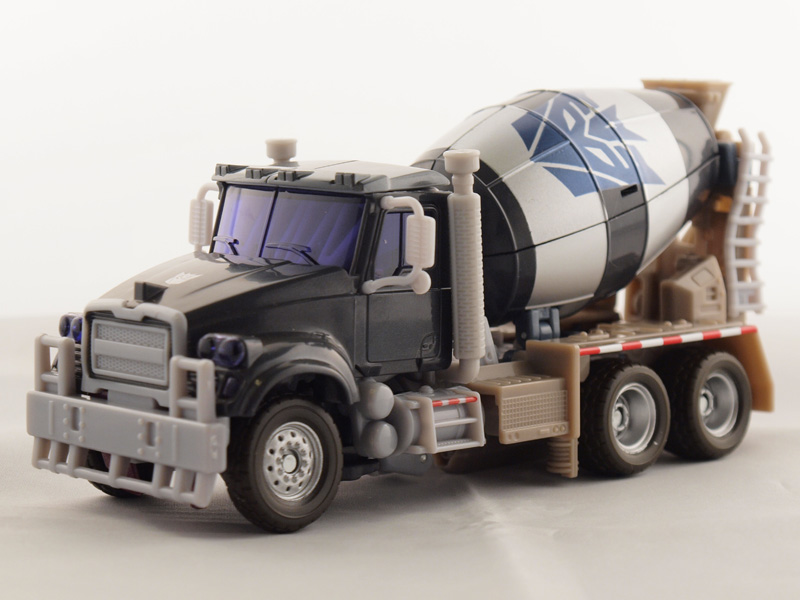 Mixmaster is based loosely off of the Mack Granite series tractor cab equipped with a cement mixer. I say loosely because the 10 percent rule applies and there are no familiar bulldog logos on the cab. You will spot several Decepticon logos though, including a small one on the hood and 2 very large ones on the mixing drum. Colors are mostly dark gray with tan on the rear chassis. 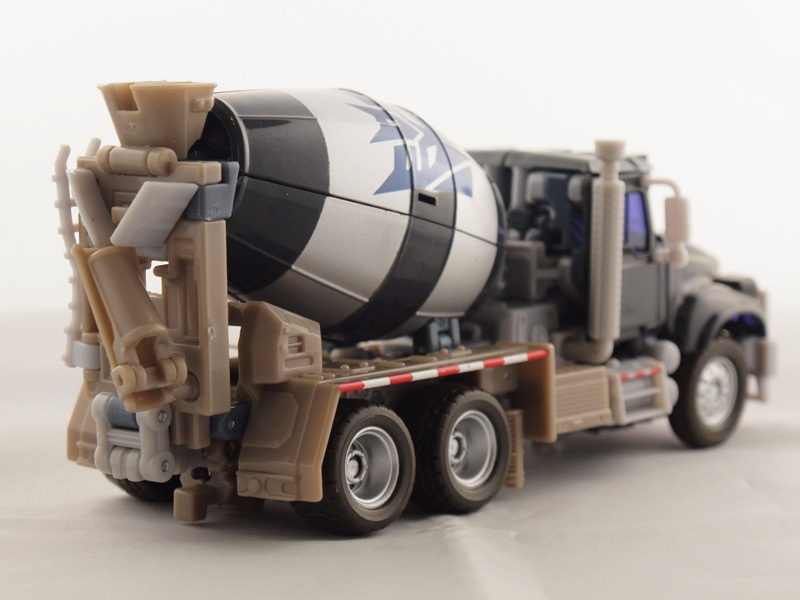 Details are plentiful. The grille is nicely detailed and protected by a brushguard, as are the jeweled headlights. The side mirrors are rubber. The drum has a cement slide complete with collapsible chute for your pour jobs. Only two minor complaints. The mixing drum is static, which is understandable given the transformation. However, the exhaust stacks don't lock in place and take constant aligning. A tab would have been nice, but again it's a minor complaint.

Start at the back end by rotating the cement chute to the right side, flipping down the chute funnel and rotating the man ladder to the back. Grab the rear axles, pop them off their pegs and fold outward. Now, split the mixing drum in half and fold out so it makes a "T" with the cab. Next, split the drum again and fold the lower quarters of the drum down to form the arms. Rotate the drum piece on the arm so it sticks out. This will take some practice, but rotate and move the rear wheel assembly so that, eventually, the treads point to the back and lay against the drum piece on the forearm. If everything goes right, there should be two gold tabs on the shoulders facing out. and the belly of the cab should be facing out as well.

Unlatch the missile launcher and flip it so it sticks straight out the back. Peel back the roof of the cab, then flip the cab body around 180 degrees. Now do the same for what will be the legs (the cab's interior). Rotate the cab shell so the grille faces the back of the legs. At this point, you'll see the upper chest. Position the fuel tank/exhaust assembly so the exhaust lies on his chest and the tanks lie diagonally with the stacks.

In a few steps, you will fold the chest out, then collapse the rear of the mixer chassis so it all ends up forming the back. The launcher will snap into place on a tab on his back. The cab shell then folds up on the lower half of his back. Rotate the legs so the wheels face inward. Move the roof panels on his feet to the outside, flip the foot and the rear hanches down, then position the roof panel to the side. 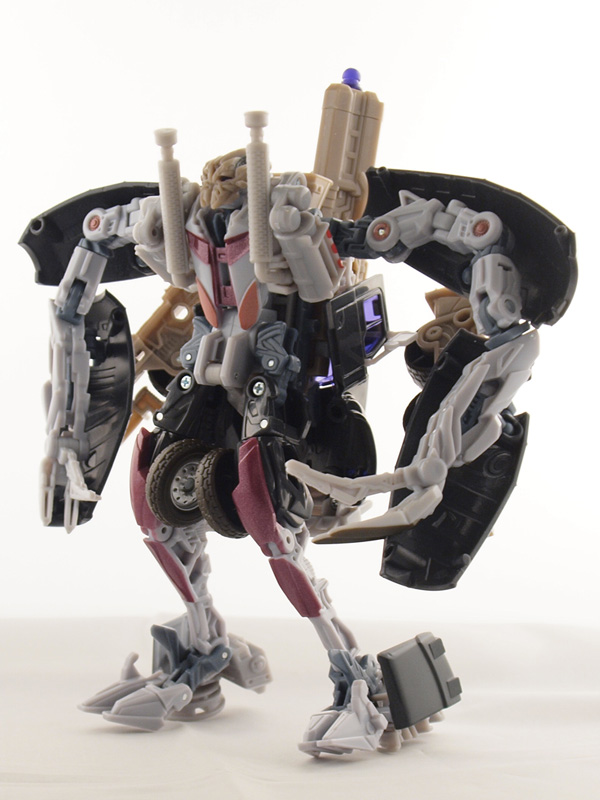 From what I can tell, the Constructicons have the potential to look amazing on screen. However, as toys, the look doesn't translate nearly as well. Don't get me wrong, Mixmaster looks great. A little bit of magenta is mixed in on the knees and chest. The upper body and limbs are mostly PVC Gray. Strangely enough, Mixmaster's head sculpt looks similar to Rampage's, but features blue piping. 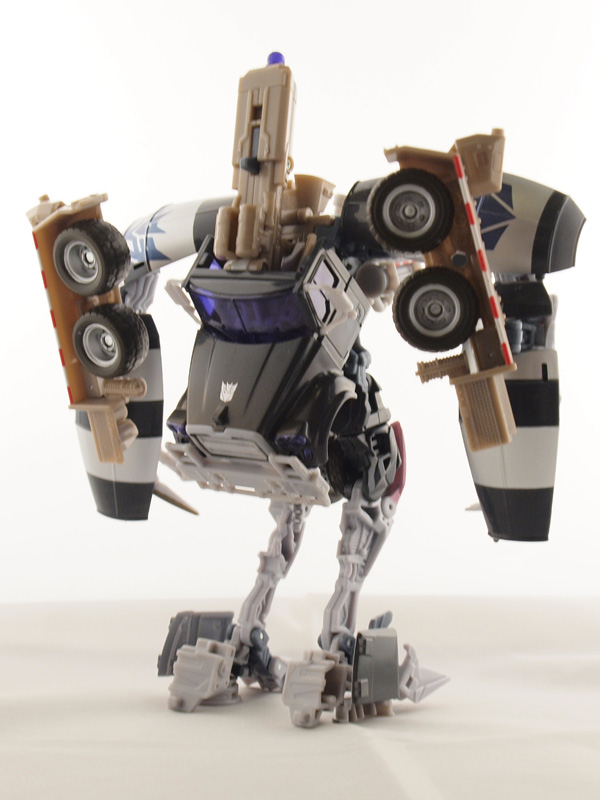 The only weapon Mixmaster has in this mode is the missile launcher, which rests on his back. Makes for a perfect ground to air attack, but he'll have to rely on his claws for close combat. What kills this figure in the end is arm kibble. Between the drum parts on his arms and the rear axles hanging on the back of the arms. it's tough to get a decent pose. It also hampers balance. The permanent bend in the legs doesn't help matters, either. Someone help me on this, too, if you can. The box advertised a Mech Alive feature of spinning gears. Either I'm blind, or I didn't see any spinning gears. The box art pointed to the chest, but there's no gears there at all. 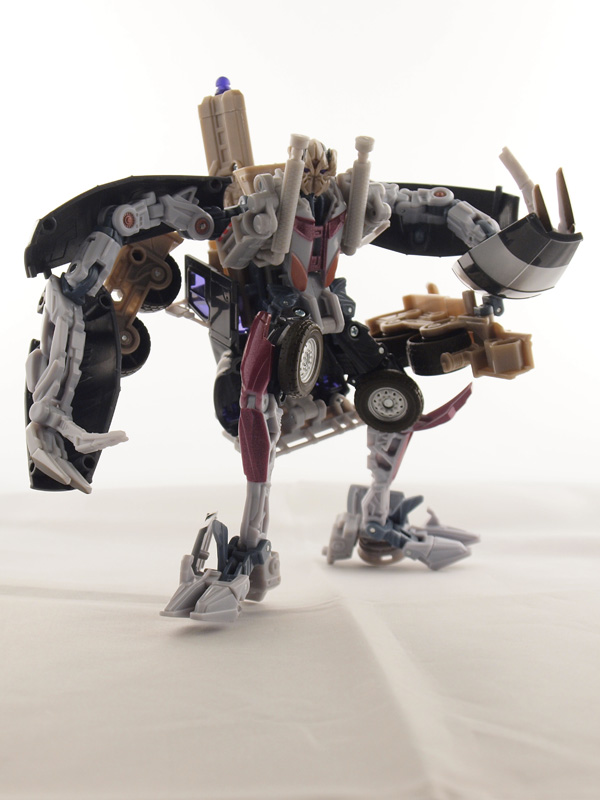 
The joints are set up well, but the back and arm kibble pose restrictions.

From robot mode, pull the head so that his face faces upside down on the back. Pull down the cab shell and disconnect the launcher from the back. Flip down the chute funnel (the small, tan piece) and reconnect the launcher (at an angle) to the funnel. Position the arms so that the shoulder pieces point straight up and the arms have the drum piece facing up as well. Fold the outer claws into the drum, but fold the center claw out at a 90 degree bend.

Spread the legs so that you can flip the cab shell around to his chest. Rotate the legs back as far as you can so they're at a 90 degree backward angle to the body. Fold the cab shell back into the chest. Position the arms so that the rear wheels face out to the sides and the center claw faces down. However, the rear step needs to be INSIDE the drum piece. You'll note a slanted peg hole inside the body. You want to line up the pegs on the rear wheel assembly to this peg. Position the legs so the heels face forward with the toes folded back. Flip up the knee guards to finish. 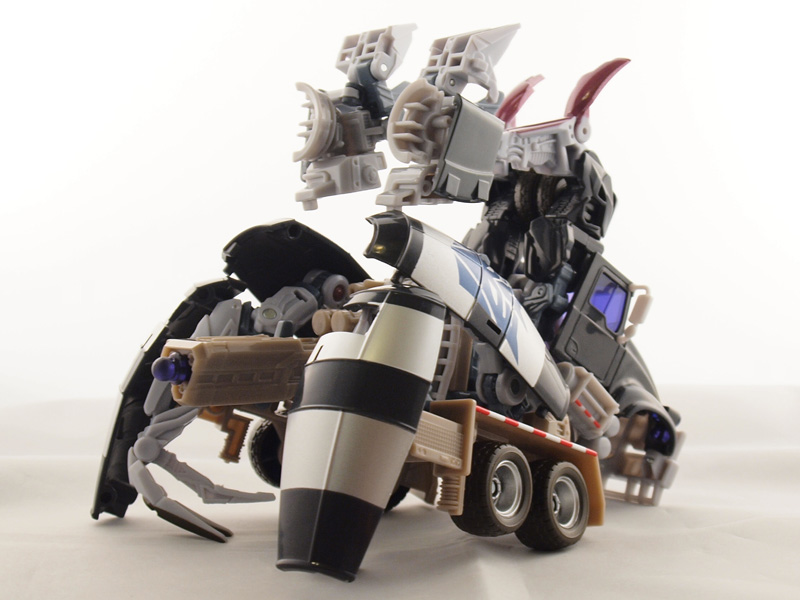 The end result is, well, kind of a mess. It almost looks like someone got all turned around transforming it to robot and said "HEY! This could be official and we'll call it a triplechanger! BRILLIANT!". On the plus side, it does make use of that missile launcher. I'm sure, if used in the movie, the battle mode looks impressive. However, in toy form, it looks like drunken origami.

Good looking robot that suffers from too much kibble.
Battle Mode:

Why is this here?
Overall:

Forget about the battle mode, play with the robot mode to fine tune posing and admire the alt mode.