At some point, you have to ask... how much is enough? There's already a Deluxe Bumblebee out there, and now we're getting another within a month's time? There better be a monumental difference between the two to justify purchase. This review looks Cannon Bumblebee, the 2nd figure bearing the BB name to be released as a Deluxe.

After the battle of Mission City, and discovery of new Decepticons on Earth, Bumblebee decided to upgrade as many of his systems as he could. With the help of Autobot Ratchet, he added some human missile launchers to his arsenal, and modified his vehicle mode to make his weapons accessible. He was caught off guard too many times by the Decepticons. Now when they come around, he'll be ready. 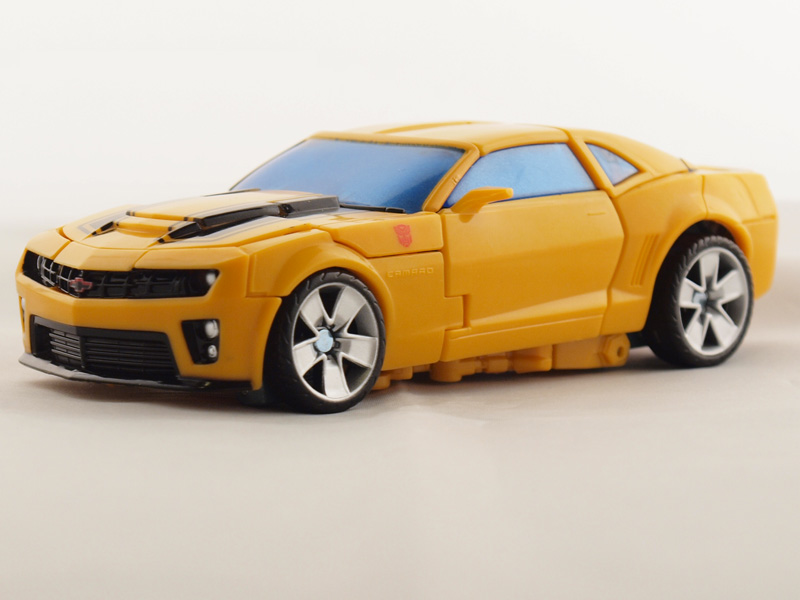 This version almost looks like a Premium grade in some ways. It uses the same painted windshield as the Premiums did from the last movie, at least. The windows are the main identifier, but the seam lines are also key. For instance, the roofline isn't split. Neither is the front clip. 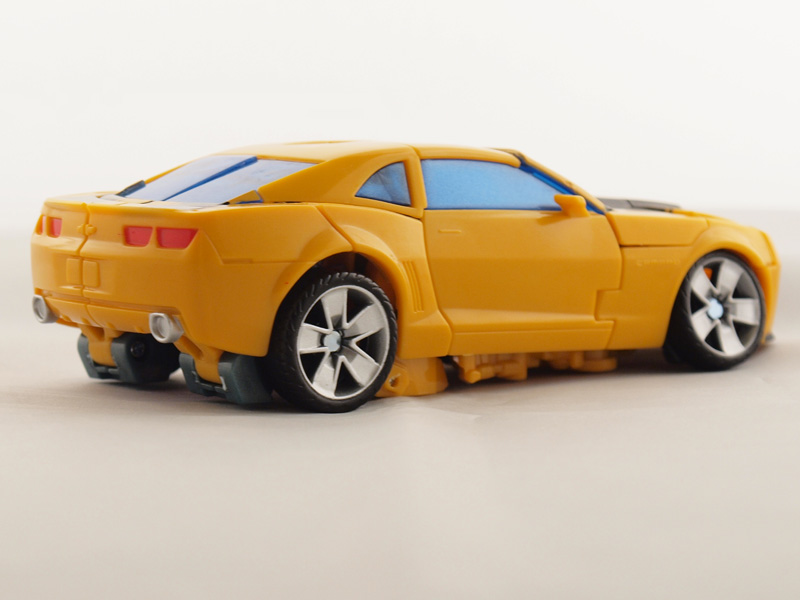 What is new is the Autobot insignia riding just behind his left front wheel. This hides the new gimmick of Cannon BB. Lift up on these panels and a pair of gatling guns surface. Flip out the guns, then lower the fenders back slightly. I suppose it's a clever gimmick, but couldn't they have just worked this into the preview figure? 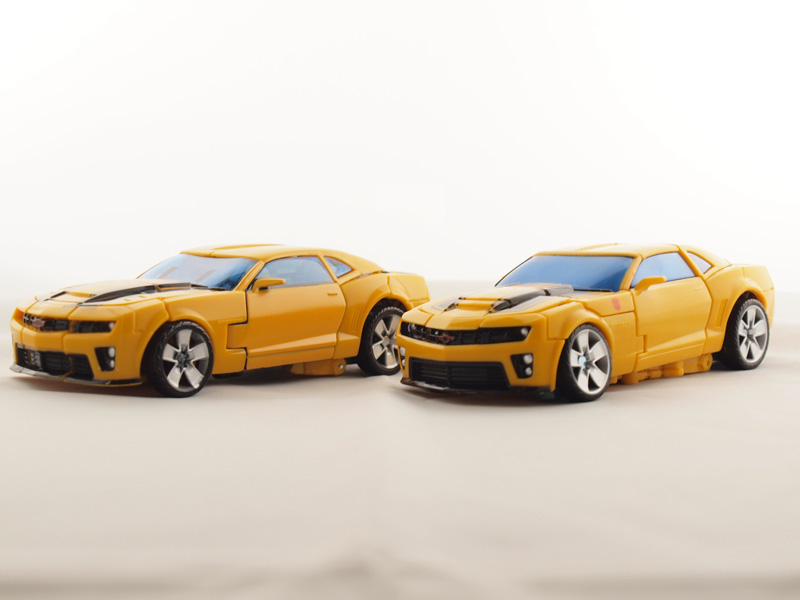 Due to the gatling guns, there's several changes to transformation. The wheels now flip into the hood and hold the arms. Start by exposing the arms. Then open the doors. The fenders no longer pull out. The legs are pretty much the same transformation. You'll notice two small panels on the belly. These rotate down to form the waist. Detach the windshield from the roof, pull the front of the hood forward (exposing the head) and pull the rear of the hood back. Then, flip the front clip forward, locking it into place using 2 tabs on the waist. The rear glass collapses into the roof, which rests on his back. Line up everything to finish. 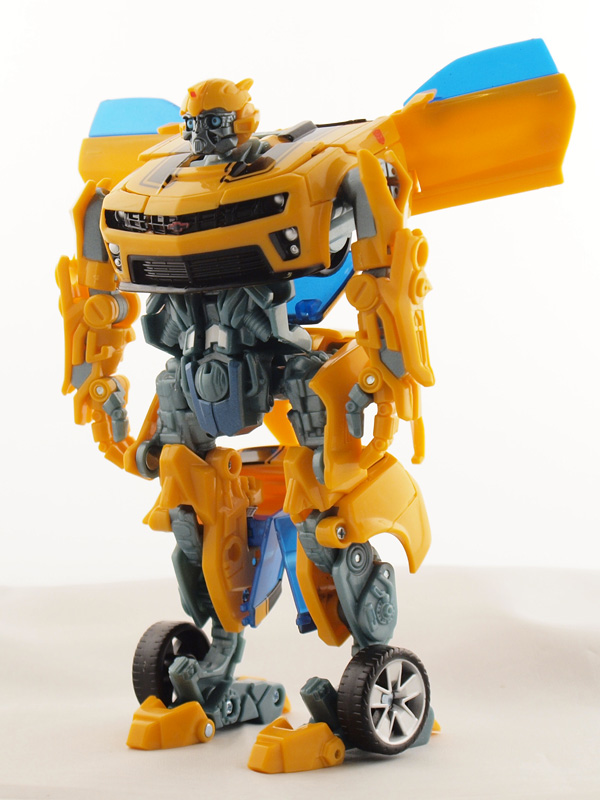 The end result is a different aesthetic. Body color is still yellow, but now is also highlighted by a bluish silver. Gone is the multi-segmented grille-chest area, which is now all one piece. Another change is the lack of door kibble on the arms, which is most welcome. He is now back to having 2 hands, with moving thumbs. The head has slightly more paint detail, but no piping. 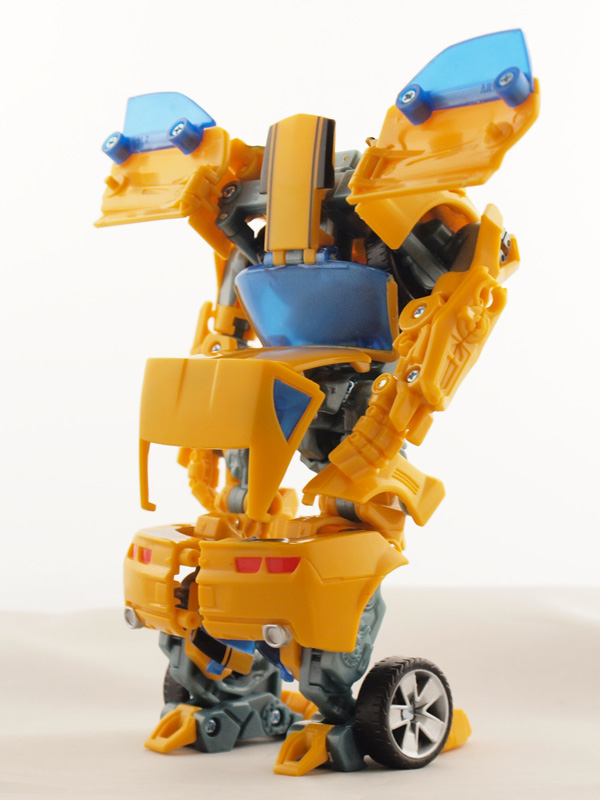 The hood cannon gimmick still works, but now act as shoulder cannons. As mentioned earlier, it's a nice gimmick but is it worth a 2nd release? As it is, this figure is like a hybrid between a FAB and a Deluxe. I say that because detail seems to be lost in robot mode and the one piece chest adds to that. I think if they had they took the preview figure's arm and slapped it onto this figure and just released this one, I might have been happy. As it is, you're stuck in a lurch wondering which of the 2 to get. 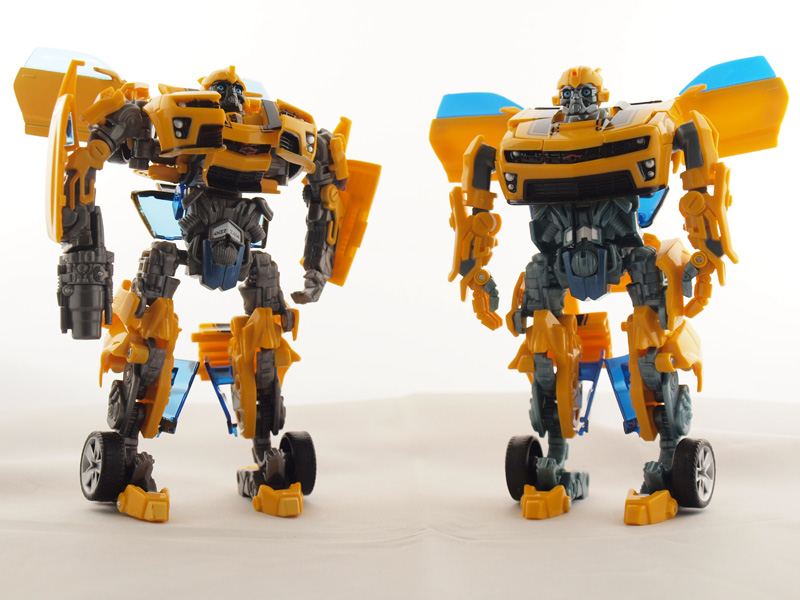 <-- Plasma BB figure vs. Cannon BB figure -->
The difference in detailing is apparent in side by side view. 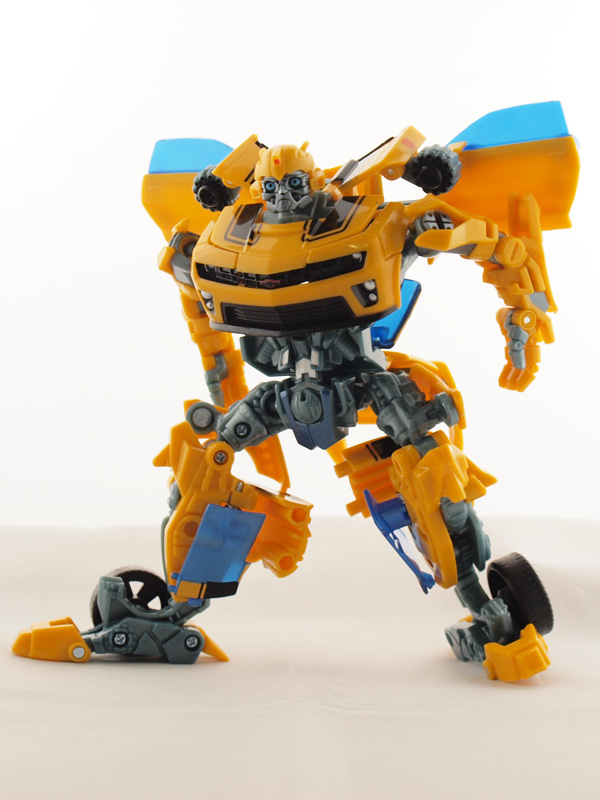 
Even though some parts have changed, articulation remains virtually the same.

Basic car design in the same, but if just feels 'cheaper'
Robot Mode:

Loss of detailing gives it too much of an FAB feel.
Overall:

Do you really need 2 BBs? Personally, stick with the preview figure. Deduct 2pts if you already have the preview.