Having spent the better part of the last 24 hours contemplating Transformers: Revenge of the Fallen, I have finally developed an opinion of it. It was not an easy task. 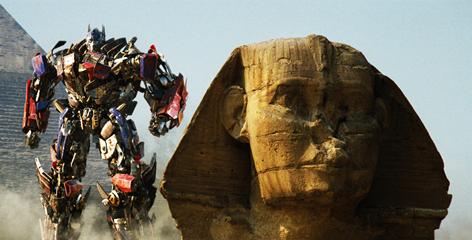 I enjoyed it; there is no question of that. Having been thoroughly disappointed in Michael Bay’s first outing into the Transformers universe, I was delighted to find in its sequel a single, coherent (if convoluted) plot; significant, occasionally enjoyable, Transformer dialogue; and much improved and more frequent action sequences.

As I left, however, I noticed I had a dull pain forming in my skull and slowly came to the realization that it was a side effect of the 223 times this movie made me roll my eyes skyward in disgust, usually accompanied by a sigh of disapproval. While I felt I had had a good time, it was clear from start to finish there was a lot not to like.

The story, while more engrossing than its predecessor, is retcon’d out the wahzoo. The biggest and goofiest one of these retcons is the Fallen himself, or as he might be more accurately described, Palpatine Prime. The Decepticons have way more personality – which is unbridled awesome – but they get undercut by this beefed-up side character.

Not to mention, for robots, the Decepticons seem to have a distracting amount of problems with dental hygiene, ptyalism, and, surprisingly, infant mortality.

The Autobot team felt a little underplayed. Like the look of Sideswipe, Arcee and the bikes? Too bad! Buckle up for unending cavalcade of Skids and Mudflap scenes! They’re hard to look at and offensive to listen to. So inappropriate is the stereotyped performance it calls for a quick head count that reveals Sgt. Epps might as well have been named Lando. 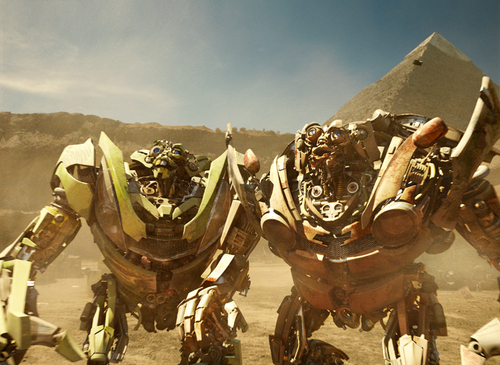 Their humor is funny… for about 30 seconds. Too bad they’re onscreen for an hour.

Revenge shifts focus a ton. We’re all over the place in this movie. It’s a slagging travelogue.

Despite one or two good lines, John Turturro was largely wasted in the last movie. Not so this time. He has more to do – and even gets a sidekick.

Shia LaBeouf, with whom I’m normally impressed, is a little up and down. Sometimes he just doesn’t seem to be into it. Maybe it has something to do with the proximity of shooting dates to when he was injured. 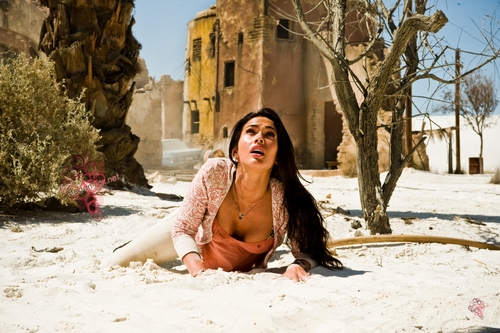 Megan Fox delivers a better performance than the last film, but you might not see it as her entire head is concealed behind her giant new lips. They are so unnaturally large, made up, and focused on in every shot she may as well be wearing a clown nose. They’re like their own special effect. ILM could have done those better.

The two leads still have no chemistry. Sam and Mikaela’s relationship seems like it’s two months old, not two years. Their manufactured relationship problems are a your cue to take a bathroom break.

Has anyone noticed that since this movie is two years later, they were 22ish playing sophomores in high school in the last movie? How… Disney channel. 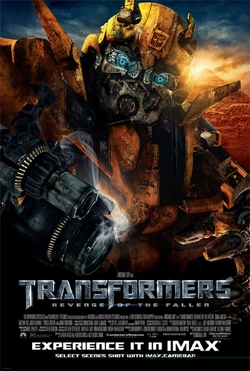 Planning to see RotF in IMAX? Bring a sick bag.

The camera work during battle is much better than the first: shots are longer, and I almost always felt like I could tell what was going on. Big improvement.

However, when there are just humans on screen… watch out! They need to spice those shots up apparently, especially if nothing is on fire. There was one spinning shot in particular during which 90% of the theatergoers grabbed their armrests and reared back a little to adjust equilibrium and prevent mass reverse peristalsis. This seems to be a bit much for a “two shot.”

Julie White and the always awesome Kevin Dunn are back as Sam’s parents and they rule. One scene with his mom goes on for a bit long, but mostly these two character actors give the film its only real emotional grounding. Which is kind of sad because they’re mostly for comic relief. 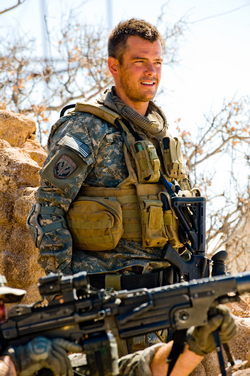 Very solid performances from Josh Duhamel and Tyrese Gibson. Their duo was just as engrossing as the first film, but actually felt like part of the plot this time around. I could have stood to have seen more of them.

Devastator is big. That’s the only nice thing I can say about him or his negligible part in the film.

And then we have Optimus Prime. The leader of the Autobots, while not in as much of the film as one could hope, will keep me coming back to this movie again and again. Prime is amazing. Gone is the rag-doll Megatron tossed around at the end of movie one. He has been replaced with 15 tons of red and blue skidplate-kicking vengeance. He made me giddy.

Herein lies my problem. This movie is not good. It’s filled with continuity problems, plot holes, poor cinematography, flagrant unapologetic sexism, and negative racial stereotypes. There’s even an unnecessarily disturbing torture scene. It has a toy line aimed at 5 year olds but should be viewed by no one younger than 13.

But I really enjoyed it! How could I with this laundry list (that would be much longer with spoilers) of complaints? Because I am a G1, Prime-obsessed fanboy.

I’m not sure how anyone else could make it through this movie. I’m not surprised the reviews have been so bad. It’s not only poorly made, it’s offensive to boot.

I’m planning to see it again, possibly several more times. I’ll even happily endure Sam’s never-ending one-socked relay race (which might as well have ended with him and Megatron jumping in potato sacks, as silly as it was getting). With the ’07 movie, one trip to the theater was enough, but not this time. When I get the DVD, I’ll watch it again and again, and I’ll enjoy it. However, it’ll be on the same level I enjoy Masters of the Universe, The Super Mario Bros. Movie, and Howard the Duck. Movies that I take great pleasure in, but do not recommend. Because they’re bad.

So in the end it turns out the only feeling I can muster for Revenge of the Fallen is ambivalence.