Because you really can't have Soundwave with at least one of his minions, we herald the return of the black panther known as Ravage. This would mark his first appearance in 10+yrs. So how good does this figure do? Let's find out.

Bulleting down through the atmosphere at better than 15 times the speed of sound, Ravage considers the data that he has already amassed on the small, soft creatures that inhabit this planet. They seem weak and fragile, yet they are the ones who destroyed Megatron. That is a fact he will keep in mind as he penetrates their most sensitive installation. Against such an unprecedented enemy, stealth will be his watchword. 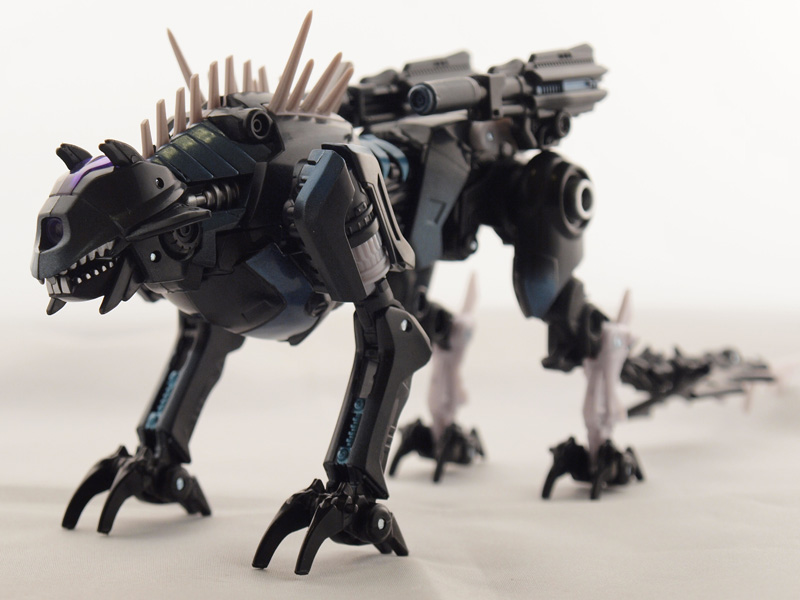 The beast mode certainly is a beast, alright. The figure is mostly black, with some turquoise showing up on the back and neck. You'll also see some PVC gray. He has 3 rows of rubber spikes protruding from the neck to the shoulder blades. The tail has a joint mid-section and is also loaded with spikes. A pair of hip cannons are in the rear, and can be adjusted. There's a fair amount of detail to be had, including simulated gearing in his upper arms. 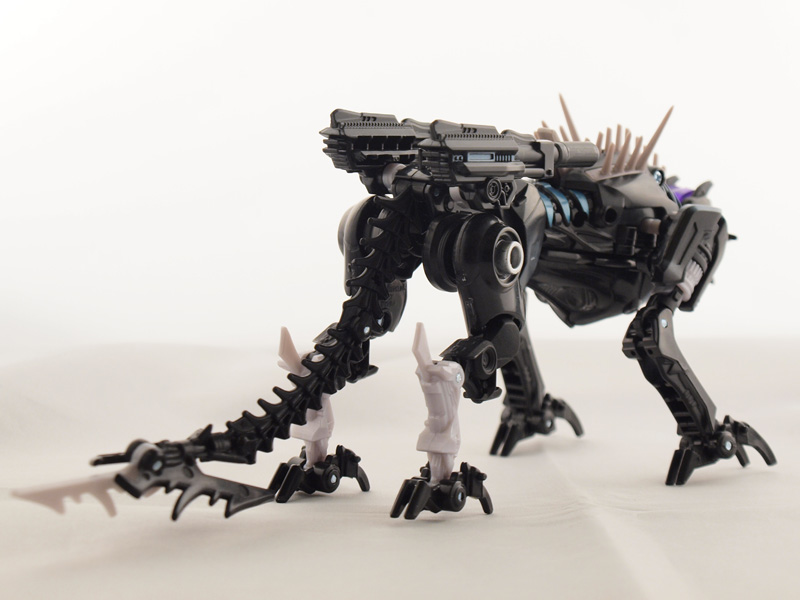 The head sculpt is definitely other worldly, featuring a single eye piped in purple. You'll notice the forward leaning ears and the mouth full of sharp teeth. Both of these features pack some action thanks to the Mech Alive gimmick. Pulling back on a lever just behind his shoulders will extend the neck out about 1/4" (6mm), open the mouth and pull the ears back. It's a neat feature, but at the cost of having a stationary head. 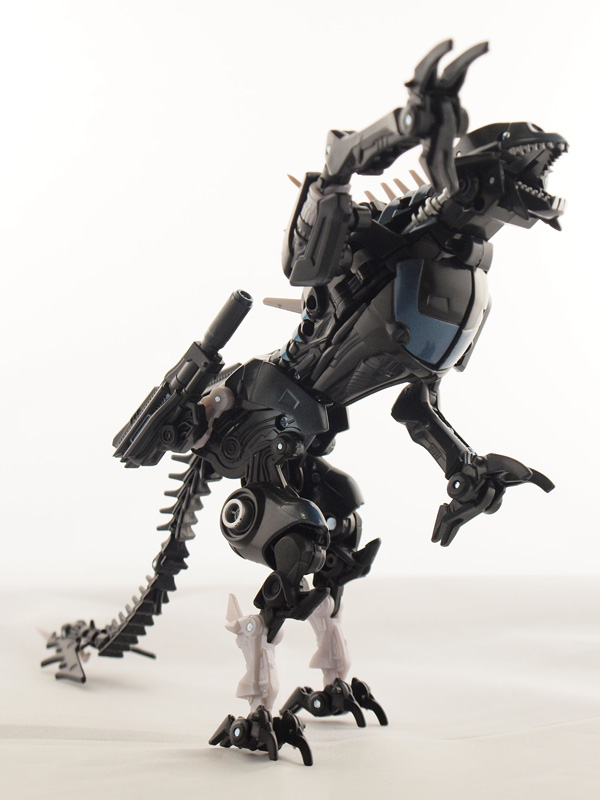 
A wide level of articulation, so long as the joints are stiff.

Transformation is simple. Straighten out the rear legs (including extending the "hidden pin joint" and fold the rear feet in backwards. Extend the front legs completely down as well. Fold back the gray part of the tail so it forms a point instead of a trident. Rotate the cannons as far forward as they will go. Pull the front legs forward and twist the lower front legs so the claws point forward and the outer claws are on the outside.

Split the chest area in 2 and fold each half out and back. Fold the rear legs completely in so the rear feet are at about his jawline. Fold the tail in so that it sits below the jaw. Extend the turquoise winglets on the chest halves outward. 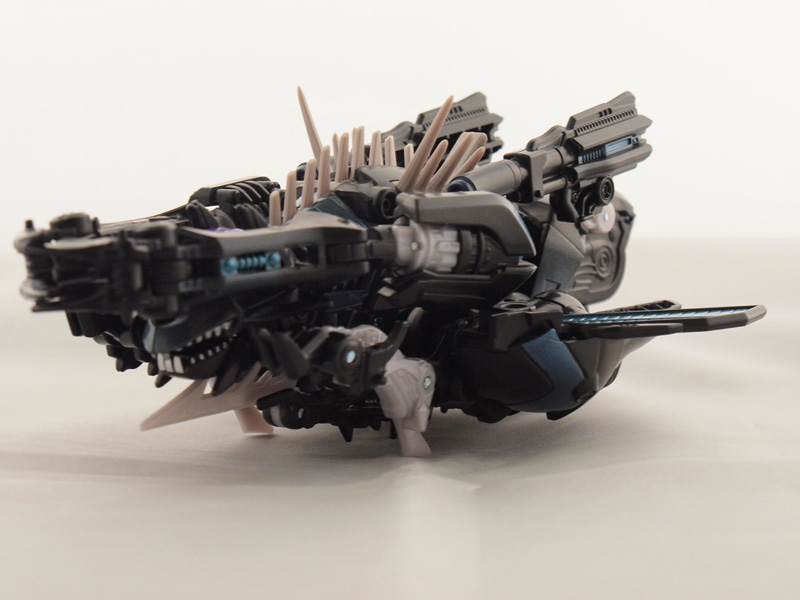 The packaging says it's a re-entry mode. I say it's lack of imagination in finding an alt mode. It basically just looks like a folded up Ravage. 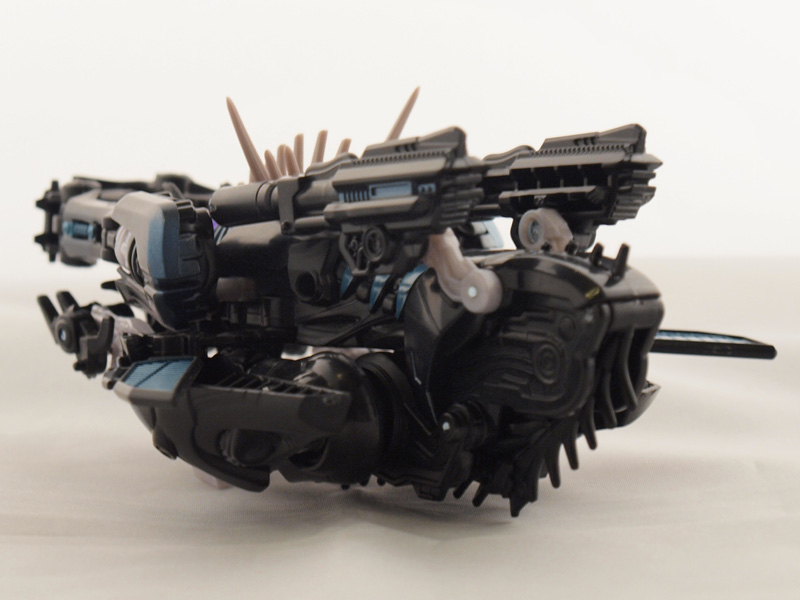 The rear cannons are still adjustable and you can adjust the wings. But seriously, why does this mode exist? Maybe it looks better in the movie. Seems to be the way this time around that the movie appearance can't translate into an action figure at all.

A shame that, for once, a great robot mode is wasted by having a lame alt mode.