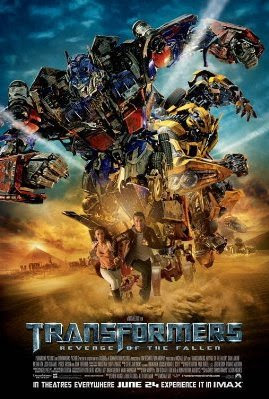 Simply one of the most anticipated movie for 2009, is Michael Bay's second take on Takara / Hasbro's Transformers toy line. The first movie more or less has introduce the concept of Cybertronian beings the Transformers (who doesn't know the origin anyway, but it is almost a must in live action movie to tell the origin) and thus, in second movie, we can all go straight into the action.

Optimus and Ironhide examining the corpse of Demolisher.

The first movie started of with a brief narration on what happen to Cybertron and the main McGuffin of the movie, after it the title screen and followed by the most jaw dropping first act - the attack of Blackout. What can top this? Haha ROTF can. The film starts with another Optimus narration on the relation between Cybertron and ancient human civilization, ends with the title screen and followed by yet another adrenaline pumping breath taking opening - the Shanghai fight between Decepticons and Autobots!

On the Decepticon side, we have the huge Demolisher and the sleek Sideways. For Autobots we have the motorcycle trio Arcee, another new comer Sideswipe, the annoying twins Skid and Mudflap plus the Ironhide, Ratchet and the great Optimus Prime. The sequence is later explain to be a joint venture operation between the Autobots and human military program called NEST. To know more about NEST and how they develop such a charming "brotherhood" between the soldiers and the robot, the movie prequel comic - Alliance will be a great help. This big fights end with Demolisher's dying words that The Fallen will be coming. 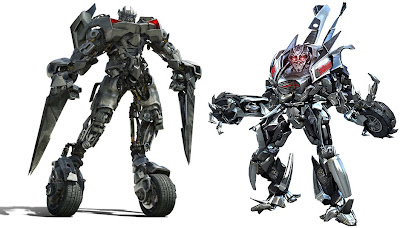 The Sides - Autobot Sideswipe easily cut Decepticons Sideways into half

After the exciting battle, we got to rest a bit where the films showing us the current activity of the Autobots, the Witwicky family, and also the Decepticons. So this pace is keep on repeating throughout the movie. Hyper kinetic action scene in a minute, and the next a moment to breath with some exposition and silly jokes (most works).

I think this film is more about growing up and taking responsibility. At least for the human lead - Sam. His refusal to confess and say the L word to his girl is a recurring gag or scene in the movie. He also getting into a new life - college life where he meet a few nerds which more or less reminds us of Sam before we meet Bumblebee and the Transformers. Somehow, it makes me think that what makes a nerd nerd is the immature and narrow world view, lazy, powerless and whiner. That was Sam before he get involve with the Cybertronian. That's maybe why same is less excited to meet all those nerds and to a certain extend rather sick of them. But still, he think he is still the same guy as before and want to go back to his previous life. Back to become a nerd, stay low profile, do things how people normally does and stuff. That's why he refuses to help Optimus Prime. He believes he is just a small potato, well he is, and he just want to have a normal life. But we all know that for any movie character that wants a normal life, most of the time they never get it! At the end, Sam does realize that whether he like it or not, everyone has his or her own responsibility and destiny, and some may not be in line with what is wanted. 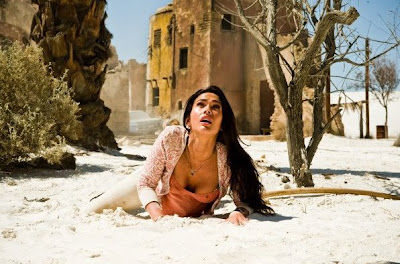 Throughout the movie, this lady tries to make Sam says "I Love You" to her and Sam can resist doing it...can you?

Megatron returns, with a slight redesign that makes him look stronger. We also get to know that he report to an ugly robot known as Fallen. Their relationship and the whole energon harvest thing is explored in another prequel comic - Defiance. This two comics I really suggest and recommend to those who wants to enjoy the movie without needing too much attention to digest what is what and who is who and what all this hell is about. Of course as of any Michael Bay's movie, those question is not important, but to fully enjoy Transformers in this age, some knowledge on the continuity's mythology is always essential. 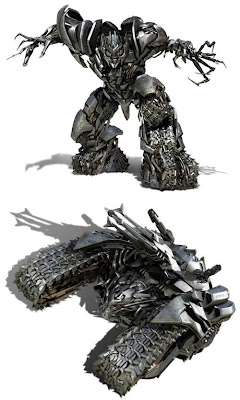 Megatron with his tank more. In the movie he also has a flying mode.

For all the fans, especially the G1 hardcore, we finally get to see more scene between Megatron and Starscream. We always like the exchange between this two, the insults as well as Megatron's physical abuse on Starscream. Starscream is slightly rewritten into less of a selfish incapable coward like in the G1 cartoon, but more calculative and realistic. Although the hypocrisy towards Megatron is still as fake and most annoying to Megatron. Somehow, this Starscream is way more charming than his G1 counterpart and further establish Starscream as one of the Decepticon evergreen favourite. 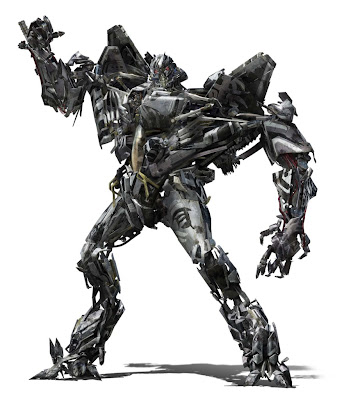 This Starscream looks cooler than in previous movie.

We also have Soundwave, not as a mass shifting radio but a alien satellite, still quite in line with the concept of his G1's alternate mode. Taking form of a communication device and spying, gathering information and relaying commands for the Decepticon. Although playing a major part in the plot, but he never set foot on Earth, which makes him so cool. He arranges everything but yet, he stay up there in the outer space banging one of Earth satellite. Best part is, he ejected Ravage - the robot panther!

Ravage, with missile launcher mounted on this back! Cool!

Other than this, we also have a variation of the Insecticons, the Pretender in the form of the spooky looking Alice, female Autobots, and the most attention grabbing, the combiners!!! Basically there is two types of combiner here, one is the old Consructicons that combine into one Devastator. Unlike in cartoon where combiner still retain humanoid figure, this "more realistic" approach make him a heavy weight and he can't stand up straight, but have to hunch and move like a gorilla. Another combiner is the new form Optimus gain temporarily with parts of Jetfire. Unlike Devastator where the combination of six robots will create a new consciousness, the combination of Optimus and Jetfire will retain Optimus Primes's consciousness. Reason being because Jetfire sacrifices his life to give Optimus energy and additional part. So at the end, for a few minutes, Optimus looks very anime like and can fly~!!! 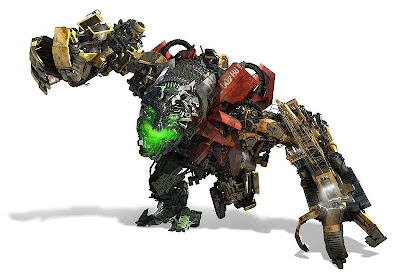 Devastator, brutal looking, true to its name. Better if can do away with the reds.

For those who grow up watching Transformers, it really feels like meeting an old friend when concept such as Space Bridge, The Matrix of Leadership is mentioned, although how it is represented is a little different. Still, we can have everything is the cartoon and comic to just made into movie mode 100%. Some may works for cartoon and comic, but never achieve the same resonant if made live action.

It is a bit subtle, but this film also show us how war hardened the Autobots has become. Although their are noble and a loving kind, but years of wars has made them understand that mission comes first, and wasting time mourning over the lost is exactly not the thing the dead comrades wanted. When they need to fight, to survive, to execute a mission, do that first and mourn when they have the time and means to do so. If not all the sacrifice will mean nothing. This is something that we can explore only after a while of reflection on certain scene that sounds don't quite right to you. When you expected the next scene will be a silent moment where a senior member will say something meaningful and inspiring, it turns out to be another action sequence and that moment you expected never come. But after the film and you think about it, think about the Autobots and what have they done so far all these years, you will realize this rather sad, tragic but yet honorable thinking of theirs. Optimus Prime has a cool sequence where he fight three Deceptions including Starscream and Megatron all on his own!

Sadly, although we got more time to explore on Sam who has become less annoying than the first film, time for Lennox and his team is relatively little. The partnership between NEST members is something rather fun to watch. The mum's gag in the college is just stupid and redundant. It should really be cut away. It is good and Simmons return, John Turturro's performance has made this initially irritating character more and more fun to watch and likable. 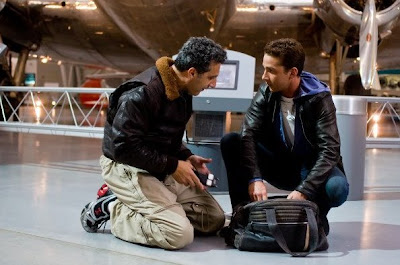 It will be better if we have more screen time for Autobots character development. Did Arcee even has a line? What and how is the relationship between the Bots? One of the most satisfying non-action Autobot scene is where Bumblebee throwing out the totally wtf Skid and Mudflap out of the Petra. If we remember Bumblebee from the G1 cartoon, he is always one of the younger adventurous immature Autobots that always gets into trouble with Spike. But now he is depicted as young but mature senior Autobots who can make firm decision and take the correct course of action when is needed.

Bumblebee, a young brat no more!

I hope Sam can do the same to Leo, but we get to see this sissy get zapped anyway and it is satisfying still. Human Leo along with Autobots Skid and Mudflap are the most irritating and god-I-wish-they-were-dropped-from-the-script characters in this film. I really cheering for Devastator when he swallowed Mudflap, but too bad he survive...KNN! Bay, why can't you kill this two so they won't be in the third movie?

Overall, in first viewing, there is so much in the screen that sometimes our brain just freeze and can't process anything. Second and subsequent viewing will let us see better who is fighting who and how it is done better. Still, although it is lacking in the plot, and generally a male oriented movie (hot babes, shiny slick cars, gun, military vehicles and explosion in every act), but it is always a worthy experience. It is an ultimate popcorn movie and a good specimen of entertainment movie kind of movie. Wanna have a good time in a movie without all those head aching message and confusing story? Get Transformers : Revenge of The Fallen! 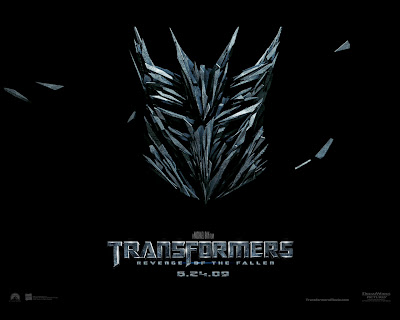