You'd think that after 25yrs the G1 fans would have enough of the show that started it all. Fortunately, they haven't. Rhino set out to offer all 98 episodes of Generation One, but the sets were pricey and often hard to find. The quality of the shows and extras were also questionable. Shout Factory has now secured the rights to the Generation One shows and has started releasing them in DVD sets. However, for those who don't want to wait for all 5 sets to eventually hit the shelves, they are also offering a "Matrix of Leadership" complete boxed set containing all 98 episodes in one tidy package. 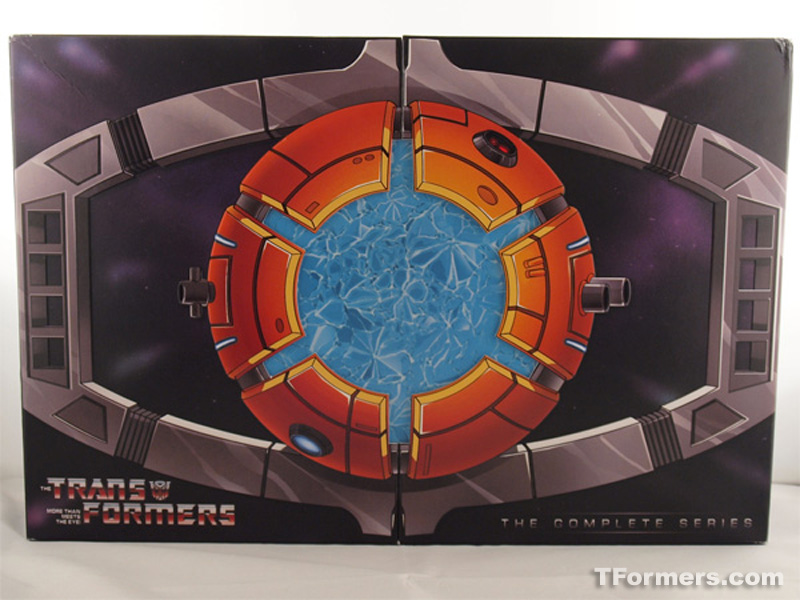 The box holding all these goodies is pretty big. It's a simple package, showing the Autobot Matrix of Leadership along with "The Complete Series" towards the bottom. However, 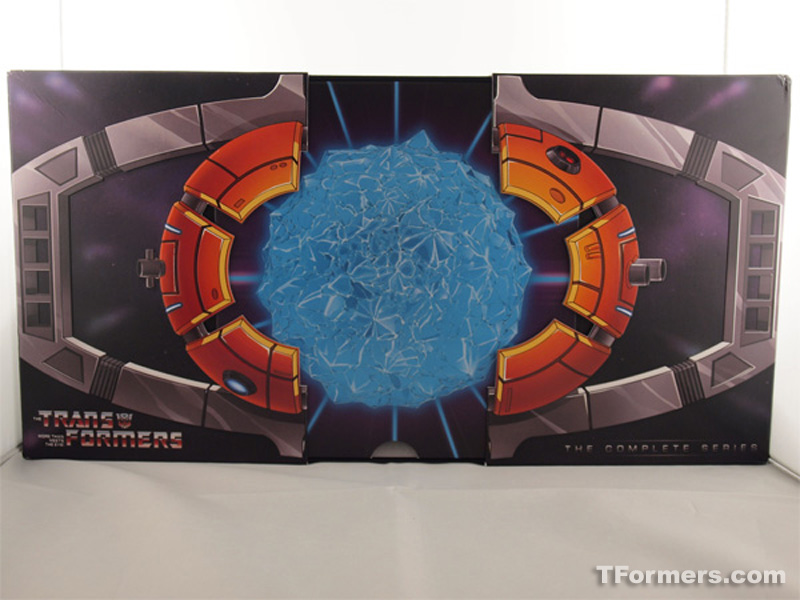 ... spread the box apart just like you would open the Matrix and you'll get a view of the core. Within the core holds all the contents that come with the set. Pretty clever packaging, but it does present a problem storage-wise, as it won't fit on your DVD rack. Fortunately, the DVDs come in sleeves that ARE rack friendly. 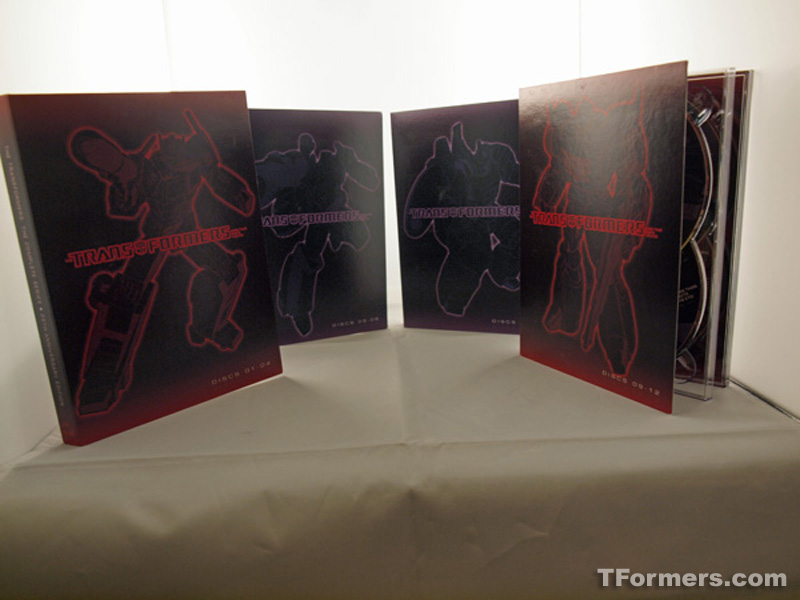 Within the boxed set, you will find the following contents:

The magnets are a simple black and white design, measuring about 4.5". The softbound booklet contains a breakdown of all 98 episodes, including original broadcast dates and some random trivia facts. You will also find bios for select characters. If the bios and drawings look familiar, they should. They are directly from Dreamwave's "More Than Meets The Eye" comic series. Same goes for all the drawings on the DVD boxes and discs. 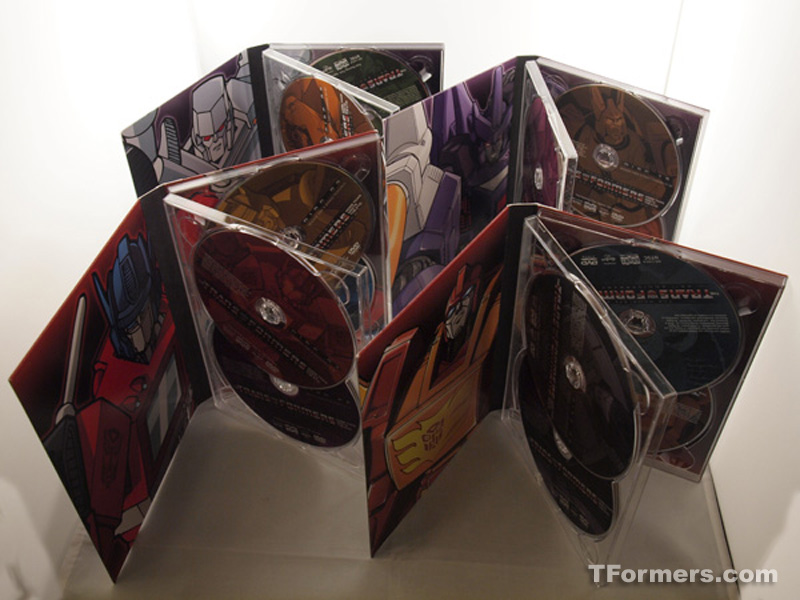 There are 16 DVDs contained in 4 DVD books. Each book features a faction leader highlighted by an outline and a disc number on the front. On the back, you will find the contents of each DVD. Here is the breakdown: 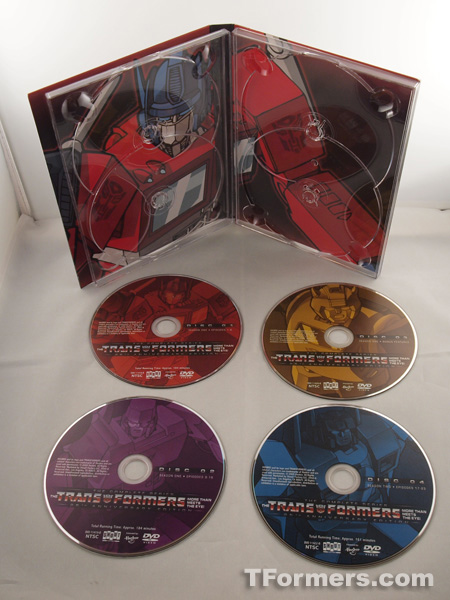 More Than Meets The Eye, Parts 1-3 Transport to Oblivion
Roll For It
Divide And Conquer
Fire In The Sky
S.O.S. Dinobots

Fire On The Mountain
War Of The Dinobots
The Ultimate Doom, Parts 1-3
Countdown To Extinction
A Plague Of Insecticons
Heavy Metal War 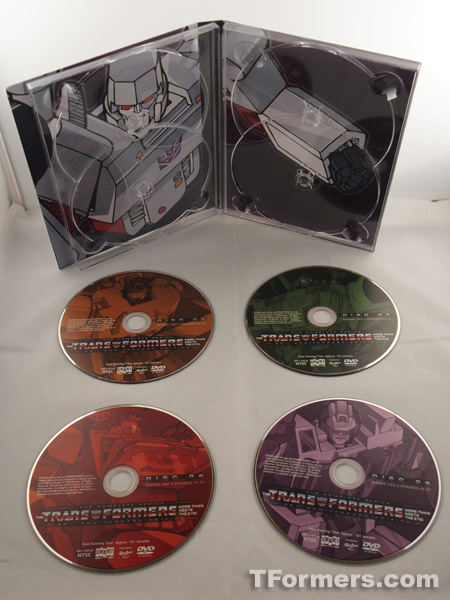 A Prime Problem
Atlantis, Arise!
Attack Of The Autobots
Microbots
The Master Builders
The Insecticon Syndrome
Day Of The Machines 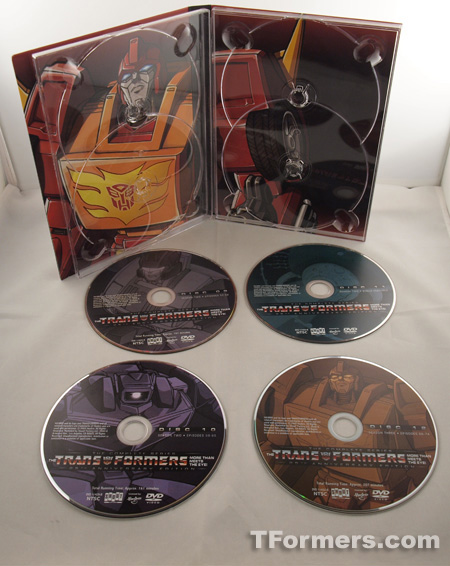 The Five Faces of Darkness, Parts 1-5
The Killing Jar
Chaos
Thief In The Night
Fight Or Flee 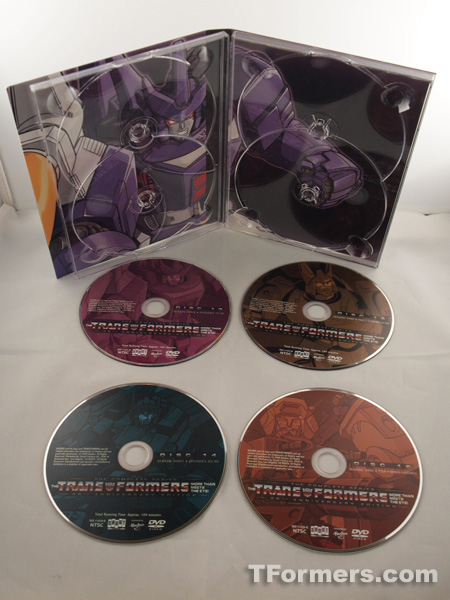 The Burden Hardest To Bear
The Face of the Nijika
Dark Awakening
The Return Of Optimus Prime, Parts 1-2

For DVDs 1-11, you will get the Season 1 intro music. For DVDs 12-16, you will be greeted with the Season 3 intro music. Either way, you start with a red grid that has the familiar Transformers block lettering which shifts between Autobot and Decepticon before zooming out. For DVDs 1-11, the grid will then tilt and turn blue. For Discs 12-16, the grid will tilt but remain red. With all the DVDs, you will then be greeted with various animations. Some are of the bumpers used between commercials, others are points in the show where the characters transform. You will also be given two options: Play All or Episodes.

One nice feature built in deals with the multi-part episodes (The Five Faces Of Darkness, for example). Should you choose to Play All from the title menu, it will prompt you if you want to run all the multi parts together. If you select yes, it will bypass all the intros and outros between the parts. You will only get the intro for Five Faces Pt 1 and it will run all the way through Pt 5, where you will get one outro. There will be no prologues or epilogues in between. Also, with Discs 1-11, choosing Play All will give you the infamous Optimus Prime tagline. Choosing Episodes (or the various extras) will present you with a faction symbol that transforms into a monitor. You can then make your choices.

If you were hoping for any better video quality, don't do it. The quality of the video is exact to the Rhino releases. However, the sound gaffes that Rhino left in have been pulled out of this run. No more random booms! Also, the audio has been updated to stereo sound from the original source, so goodbye mono! As for the extras, allow 20-30 minutes for each documentary or interview. The galleries are best viewed on computer, as they go into a timer mode on a TV. My favorite extra has to be Headmasters, as it unites some of the quintessential voice actors of the show for reminiscing. The fan art section also has some niceties. As for the Concept Art, it's basically line drawings of all the characters used. Nothing new.

When the Rhino sets were released, each one could easily set you back $40-50. That means the complete set could cost you well over $200... if you could find them all. This boxed set, in comparison, will give you everything in one neat package for just $140. That being said, you can so far have the first 3 DVDs in one neat DVD set for $29.99 MSRP. I've seen this set at Target for $20 regular price, $17 on sale. Should that hold true for the other 4 releases, then you could get all of the episodes for $100 between 5 sets. Furthermore, all the extras on this complete set are more than likely going to be on the individual DVD set runs at stores. However, you'll have to wait until September for the 2nd set release at stores. Ordering the complete box set now will get you all 98 episodes now, for a $40 premium, thus saving you the hunt.

So what do you get for the extra $40? Well, you get the nice box that everything comes in, the 60 page book with complete episode listings and the 2 magnets. It's a very nice setup, if not slightly pricey in comparison to waiting for the individual DVD runs. They could have set this set apart by offering exclusive extras NOT offered on the smaller sets. It's a possibility that it could happen, as details on the remaining store sets have not been released. Only time will tell.