For all the talk we heard about possible combiners coming out, on the toy front it's looking like a bust. However, not all is lost. We do get a 2 for 1 special, with Skids and Mudflap being depicted in their "combined" mode.

Autobot Skid and Mudflap have always been close, but this is a little ridiculous. Equipped with experimental combination technology, they use their newfound ability to help the other Autobots hunt rogue Decepticons wherever they hide. Unfortunately, they have so much difficulty hanging onto each other in vehicle mode that they spend more time struggling to stay on the road than they do fighting. 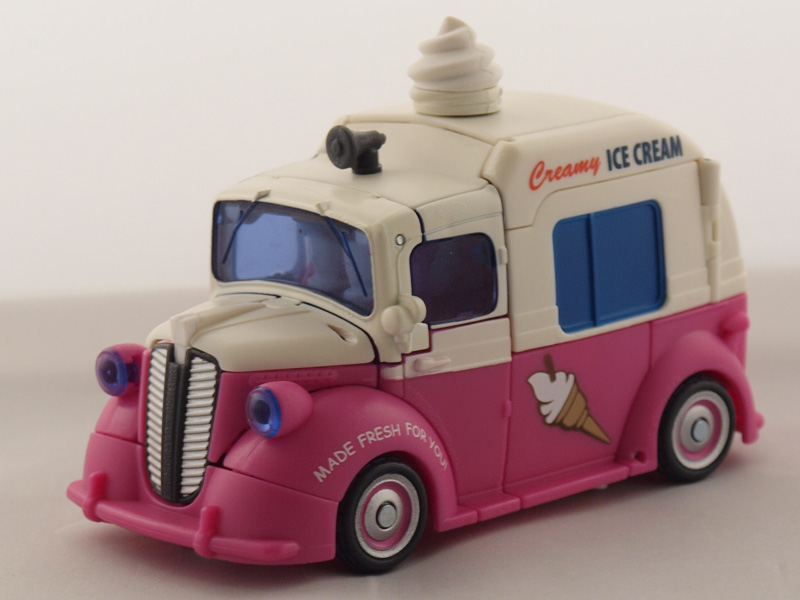 Joined together in alt mode, they form an ice cream truck. The truck is vintage looking, recalling the "Good Humor" type vehicles of the 50s. It is white above the beltline and pink below. The truck is certainly cleaner as a figure than it was shown in the movie. "Creamy Ice Cream" is scripted on the roofline of the truck, with "Made fresh for you!" scripted along the front wheel skirts. 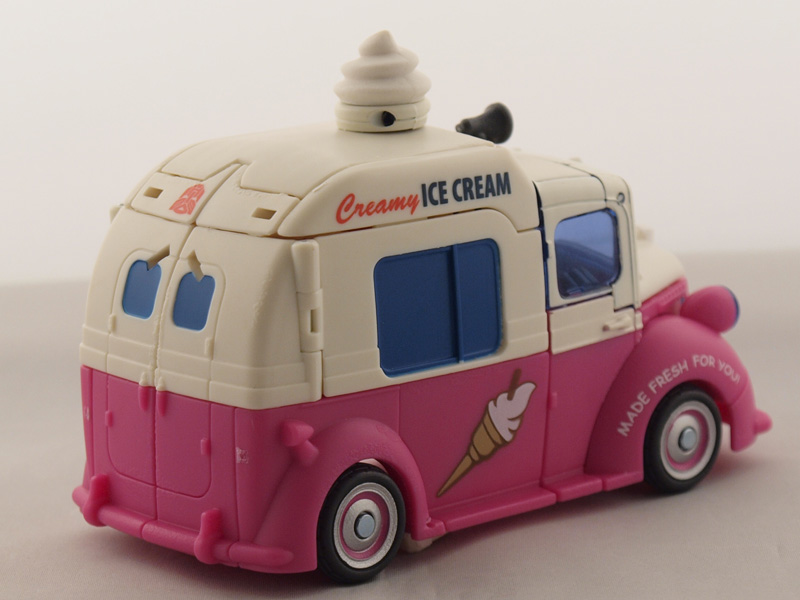 Details are abound, including the speaker on the roof, double doors in the back and a swirly ice cream bust on the roof. No, it does not spin. Perhaps the best part is that you could not tell there were actually 2 robots in this package unless you look underneath. It's a pretty seamless design.

For Skids: Fold the front bumper down. Peel the top of the wheel skirts from the hood, then dislodge the doors from the windows and skirts. Rotate the door panels forward 180 degrees. Flip the feet down from the cockpit, then swivel the bumper/waist 180 degrees. Collapse the legs into the waist. Fold the side windows into the roof. As you pop open the hood, Skids will pop out his head. Cantilever the wheel skirts upward. Fold the hood against the windshield, fold the roof into the cockpit, then rotate the assembly 180 degrees. Straighten out the limbs to finish. 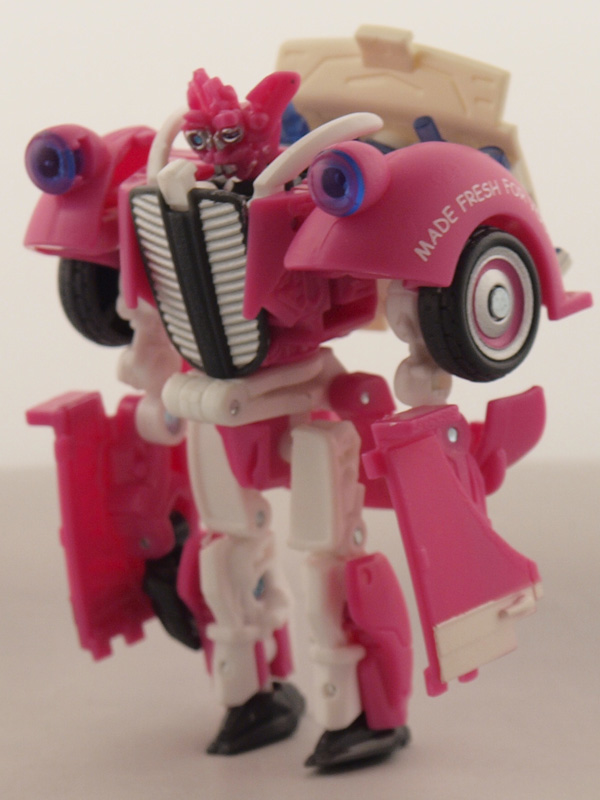 Skids looks rather... puny in robot mode. Compared to his chest area, his legs look like toothpicks. The arms are also disproportionate, hanging down below his knees. The head sculpt is pretty dead on, but the hood emblem blocks most of his head from dead front. 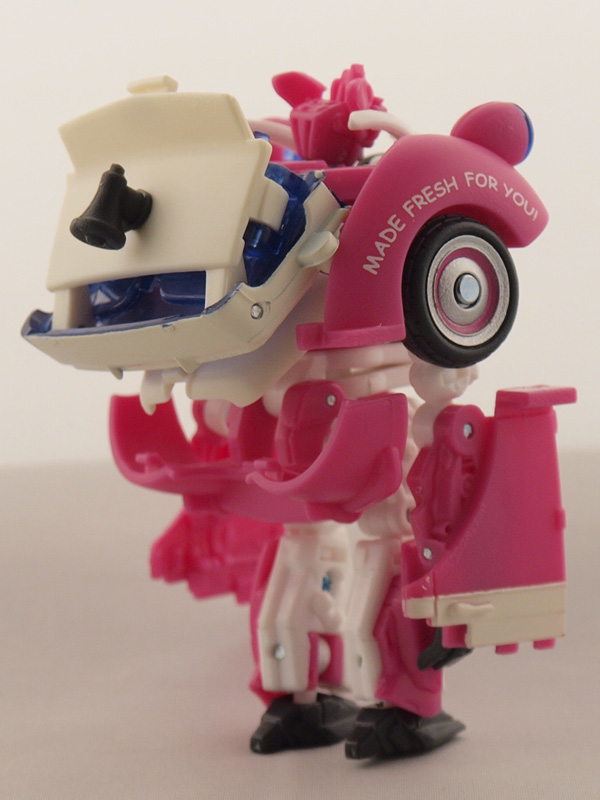 One very annoying trait is the elbow joints. They tend to pop off very easily. Another cheeseball move is with the hands. His right hand has articulation, but the left hand is molded into the door panel and colored to match. Worst of all, the footprint is so small that the top-heaviness of the figure makes it tough to strike a good pose. One last note. When transforming back to alt mode, make sure all the door and hood parts are aligned right and pull up on the hood ornament to lock the hood in place. If not done just right, the head will spring load up past the hood.


The elbows have lots of poseability, if you can keep them in place. Overall articulation is good, but the small footprint can pose problems. 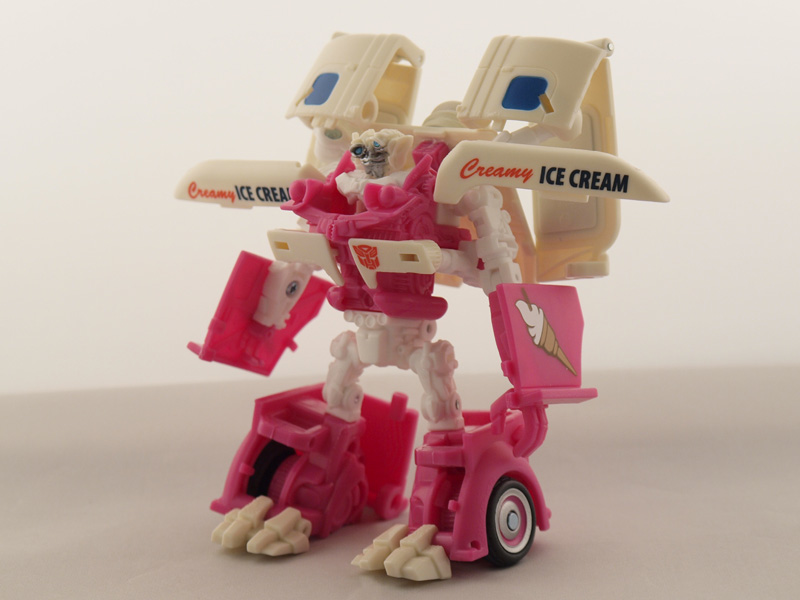 Mudflap looks enormous compared to Skids. He also has more white showing, which makes him look a bit more bland. The head sculpt especially looks bland in all-white (except for the blue eyes). At least he has a big footprint. 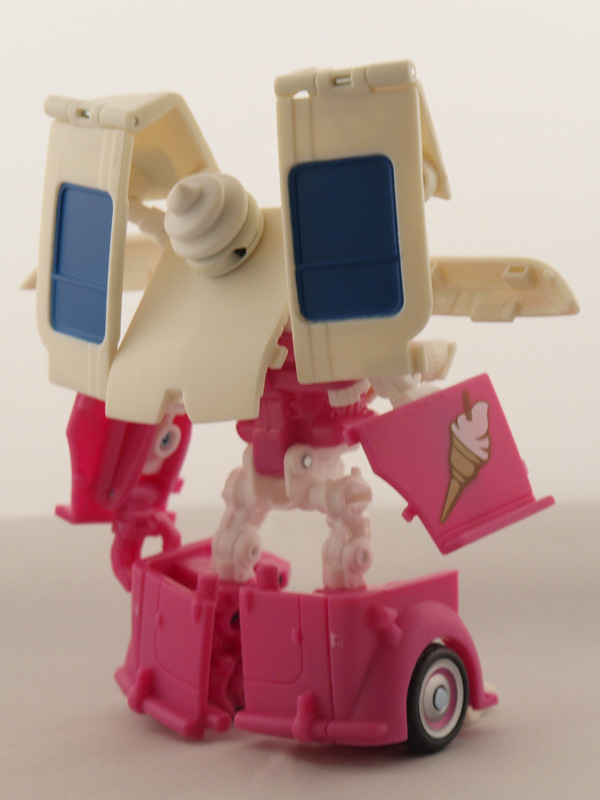 His arms are also an improvement over Skids (because they're on pins, mostly). Mudflap has the same molded hand treatment (albeit on the right side) and suffers from similar top heaviness. The difference here is that Mudflap has the feet to support it. 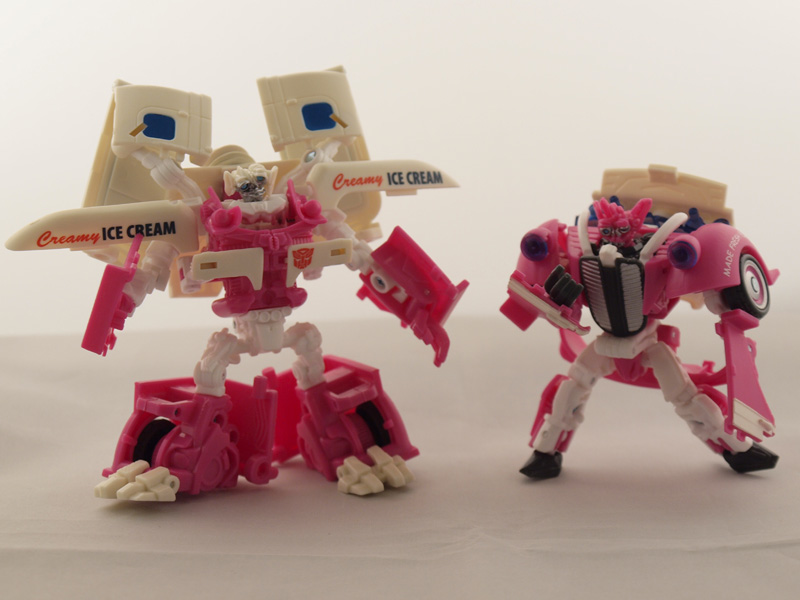 For a deluxe pricepoint, it's worth picking up. Skids' robot mode is the only thing that might make you reconsider